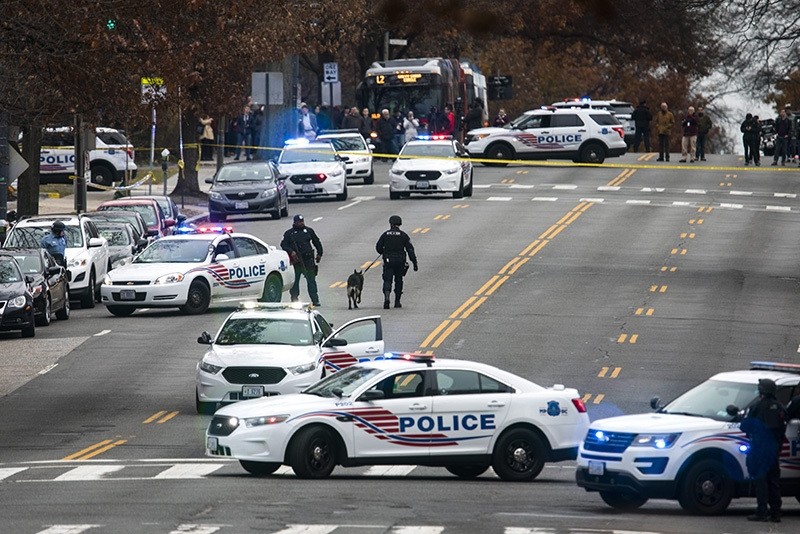 The bizarre rumors began with a leaked email referencing Hillary Clinton and sinister interpretations of references to pizza parties. It morphed into fake online news stories about a child sex trafficking ring run by prominent Democrats operating out of a Washington, D.C., pizza joint.

On Sunday, it culminated in violence when police say a North Carolina man fired an assault rifle multiple times inside the Comet Ping Pong restaurant as he attempted to "self-investigate" the conspiracy theory known in the Twitterverse as "Pizzagate."

No one was hurt and the man was arrested. But the shooting alarmed those from neighboring businesses all the way to the White House about the real life dangers of fake news on the internet. One of those posting on the conspiracy theory is the son of President-elect Donald Trump's proposed national security adviser.

At a first appearance Monday in D.C. Superior Court, Welch appeared handcuffed in a white jumpsuit and was ordered held pending a hearing Thursday. A public defender representing him didn't immediately respond to an email seeking comment.

Comet's owner, James Alefantis, said in a statement Sunday night: "Let me state unequivocally: These stories are completely and entirely false, and there is no basis in fact to any of them. What happened today demonstrates that promoting false and reckless conspiracy theories comes with consequences."

Still, at least one person clinging to the conspiracy theories is prominently connected to Trump's transition team. Michael Flynn Jr. is an adviser to his father, Michael Flynn, whom Trump selected to serve as national security adviser.

Trump's team had no immediate response to questions about the conspiracy theory or the younger Flynn's role in the transition.

Welch was charged on multiple counts, including assault with a dangerous weapon. Police recovered an AR-15 rifle, a Colt .38 handgun, a shotgun and a folding knife.

At an address listed for Welch in Salisbury, a woman drove out as a reporter was approaching and asked him to leave. She then hammered a "no trespassing" sign on a stand by the private driveway.

A Salisbury, North Carolina, police report said Welch hit a 13-year-old pedestrian in October, but was not immediately charged. The teen boy was airlifted to a hospital.

Court records also show Welch pleaded guilty in 2013 to driving while impaired with a blood-alcohol content of .09 and was sentenced to probation and 24 hours of community service. Court documents show he underwent alcohol abuse counseling.

Comet Ping Pong, so named because patrons can play ping pong on tables in its back area, is in a neighborhood of well-tended private homes and apartment buildings on leafy streets dotted by shops, restaurants and the Politics and Prose book store.

While Comet bore most of the scorn heaped by adherents of the Pizzagate conspiracy, businesses all along the block received threats and menacing phone calls, said Bradley Graham and Lissa Muscatine, co-owners of Politics and Prose.

Graham said the store took the threats seriously, reporting them to police. He expressed frustration that police seemed uninterested before Sunday's shooting in investigating more thoroughly.

"We've been trying to deal with this problem for several weeks now," Graham said.

Joseph E. Uscinski, an associate professor in the political science department at the University of Miami, said it isn't the first time a conspiracy theory has led to violence.

"Isolated incidents like this do happen," he said. "Sometimes people believe in conspiracy theories and do act on them," said Uscinski, who co-authored the book "American Conspiracy Theories."

The exact origins of the rumors are murky, though it seems to have gained momentum in the week before the election. Some elements trace back to hacked emails from Clinton Chief of Staff John Podesta released by Wikileaks that refer to pizza parties, with online commentators speculating that "pizza party" is a code word for something more nefarious. By Nov. 3, Comet had been pulled into the conspiracy.

On Sunday, police said, Welch fired several times inside the restaurant. Authorities set up a perimeter and arrested Welch after he walked out with his hands up and unarmed, leaving his weapons inside, according to court records and Interim D.C. Police Chief Peter Newsham.

Court records released Monday showed that Welch "surrendered peacefully when he found no evidence that underage children were being harbored in the restaurant."