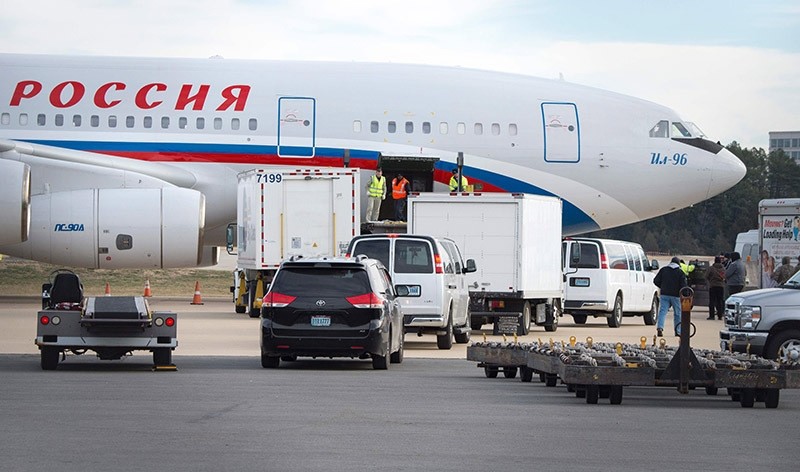 Vehicles pull up to a Russian aircraft that arrived to pick up expelled Russian diplomats at Dulles International Airport December 31, 2016. (AFP Photo)
by Compiled from Wire Services Jan 01, 2017 12:00 am

"The plane took off, everyone has left," RIA quoted the embassy's press service as saying.

Relatives of the diplomats were also onboard, making 96 in all.

Obama ordered the expulsion of 35 Russian suspected spies and imposed sanctions on two Russian intelligence agencies over the hacking of U.S. political groups during the 2016 presidential election.

U.S. intelligence says the Kremlin ordered a hack-and-release of Democratic Party and Hillary Clinton campaign staff emails in a bid to put Donald Trump in the Oval Office.

Thirty-five Russians, described as intelligence operatives based at the Russian embassy in Washington and the consulate in San Francisco, were given 72 hours to leave the country.

Obama also ordered the closure of two Russian compounds in New York and Maryland that the United States says are used "for intelligence-related purposes."

Moscow has repeatedly denied the allegations.

Russian President Vladimir Putin decided not to expel anyone in retaliation, saying he would consider the actions of President-elect Donald Trump, who takes office on Jan. 20, when deciding on further steps in Russia-U.S. relations.