Fire in Chile leaves more than 100 houses in ashes, 19 injured 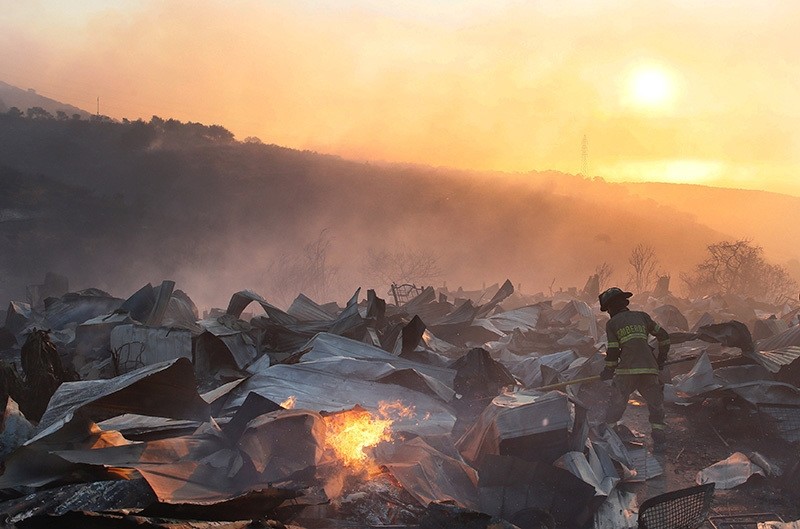 A firefighter removes the remains of a burned house on a hill, where more than 100 homes were burned due to forest fire but there have been no reports of death, local authorities said in Valparaiso, Chile, Jan. 2, 2017. (Reuters Photo)
by Compiled from Wire Services Jan 03, 2017 12:00 am

A firefighter removes the remains of a burned house on a hill, where more than 100 homes were burned due to forest fire but there have been no reports of death, local authorities said in Valparaiso, Chile, Jan. 2, 2017. (Reuters Photo)

Fire driven by strong winds swept over forest land in the hills outside the Chilean port of Valparaiso on Monday, destroying dozens of homes, injuring at least 19 people and sending a pall of heavy smoke down onto the city

Authorities said the blaze started Monday afternoon in the Laguna Verde area and spread to Playa Ancha hill, where many wooden houses are located.

Between and 100 and 120 houses were damaged or destroyed. Officials said a more exact assessment of the damages was expected by Wednesday.

Nineteen people, including four firefighters, were injured and approximately 400 people were evacuated.

Electricity providers said they had cut power to nearly 48,000 customers also as a precaution.

People in Valparaiso wore masks if they ventured into the streets trying to protect themselves against the smoke and fumes.

The fire was brought under control by Monday evening, the fire brigade said.

In the worst-ever fire in Chilean history, 15 people were killed in a blaze in Valparaiso in April 2014.

Laguna Verde lies on the southern outskirts of Valparaiso, a sprawling city built on 40 hills with stunning sea views.

Dubbed the "jewel of the Pacific," the picturesque colonial city is a UNESCO World Heritage Site.

Thousands of tourists come every year to stroll its narrow cobbled streets and ride cable cars up the steep hills.