Americans should be alarmed by Russia's attacks, says Senator McCain 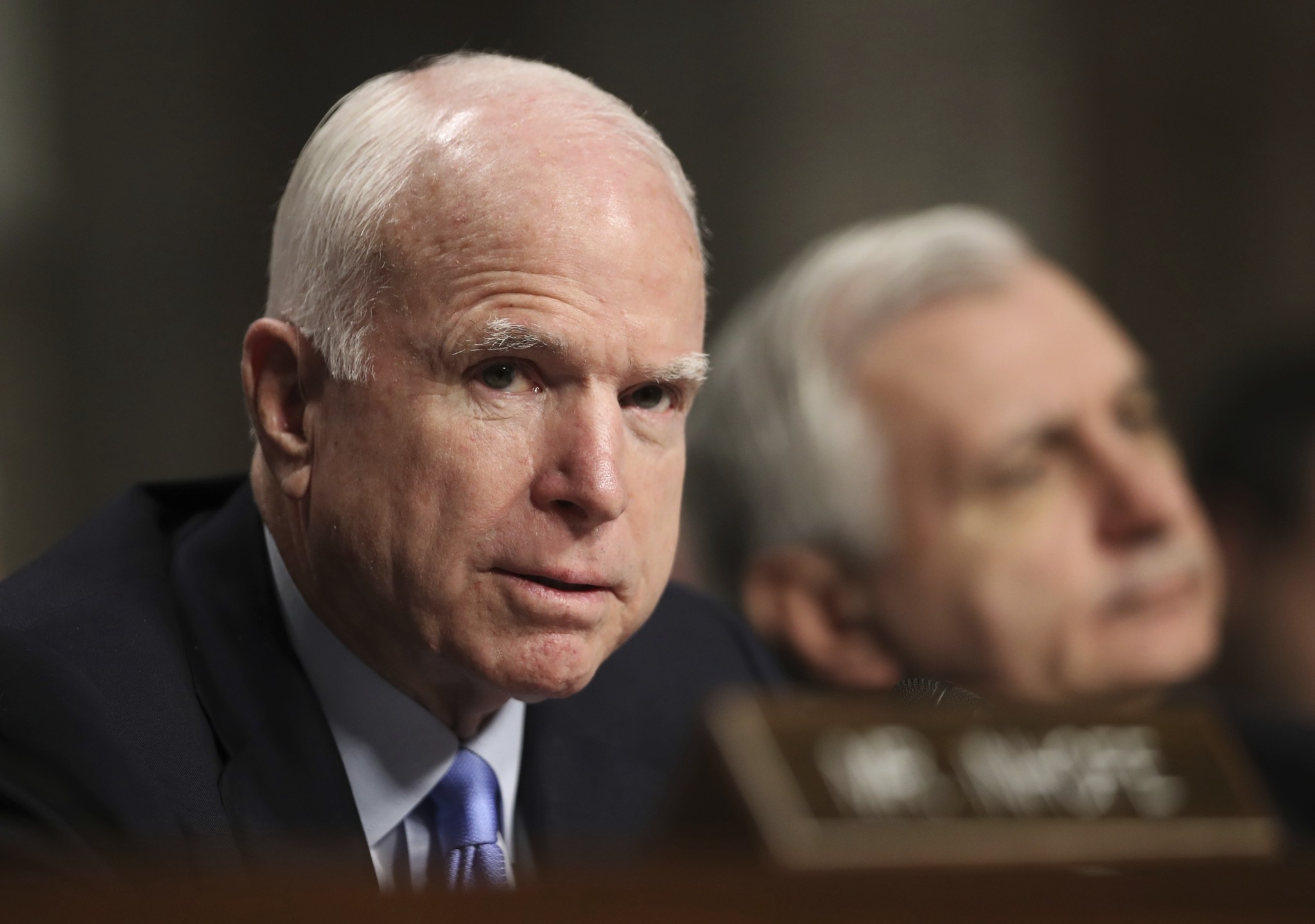 Russia is a major threat to a wide range of U.S. interests because of its "highly-advanced offensive cyber program" and sophisticated capabilities, senior U.S. intelligence officials said on Thursday.

McCain of Arizona, the Republican chairman of the committee, said "every American should be alarmed" by Russia's meddling in the 2016 presidential election. There is "no escaping the fact that this committee meets today for the first time in this new Congress in the aftermath of an unprecedented attack on our democracy," McCain said.

"Russia is a full-scope cyber actor that poses a major threat to U.S. government, military, diplomatic, commercial and critical infrastructure," James Clapper, the Director of National Intelligence, Marcel Lettre, Undersecretary of Defense for intelligence, and Admiral Michael Rogers, director of the National Security Agency, said in joint testimony prepared for a hearing of the Senate Armed Services Committee.

The nation's top intelligence official said that Russia undoubtedly interfered in America's 2016 presidential election but stopped short of the explosive description of "an act of war," telling lawmakers such a call isn't within the purview of the U.S. intelligence community.

In a joint report that roiled the presidential campaign last fall, the Homeland Security Department and the intelligence community said the U.S. was confident of foreign meddling, including Russian government hacking of Democratic emails.

In its assessment, the intelligence community has said Moscow interfered in the election to help Republican Donald Trump win.

"We stand actually more resolutely on the strength of that statement than we did on the 7th of October," James Clapper, the director of national intelligence, told the Armed Services Committee.

Pressed by Sen. John McCain, R-Ariz., on whether the actions constituted an "act of war," Clapper said that was "a very heavy policy call" more appropriate for other entities in the government to decide.

Clapper and other U.S. intelligence said President Barack Obama has received a report on the Russian interference and other foreign meddling in the U.S. election. They said Russia poses a major and growing threat to U.S. government, military, diplomatic and commercial operations.

Clapper said lawmakers will be briefed on the Russian hacking report next week and an unclassified version is tentatively scheduled to be released shortly after that.

Clapper declined to discuss Russia's meddling beyond earlier statements. But he said Russia's hacking "did not change any vote tallies."

The hearing comes a day before the president-elect receives a briefing by the CIA and FBI directors — along with the head of national intelligence — on the investigation into Russia's alleged hacking efforts.

Trump has criticized their findings and even seemed to back WikiLeaks founder Julian Assange's contention that Russia did not provide him with hacked Democratic emails.

In new tweets early Thursday, Trump backed away from his apparent embrace of Assange. Trump blamed the "dishonest media" for portraying him as agreeing with Assange, whose organization has been under criminal investigation for its role in classified information leaks.

"The media lies to make it look like I am against 'Intelligence' when in fact I am a big fan!" Trump wrote.

Clapper told the committee Assange has no credibility.

The committee's session is the first in a series aimed at investigating purported Russian cyberattacks against U.S. interests and developing defenses sturdy enough to blunt future intrusions.

Appearing before the committee were Clapper; Marcel Lettre, the undersecretary of defense for intelligence; and Adm. Michael Rogers, National Security Agency chief and the top officer at the U.S. Cyber Command.

President Barack Obama struck back at Moscow in late December with penalties aimed at Russia's leading spy agencies, the GRU and FSB, that the U.S. said were involved. The GRU is Russia's military intelligence agency. The FSB is the main successor to the Soviet-era KGB.

But Trump easily could rescind the sanctions. So far, he has publicly refused to accept the conclusion that Russia is responsible for the attacks. Trump this week escalated his criticism of U.S. intelligence professionals, such as Clapper, by tweeting, without evidence, that an upcoming briefing on the suspected Russian hacking had been delayed until Friday, and said, "perhaps more time needed to build a case. Very strange!"

Intelligence officials said there had been no delay.

Trump suggested Wednesday in a tweet that one of Russia's primary targets, the Democratic National Committee, could be to blame for being "so careless."

The penalties imposed by Obama came after he pledged a "proportional" response to the hacking of the Democratic Party and presidential nominee Hillary Clinton's campaign chairman. Emails stolen during the campaign were released in the final weeks by WikiLeaks.

CIA Director John Brennan said in a Dec. 16 message to employees that the FBI agreed with the agency's conclusion that Russia's goal was to support Trump in the election. Brennan wrote that he also had spoken with Clapper and said "there is strong consensus among us on the scope, nature, and intent of Russian interference in our presidential election."

Moscow has denied the hacking allegations and dismissed Obama's sanctions as an attempt to "harm Russian-American ties." Although Russian President Vladimir Putin rebuked the Obama administration for trying to punish Russia, he said his country would not immediately retaliate and would instead wait for a new U.S. approach after Trump takes office.