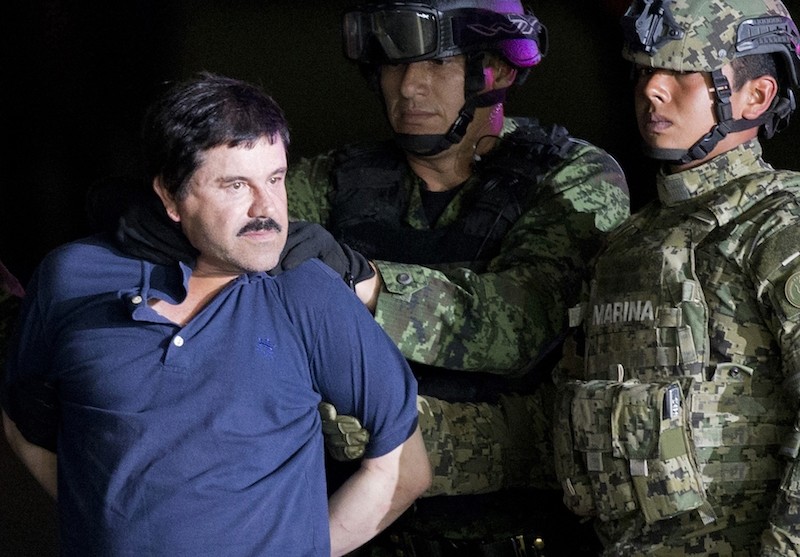 Joaquin ,El Chapo, Guzman is made to face the press as he is escorted to a helicopter by Mexican soldiers at a federal hangar in Mexico City. (AP Archive Photo)
by Associated Press Jan 20, 2017 12:00 am

Infamous Mexican drug kingpin Joaquin "El Chapo" Guzman, who twice escaped from maximum-security prisons in his country, was extradited at the request of the United States to face drug trafficking and other charges and arrived in New York late Thursday.

A plane carrying Guzman landed at a suburban airport, where a caravan of SUVs waited to take him away. Guzman, the convicted leader of the Sinaloa drug cartel, one of the world's largest drug trafficking organizations, was expected to spend the night in a New York jail before his first appearance in a federal courthouse in Brooklyn on Friday, officials said.

Mexico's Department of Foreign Relations announced Guzman was handed over to U.S. authorities for transportation to the U.S. earlier Thursday, the last full day of Democratic President Barack Obama's administration and a day before Republican Donald Trump's scheduled inauguration.

Guzman was taken into custody by the U.S. Drug Enforcement Administration in Ciudad Juarez, a border town across from El Paso, Texas.

Guzman, who's in his late 50s, first escaped from prison in 2001 and then spent more than a decade on the run before he was recaptured, only to escape again in 2015 via a mile-long tunnel dug to the shower in his cell.

The 2015 escape was highly embarrassing for the government of Mexican President Enrique Pena Nieto, and Mexican officials were seen as eager to hand the headache off to the United States afterward. A court denied Guzman's appeal and found his extradition was constitutional, the Mexican Department of Foreign Relations said.

"When he completes his sentence in ... the United States, he will return to Mexico to continue" the prosecutions, he said.

Guzman's lawyers had fought extradition since his 2016 recapture and said Thursday the Mexican government sent him to the United States to distract the public from nationwide protests over gasoline prices.

"It was illegal. They didn't even notify us," lawyer Andres Granados said. "They handled it politically to obscure the situation of the gas price hike. It's totally political."

Besides New York, Guzman faces charges in five other U.S. jurisdictions, including San Diego, Chicago and Miami. He could face the possibility of life in a U.S. prison if convicted.

An indictment in New York accuses him of running a massive drug operation that employed thousands of people, laundered billions of dollars in profits back to Mexico and used hit men to carry out murders, kidnappings and acts of torture.

After his recent escape, he became something of a folk legend for a segment of Mexico's population for his defiance of authorities. He was immortalized in songs known as narco-corridos, ballads about the drug trade and drug bosses.

It was while on the lam the second time, in fall 2015, that he held a secret meeting with actors Sean Penn and Kate del Castillo. The encounter was the subject of a lengthy article Penn published in Rolling Stone last January, right after Mexican marines re-arrested Guzman in the western state of Sinaloa.

In the interview, Guzman was unapologetic about his criminal activities, saying he had turned to drug trafficking at age 15 simply to survive.

"The only way to have money to buy food, to survive, is to grow poppy, marijuana, and at that age, I began to grow it, to cultivate it and to sell it. That is what I can tell you," he was quoted as saying in Penn's article.

The decision by Mexico to extradite one of its most prized prisoners to the U.S. comes as Trump has taken a tough stand on illegal immigration from that country, vowing to build a border wall and make Mexico pay for it. Mexican officials have repeatedly said they will not pay for a wall.

Derek Maltz, who headed the DEA's Special Operations Division until his retirement in mid-2014, said the timing of Guzman's extradition less than 24 hours ahead of Trump's inauguration could be seen as a show of good faith by Mexico.