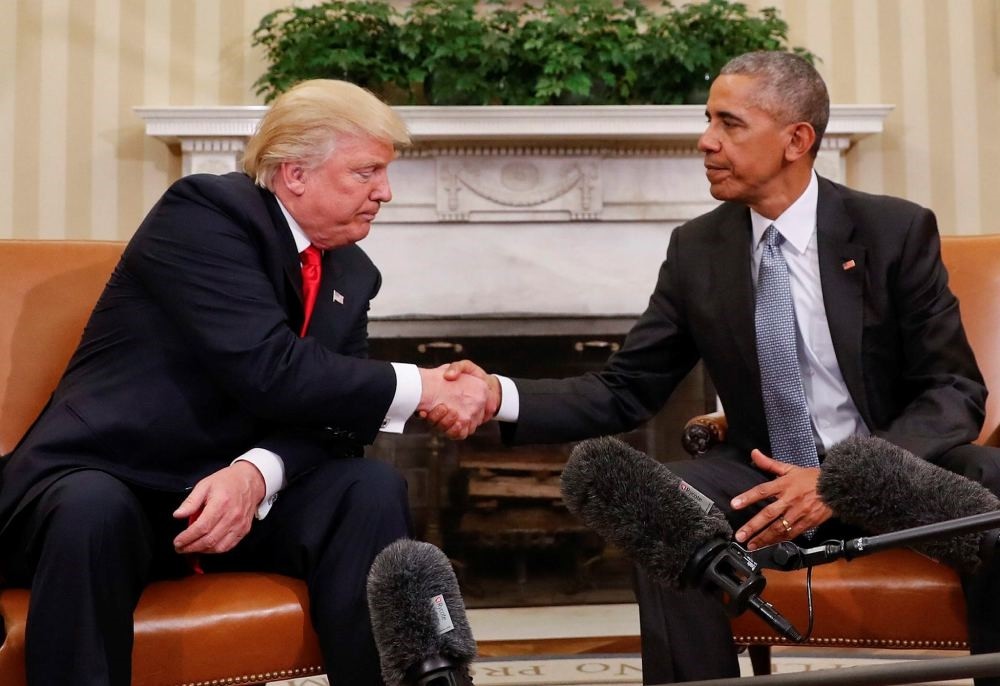 The U.S. President Donald Trump and former president Barack Obama shake hands following their meeting in the Oval Office of the White House in Washington on Nov. 10 2016.
by daily sabah Jan 21, 2017 12:00 am

Ever since Donald Trump was elected U.S. president on Nov. 8, former President Obama has taken several last-minute actions that could mean a more turbulent road for the 45th president of the U.S.

Former U.S. President Barack Obama has made several decisions over the course of the last couple of months with which Donald Trump does not necessarily agree or support. The expulsion of Russian diplomats and the Israel-U.N. resolution are among the actions that could be countermanded by President Trump. There's also the question of commuting the sentences of hundreds of convicts, including an infamous terrorist leader. NATO's buildup in Eastern Europe is also not sitting well with Trump. Obama is probably taking these actions in an attempt to secure his legacy before Trump's inauguration.

Obama has taken several decisions with which the current president doesn't agree. The first spark of conflict and controversy was the United Nations Security Council Resolution No. 2334 (23/12/2016) regarding Israel and settlements in Palestine, which would've traditionally been opposed by the United States as the two countries considered themselves to be close allies; instead the U.S. abstained from the vote thus passing the resolution 14 to 0. The U.S. has used its veto powers to protect Israel on 42 separate occasions, including one in 2011 on a very similar matter during the Obama administration.

Donald Trump reacted by Tweeting: "We cannot continue to let Israel be treated with such total disdain and disrespect. They used to have a great friend in the U.S., but not anymore. The beginning of the end was the horrible Iran deal, and now this [U.N.]! Stay strong Israel, January 20 is fast approaching!" he said.

As a result of accusations of meddling in the U.S. elections by Russian state hackers, President Obama ordered the expulsion of 35 Russian diplomats as retaliation to the allegations.

"I have issued an executive order that provides additional authority for responding to certain cyber activity that seeks to interfere with or undermine our election processes and institutions, or those of our allies or partners," said Obama in a statement on Dec. 29. The diplomats were declared to be "persona non-grata" and "Russian intelligence operatives."

Trump, who's built a reputation because of his will to get along with Russia, said, "It's time for our country to move on to bigger and better things." As president, Trump will have the authority to overturn Obama's decision. So far Moscow has not taken any direct actions for retaliation and it appears that it does not intend to either as part of their foreign policy strategy.

In the first 10 days of 2017, it was reported that NATO was building up a large force in Poland, as it has in the Baltic States as well. Thousands of troops, as well as large numbers of armored vehicles and military equipment have been shipped to Poland as part of a larger NATO buildup in Eastern Europe.

Lieutenant-General Tim Ray, deputy commander of U.S. European Command, stated: "Let me be very clear, this is one part of our efforts to deter Russian aggression, ensure territorial integrity of our allies and maintain a Europe that is whole, free, prosperous and at peace."

Russia has stated that it considers the force to be a threat, especially with the ongoing volatile situation in Ukraine. It has blasted the buildup as "truly aggressive."

Surprisingly Germany did not welcome the escalation, saying that dialogue was a more preferable option to "tanks being on both sides of the border."

Obama has also recently commuted the sentences of 330 non-violent convicted drug offenders. White House officials have stated that this will be Obama's "final act of clemency."

However what has sparked outrage is the fact that he's also commuted the sentence of notorious FALN leader Oscar Lopez-Rivera, who is responsible for 130 terrorist attacks in the United States.

Obama also commuted the sentence of former Army Private Bradley Manning (now Chelsea Manning), as move which was seen as "deeply hypocritical" by a U.S. intelligence official" due to the President's "denunciation of WikiLeaks' role in the hacking of the DNC." The move however was praised by WikiLeaks as well as rights groups.

Sean Spicer said on a Trump transition team's daily conference call that "after the outrage that we've seen about other leaks, and issues that have come up, to see someone who has given away this country's secrets, and been convicted of it through a military court, it's disappointing and it sends a very troubling message when it comes to the handling of classified information".

Spicer also said that Trump felt it was a "double standard" to commute Manning's sentence given the Democrats' outrage over the election period.