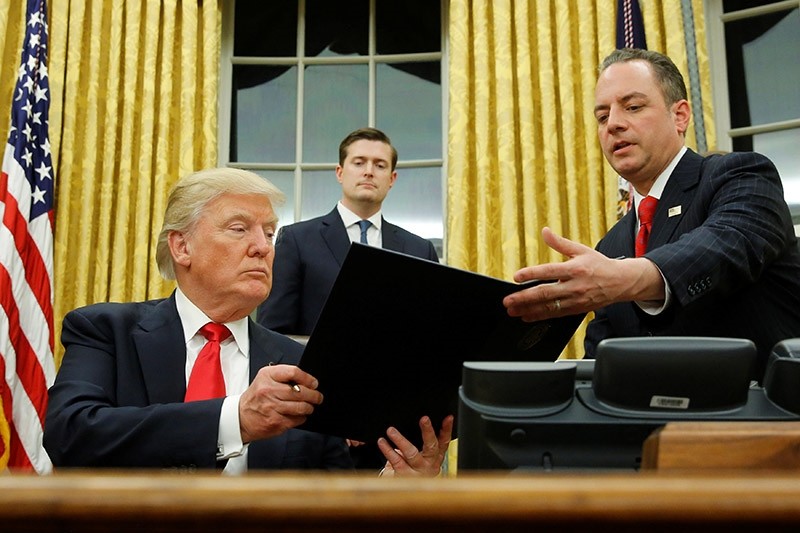 U.S. President Donald Trump hands Chief of Staff Reince Priebus (R) an executive order that directs agencies to ease the burden of Obamacare, after signing it in the Oval Office in Washington, U.S. on Jan. 20, 2017. (Reuters Photo)
by Daily Sabah with AP Jan 22, 2017 12:00 am

Trump has been criticizing Obamacare since day one, saying it is a ‘complete and total disaster’ that needs to be ‘repealed and replaced’

On his first day in office, U.S. President Donald Trump signed an executive order which will be the first step towards repealing and replacing the "Patient Protection and Affordable Care Act (Public Law 111-148)" of April 23, 2010.

Trump has said he wishes to keep parts of Obamacare, such as the coverage of people with pre-existing conditions. He said this "happens to be one of the strongest assets [of the act]" as well as other parts. "Also with the children living with their parents for an extended period, very much try and keep that; adds cost but it's very much something we're going to try and keep," he said.

In his first press conference as president-elect, Trump said Obamacare is "imploding" and to a great extent he is correct.

For the better part of 2016, premiums (taxes that need to be paid to upkeep the plan) have soared as much as 35 percent and predictions for 2017 have only gotten worse. Many middle class families have been forced to pay more for their healthcare insurance than their rent or mortgage.

Deductibles and copay's are also getting higher. In June and October of 2015, Assurant Health and United Health Group declared they lost billions due to Obamacare and will pull out of the plan.

The original vision of Obamacare was to provide the lower class with free healthcare. While this has worked for poor people and patients with important illnesses, it has hurt the middle class significantly and it is predicted that it will only continue to do so because their premiums are doubling and tripling.

Obamacare is also hostile to competition as it does not allow insurance companies to offer their services nationwide (as is done in the EU for example) and have to do so filing access on a state-by-state level which requires extreme amounts of time and money. Because of this, monopolies are created in each state, as it is harder for an insurance company from one state to gain access to the market of another state.

Insurance companies do not cover people with pre-existing conditions. It is essentially a middle-ground solution that is not providing affordable healthcare for everyone and has not eased on competition, which means that both the people and the companies are being dried of their money for a plan that does not work for the majority of Americans.

In just one state in Jan. 30, 2016, Blue Cross Blue Shield announced that it had lost $400 million in North Carolina after offering an Affordable Care Act (ACA) plan. Instead of providing universal coverage Obamacare has given poor people free healthcare but at the expense of middle-class families that could barely afford any healthcare in the first place, especially if one suddenly experienced a serious condition.

It is mainly believed that one of the reasons why Hillary Clinton lost the election was because she was an open supporter of Obamacare and did not see anything essentially wrong with it. Meanwhile, the Blue State citizens that gave Obama two terms in 2009 and 2012 are paying $1000 per person for health insurance that doesn't work. This is probably one of the reasons why states like North Carolina, Iowa, Ohio, Michigan, Wisconsin and, crucially, Pennsylvania and Florida flipped in favor of Trump in the Nov. 8 election.

Q: What does the order do?

A: Trump's order states that federal agencies can grant waivers, exemptions and delays of "Obamacare" provisions that would impose costs on states or individuals. That language appears to be aimed squarely at undoing the law's unpopular requirement that individuals carry health insurance or face fines — a key provision of the measure former President Barack Obama signed in 2010.

It's not spelled out whether the IRS could waive the fines for failing to secure coverage and the White House has not explained how it wants agencies to respond to the order.

The measure also directs agencies to stop issuing regulations that would expand the health care law's reach. And it says the federal government must allow states greater flexibility in carrying out health care programs.

"It's a sign that the Trump administration is looking to unwind the law in every way it can administratively," said Larry Levitt of the Kaiser Family Foundation, a nonpartisan clearinghouse for information and analysis about the health care system.

Q: Will people who get insurance under "Obamacare" lose their coverage as a result of Trump's order?

A: The order doesn't directly target the insurance marketplace at the center of the health care law. But some experts say that if the directive leads to broad exemptions from the law's coverage requirement, it could scare off insurers.

Insurers see the coverage requirement, or so-called individual mandate, as an essential tool to nudge healthy people into the coverage pool. Without it, the companies and most independent experts believe premiums would spike, making HealthCare.gov's insurance markets unsustainable.

Leslie Dach, campaign director of the Protect Our Care Coalition, issued a statement saying, "While President Trump may have promised a smooth transition, the executive order does the opposite, threatening disruption for health providers and patients." He called the executive order "irresponsible."

Q: How quickly will any changes take effect?

A: The executive order may not have much impact for 2017, since government rules for this year have already been incorporated into contracts signed with insurance companies.

Departments like Health and Human Services and Treasury will have to issue policies that embody the new president's wishes.

The Trump administration can rewrite regulations carrying out the legislation. New regulations cannot be issued overnight, but would have to follow a legally established process that requires public notice and an opportunity for interested parties to comment on the administration's changes.

Q: What is Congress' plan for the Affordable Care Act?

A: With Republicans in control of both the White House and Congress, undoing Obama's health care law is at the top of the party's agenda for 2017.

There's broad agreement among Republicans that the law should be repealed. But lawmakers are far less unified about what should take its place and how quickly a new measure should take effect.

Shortly before taking office, Trump said he wanted Congress to pass repeal and replace measures "essentially simultaneously." That put some Republicans on edge, given the complexities of unwinding the current law.

Trump has also been vague about what he wants included in a replacement package, saying his administration will have a plan after the Senate confirms his nominee to lead the Department of Health and Human Services, Rep. Tom Price.

The president has said he wants to keep some of the measure's more popular elements, including allowing young people to stay on their parents' insurance until age 26 and preventing insurance companies from denying coverage to people with pre-exiting conditions.