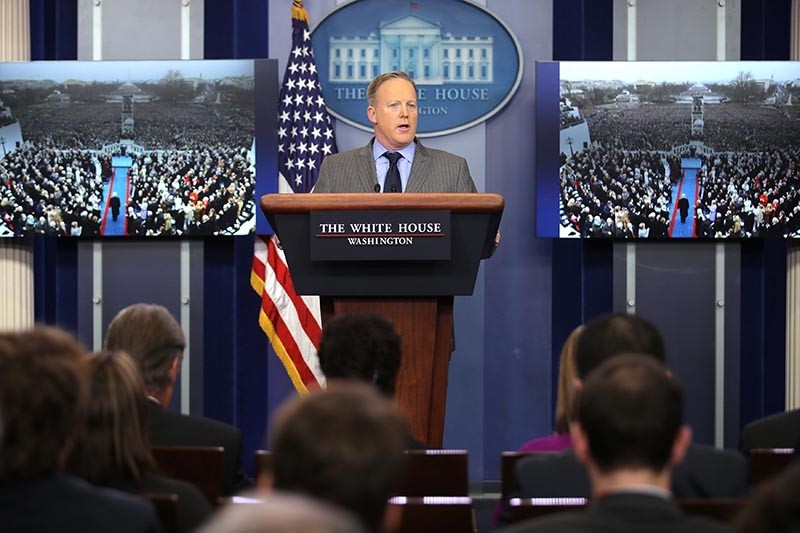 Donald Trump's Press Secretary criticized U.S. media for "deliberate false reporting" over the number of people who attended the president's inauguration on Friday.

In an unusual and fiery statement on Saturday night, White House spokesman Sean Spicer lashed out about tweeted photographs that showed large, empty spaces on the National Mall during the ceremony on Friday.

"This was the largest audience ever to witness an inauguration, period. Both in person and around the globe," Spicer said in a brief statement. "These attempts to lessen the enthusiasm about the inauguration are shameful and wrong."

Aerial photographs showed that the crowds for Trump's inauguration were smaller than in 2009.

Spicer's rebuke followed a larger-than-expected turnout for women's marches protesting Trump across the United States on Saturday, including at the flagship event in Washington, where a crowd of hundreds of thousands clogged the streets and appeared to be larger than those who came for Trump's inauguration.

Spicer, who did not take questions from reporters, said spaces for 720,000 people were full when Trump took his oath.

He also said the National Park Service does not put out official crowd counts. "No one had numbers."

On Saturday, Metro reported ridership of 275,000 at 11 a.m. as it struggled to handle the crowd converging on downtown Washington for the protest march.

Trump has long used the media as a foil during his unconventional climb to the White House. On Saturday, he blamed the media for making up his feud with the CIA over its investigation into Russian hacking.

Spicer also criticized a reporter who made an error in a pool report during a brief ceremony in the Oval Office on Friday. Earlier, Trump called out the reporter by name at the CIA headquarters.

"There's been a lot of talk in the media about the responsibility to hold Donald Trump accountable, and I'm here to tell you it goes two ways. We're going to hold the press accountable as well," Spicer said.