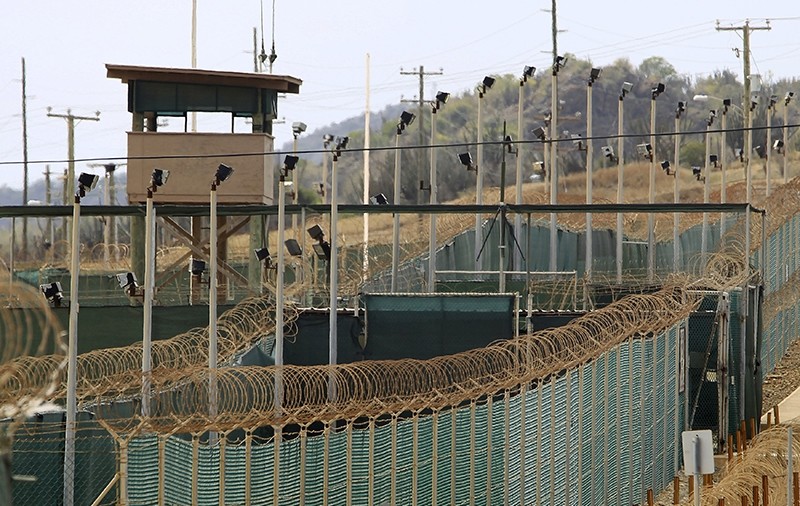 The exterior of Camp Delta is seen at the U.S. Naval Base at Guantanamo Bay (Reuters Photo)
by Jan 25, 2017 12:00 am
U.S. President Donald Trump is expected to order a review that could lead to the reinstatement of a CIA program to hold terrorist suspects in secret overseas "black site" prisons that used interrogation techniques often condemned as torture, two U.S. officials said on Wednesday.

The black sites were used to detain suspects who were captured in the "war on terrorism" launched by former President George W. Bush after the Sept. 11, 2001 attacks.

The officials said Trump is expected to issue an executive order in the next few days. It would call for a high-level review into "whether to reinitiate a program of interrogation of high-value alien terrorists to be operated outside the United States" and whether the CIA should run the facilities," according to a copy of the draft published by the Washington Post.

There is widespread opposition in Congress, in U.S. intelligence agencies and within the military to reopening black sites and revisiting the use of harsh interrogation techniques, according to the serving officers.

"The President can sign whatever executive orders he likes. But the law is the law. We are not bringing back torture in the United States of America," Senator John McCain, a Republican, said in a statement.

Asked about the issues, Trump administration spokesman Sean Spicer said the draft was not a White House document.

The CIA black sites were located in Poland, Lithuania, Romania, Thailand and Afghanistan.

In 2006, Bush ended the use of harsh interrogation techniques and closed all the blacks sites except for one in Kabul.

Trump's draft order also would authorize a review of interrogation techniques that U.S. officials could use on terrorism suspects, and keep open the detention center at the U.S. naval base in Guantanamo Bay, Cuba and send new prisoners there.

Trump vowed during the 2016 election campaign to resume water boarding and a "hell of a lot worse."

The draft on the Washington Post web site says that, "No person in the custody of the United States shall at any time be subjected to torture, or cruel, inhuman or degrading treatment or punishment, as proscribed by U.S. law."

However, the Justice Department under Trump could issue an interpretation of U.S. law that allows for the use of harsh interrogation techniques as occurred in the so-called "Torture Memos" drafted under the Bush administration in 2002 and subsequently withdrawn.

Human rights groups decried any attempt to bring back the black sites.

"This is an extremely disturbing and outrageous attempt to open the door again to systematic torture and secret detention. This is the Trump administration making good on its most worrisome comments during the campaign," said Naureen Shah, Amnesty International USA's director of national security and human rights.

Trump's order, if enacted, could put new CIA Director Mike Pompeo in a tight spot given that his workforce, according to multiple serving officers, largely opposes reinstating the "black sites" program.

As a conservative congressman from Kansas, Pompeo defended the CIA's use of harsh interrogation techniques, arguing that they produced useful intelligence.

During his confirmation hearing for CIA director, he pledged he would "absolutely not" reinstate those methods. Yet in written responses to questions from Senate Intelligence Committee members, he appeared to leave the door open to restoring them.

"If experts believed the current law was an impediment to gathering vital intelligence to protect the country, I would want to understand such impediments and whether any recommendations were appropriate for changing current law," Pompeo wrote.