At least 6 dead after gunmen attack mosque in Canada's Quebec 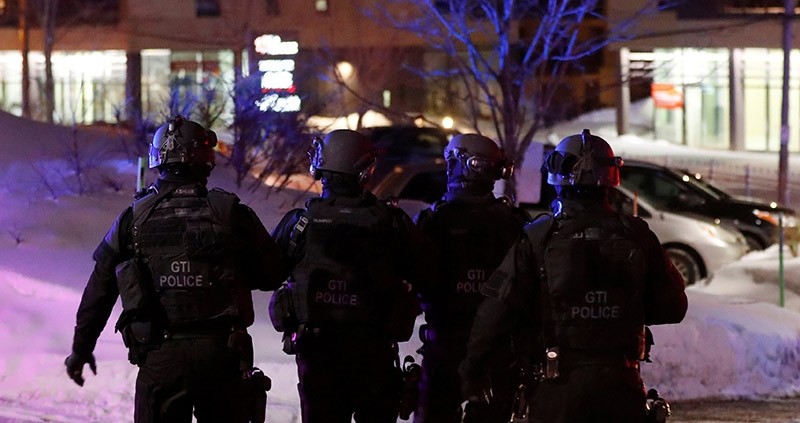 A Quebec police spokesman confirmed that there were people killed, but did not say how many.

Two suspects were under arrest after the shooting he said.

One was French-Canadian, the other was of Moroccan heritage, and at least one of them was a student at nearby Université Laval, the source said.

One of the suspects was identified as Alexandre Bissonnette, a French-Canadian, the other as Mohamed Khadir, who is of Moroccan heritage although his nationality was not immediately known, according to the source.

Police declined to give details of the suspects' identities or possible motives for the attack during evening prayers at the Centre Culturel Islamique de Québec.

"Legal procedures are now underway and we cannot make any comment on the identity of the suspects," Royal Canadian Mounted Police national security superintendent Martin Plante told a news conference. He added the suspects, both men, were not previously known to police.

One suspect was arrested at the mosque, where police were called at about 8 p.m. local time, and the other turned himself about an hour later, Quebec City Police Inspector Denis Turcotte said.

Police said they were confident there were no other suspects involved in the attack.

Police did not rule out the possibility of a third suspect who had fled the scene.

A few dozen people were inside the Islamic Cultural Center when the shooting began just after 8:00 pm (0100 GMT Monday), CBC reported, citing its French-language service Radio-Canada.

According to CBC, Quebec City Police Constable Etienne Doyon said at the time of the attack mostly men were gathered at the mosque for evening prayers.

Quebec's prime minister, Philippe Couillard, said in a series of Twitter posts that the government was "mobilized to ensure the security of the people of Quebec."

The Islamic Cultural Center of Quebec, which is also known as the grand mosque of Quebec, had already been the target of hate: a pig's head was left on the doorstep last June during the Muslim holy month of Ramadan.

The attack comes as Canada has vowed to open its arms wide to Muslims and refugees after U.S. President Donald Trump's controversial immigration ban Friday sparked travel chaos and outrage around the world.

Canada will offer temporary residence permits to people stranded in the country as a result of Trump's order, the immigration ministry said Sunday.

"Let me assure those who may be stranded in Canada that I will use my authority as minister to provide them with temporary residency if needed as we have done in the past," Immigration Minister Ahmed Hussen said at a news conference.

Trump has suspended the arrival of all refugees to the US for at least 120 days and barred entry for 90 days to people from seven Muslim-majority countries: Iran, Iraq, Libya, Somalia, Sudan, Syria and Yemen.

Hussen, who is of Somali origin, did not condemn the U.S. measure but stressed that Canada would continue to pursue an immigration policy based on "compassion" while at the same time protecting the security of its citizens.

"We welcome those fleeing persecution, terror and war," he said, echoing a welcoming Twitter post by Prime Minister Justin Trudeau on Saturday.

According to the latest Canadian census, from 2011, one out of five people in the country are foreign-born.

Canada has welcomed more than 39,670 Syrian refugees between November 2015 and early January 2017, according to government figures.