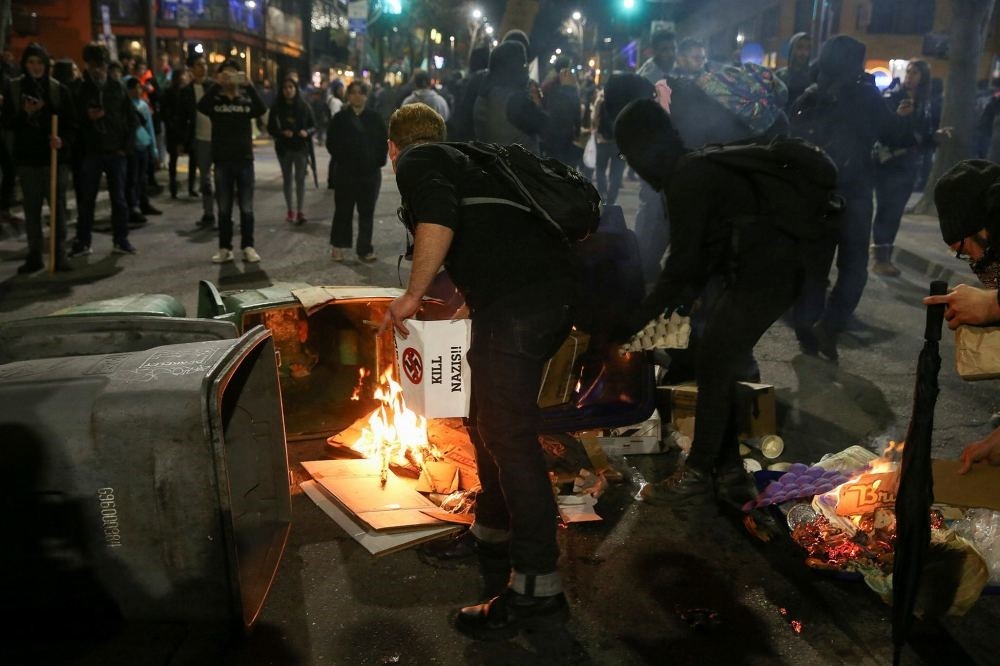 by Compiled from Wire Services Feb 03, 2017 12:00 am
A crowd protesting a far-right commentator's appearance at the University of California at Berkeley hurled smoke bombs, broke windows and sparked a massive bonfire, prompting officials to call off the event. The decision came two hours before Wednesday's talk by Milo Yiannopoulos, a polarizing editor of Breitbart News, after some 1,500 people had gathered outside the venue.

Police ordered protesters to disperse as the school put the campus on lockdown. Protesters also tossed bricks and fireworks at police in riot gear who fired rubber pellets back at the crowd, according to SFGate.com, a news outlet in San Francisco. "We shut down the event. It was great. Mission accomplished," a protester told CNN.

Some 150 "masked agitators" were responsible for the violence during the otherwise largely peaceful protest of about 1,500 people, the university said in a statement, noting that the school "is proud of its history and legacy as home of the Free Speech Movement" in the 1960s.

Yiannopoulos, a 32-year-old right-wing provocateur, is a vocal supporter of President Donald Trump and a self-proclaimed internet troll whose comments have been criticized as racist, misogynist, anti-Muslim and white supremacist. He was banned from Twitter after leading a harassment campaign against "Ghostbusters" actress Leslie Jones.

His visit to Berkeley was sponsored by the campus Republican club. The university has stressed it did not invite him and does not endorse his ideas but is committed to free speech and rejected calls to cancel the event.

"The event has been cancelled," Yiannopoulos posted on his Facebook page. "I'll let you know more when the facts become clear. One thing we do know for sure: the Left is absolutely terrified of free speech and will do literally anything to shut it down."

The Berkeley College Republicans said its "constitutional right to free speech was silenced by criminals and thugs."

Many of Trump's executive orders and proposed policies, including his suspension of the U.S. refugee program and temporary ban on travelers from seven Muslim-majority countries, have been met by largely peaceful protests that have drawn tens of thousands of people across the United States.
Last Update: Feb 03, 2017 1:41 am
RELATED TOPICS