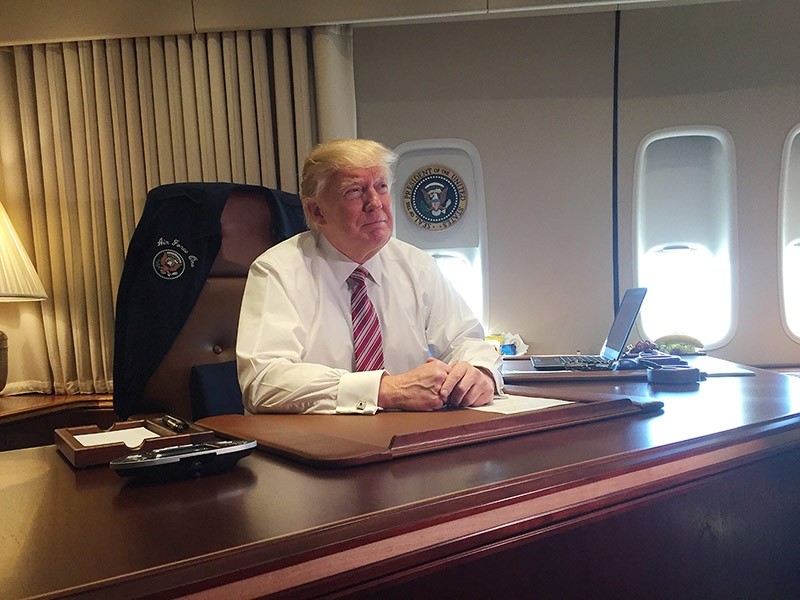 US President Donald J. Trump sits at his desk aboard Air Force One during his first official trip as President en route to Philadelphia, Pennsylvania. Jan. 2017. (EPA Photo)
by Daily Sabah Feb 06, 2017 12:00 am

: Referring to Iran as ‘the number one terrorist state,’ President Trump escalates tension between the two countries after Iran test-fired a new ballistic missile last week, prompting Washington to impose some new sanctions on Tehran

U.S. President Donald Trump told Fox News that Iran is "a terrorist state" on Sunday, while also accusing the country of lacking respect for the U.S.

Trump, in line with his previous messages shared on social media, blamed the Obama administration for making a ''stupid'' agreement with Tehran, referring to its nuclear program. According to Trump, the deal is in Iran's favor and has saved the country from "collapsing."

Iran is rapidly taking over more and more of Iraq even after the U.S. has squandered three trillion dollars there. Obvious long ago!


''That is the worst deal I have ever seen,'' said Trump, while also noting that Iran had lost respect for the U.S. because it thought the government was foolish for making such a deal.

Referring to Iran as "the number one terrorist state," the U.S. president said the Middle Eastern country supplies money and weapons to terrorist groups.

Iran is playing with fire - they don't appreciate how "kind" President Obama was to them. Not me!


The Trump administration hit the ground running, re-imposing sanctions against Iran in its first weeks in office, and also instating restrictions against those who are complicit with Tehran.

Yesterday, the Kremlin said it did not agree with President Trump's assessment of Iran as "the number one terrorist state" and wanted to deepen what it described as already good ties with Tehran.

The Kremlin responded to comments made by Trump to Fox News in an interview aired over the weekend in which he complained that Iran had a "total disregard" for the United States.

In a conference call with reporters, Kremlin Spokesman Dmitry Peskov said Moscow saw things differently. "Russia has friendly partner-like relations with Iran. We cooperate on a wide range of issues, value our trade ties and hope to develop them further," said Peskov.

Trump and Putin say they want to try to rebuild U.S.-Russia ties that were badly damaged by Moscow's 2014 annexation of Crimea and by Western sanctions imposed on Russia in response.

Peskov said there was no reason for policy differences over Iran to hinder such a rapprochement.

"It is no secret to anyone that Moscow and Washington hold diametrically opposed views on many international issues," said Peskov. "That should not be an obstacle when it comes to forging normal communication and pragmatic mutually beneficial relations between Russia and the United States," he added. Separately, Russia criticized the Trump administration's move on Friday to impose sanctions on Iran after a recent ballistic missile test, saying the test did not violate existing agreements.

"We are sorry that things are working out in this way," Sergei Ryabkov, Russia's deputy foreign minister, was quoted by the RIA news agency regarding the new sanctions yesterday.

U.S.-Iran relations have become more hostile than ever as the White House takes an aggressive stance toward Tehran over test-firing a ballistic missile that could raise tensions in the already chaotic region.

International sanctions on Tehran were lifted in January of last year under a nuclear deal brokered in 2015 by Britain, France, Germany, China, Russia and the United States.

Under the nuclear deal, Iran agreed to curb its nuclear program in exchange for most of the sanctions being lifted. According to a 2015 U.N. resolution endorsing the deal, Iran required to refrain from working on ballistic missiles designed to deliver nuclear weapons for up to eight years.

News of Iran's reported cruise missile test came hours after Washington said it was putting Iran "on notice" for its tests and signaled that it could impose new sanctions.

On Wednesday, Iran confirmed that it had test-fired a new ballistic missile but said the test did not breach the Islamic Republic's nuclear agreement with world powers or the U.N. Security Council resolution endorsing the pact.

Iran has test-fired several ballistic missiles since the nuclear deal in 2015, but the latest test was the first since Trump became president.