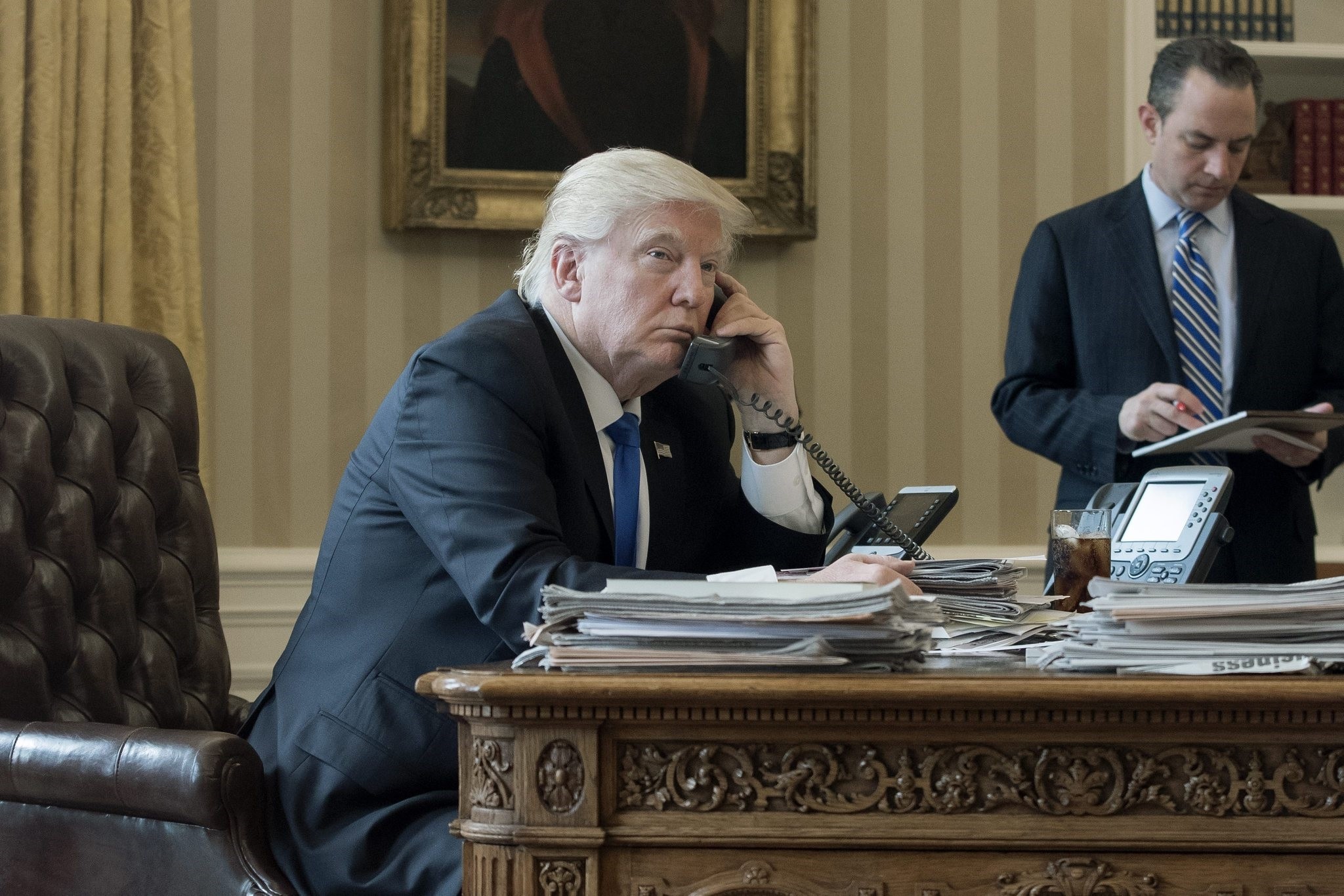 US President Donald J. Trump (L) speaks on the phone with President of Russia Vladimir Putin in the Oval Office of the White House in Washington, DC, USA, 28 January 2017. (EPA Photo)
by Feb 09, 2017 12:00 am
In his first call as president with Russian leader Vladimir Putin, Donald Trump denounced a treaty that caps U.S. and Russian deployment of nuclear warheads as a bad deal for the United States, according to two U.S. officials and one former U.S. official with knowledge of the call.

When Putin raised the possibility of extending the 2010 treaty, known as New START, Trump paused to ask his aides in an aside what the treaty was, these sources said.

Trump then told Putin the treaty was one of several bad deals negotiated by the Obama administration, saying that New START favored Russia. Trump also talked about his own popularity, the sources said.

The White House declined to comment. It referred Reuters to the official White House account issued after the Jan. 28 call, which did not mention the discussion about New START.

It has not been previously reported that Trump had conveyed his doubt about New START to Putin in the hour-long call.

New START gives both countries until February 2018 to reduce their deployed strategic nuclear warheads to no more than 1,550, the lowest level in decades. It also limits deployed land- and submarine-based missiles and nuclear-capable bombers.

During a debate in the 2016 presidential election, Trump said Russia had "outsmarted" the United States with the treaty, which he called "START-Up." He asserted incorrectly then that it had allowed Russia to continue to produce nuclear warheads while the United States could not.

Secretary of State Rex Tillerson said he supported the treaty during his Senate confirmation hearings.

During the hearings Tillerson said it was important for the United States to "stay engaged with Russia, hold them accountable to commitments made under the New START and also ensure our accountability as well."

Two of the people who described the conversation were briefed by current administration officials who read detailed notes taken during the call. One of the two was shown portions of the notes. A third source was also briefed on the call.

Reuters has not reviewed the notes taken of the call, which are classified.

The Kremlin did not immediately respond to requests for comment.