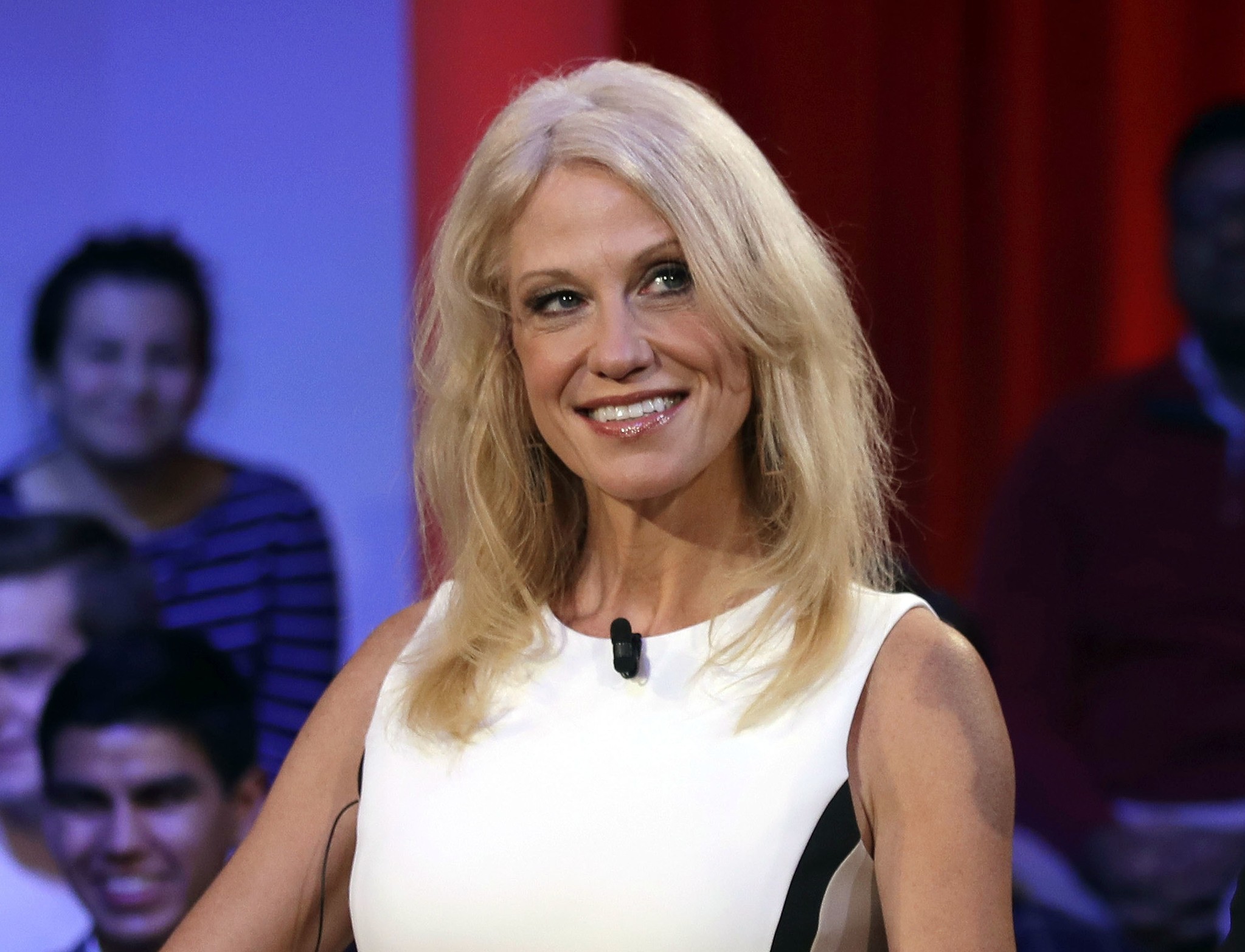 Kellyanne Conway prior to a forum at Harvard University's Kennedy School of Government in Cambridge. (AP Photo)
by Associated Press
Feb 10, 2017 12:00 am

The White House has "counseled" a top aide to President Donald Trump after she promoted Ivanka Trump's fashion line during a national cable television appearance from the White House.

The Utah Republican congressman said he will join with Democratic Oversight Leader Elijah Cummings to ask the Office of Government Ethics to review the matter. Chaffetz also said he will write a formal letter to the White House lodging his irritation.

"It needs to be dealt with," he said in an interview with The Associated Press. It's the first time during the young administration that Chaffetz has questioned an ethical matter.

Speaking later to Utah lawmakers, Chaffetz added: "Of course I'm going to call that out. My job is not to be a cheerleader for the president."

The ethics dustup began Wednesday with the president himself.

Reacting to news that a department store had dropped his daughter's line of clothing and accessories, Trump tweeted — and retweeted from the official presidential account — that Ivanka Trump had been treated "so unfairly by @Nordstrom."

Ivanka Trump does not have a specific role in the White House but moved to Washington with her husband, Jared Kushner, who is one of Trump's closest advisers. She followed her father's approach on business ties by handing over operating control of her fashion company but retaining ownership of it.

In a Thursday morning interview with Fox News from the White House briefing room, Conway urged people to "go buy Ivanka's stuff," boasting that she was giving the brand "a free commercial here."

While Trump and Vice President Mike Pence are not subject to ethical regulations and laws for federal employees, Conway, who is a counselor to the president, is. Among the rules: An employee shall not use his or her office "for the endorsement of any product, service or enterprise."

"For whatever reason, the White House staff evidently believes that they are protected from the law the same way the president and vice president are," said Stuart Gilman, a former special assistant to the director of Office of Government Ethics.

He called Conway's comments "unbelievable" and said they risk wrecking the U.S.'s reputation around the world as a model for government employee ethics.

Midday Thursday, the Office of Government Ethics sent out a series of tweets saying the office has seen an "extraordinary" response from people emailing, calling and submitting information online about "recent events."

The office advises federal employees on such issues but is not an enforcement agency; enforcement falls to Congress, the General Accounting Office, the FBI, various inspectors general and others, OGE noted on Twitter.

Ultimately, it is up to Trump to punish employees for ethics infractions.

"Conway's action reflects an ongoing careless disregard of the conflicts of interest laws and regulations by some members of the Trump family and Trump administration," said Craig Holman, government affairs lobbyist for Public Citizen. The group Citizens for Responsibility and Ethics in Washington also lodged a complaint.

Spicer said Wednesday that Trump was responding to an "attack on his daughter" when he posted the tweet and that "he has every right to stand up for his family and applaud their business activities, their success."

Ethics lawyers had a different interpretation. The implication, intended or not: Hurt my daughter's business, and the Oval Office will come after you.

"This is a shot across the bow to everybody who is doing business with Trump or his family," said Norman Eisen, who was President Barack Obama's chief ethics counselor. "It's warning them: Don't withdraw their business."

Trump's son Donald Jr. tweeted a link Thursday to a story on the Breitbart conservative news website saying that women across the country are cutting up their Nordstrom cards and planning boycotts after the decision to drop his sister's brand.

Though Trump has tweeted about companies such as Boeing, Carrier and General Motors, ethics experts say this time was different because it involved his daughter's business, raising conflict-of-interest concerns.

Ethics experts have criticized Trump's plan to separate himself from his sprawling real estate business by handing managerial control to his two adult sons. The experts want him to sell his company. Most modern presidents have sold their financial holdings and put the cash raised in a blind trust whose investments remained unknown to them.

Eisen joined with other legal scholars and lawyers to sue the president last month for allegedly violating a clause in the Constitution that prohibits government officials from accepting gifts or payments from foreign governments.

Trump and his top aides have repeatedly said that Americans do not care about what Eisen and other ethics critics say. "Prior to the election it was well known that I have interests in properties all over the world," Trump wrote on Twitter Nov. 21.

Nordstrom reiterated Wednesday that its decision to drop Ivanka Trump's brand was based on its performance, not politics. The company said sales of her items had steadily declined over the past year, particularly in the last half of 2016, "to the point where it didn't make good business sense for us to continue with the line for now."