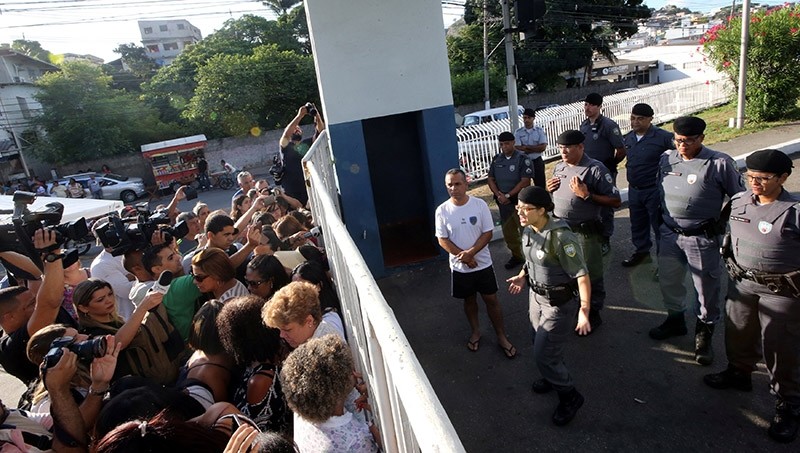 A military police officer (R) talks with relatives of police officers who are blocking the main entrance of police headquarters, during a police strike over wages, in Vitoria, Espirito Santo, Brazil February 11, 2017. (Reuters Photo)
by Feb 11, 2017 12:00 am

Relatives of police in a southeastern state of Brazil continued to blockade police stations on Saturday, despite an agreement meant to end a strike by officers that has plunged the region into chaos.

More than 120 people have been reported killed amid looting and robbery in Espirito Santo since police went on strike a week ago demanding better pay.

According to an agreement Friday night between local authorities and police representatives, a copy of which was obtained by AFP, the police were meant to return to work from 7 am Saturday (0900 GMT). In exchange, they would not face disciplinary action.

But the deadline came and went, and the situation remained unchanged.

The agreement came after authorities ran out of patience and said they were filing rebellion charges against more than 700 officers who had refused to leave their bases.

Police, who are classified as military, are barred by the constitution from going on strike or demonstrating. To get around that law, relatives of officers have blocked the entrances to all police bases in Espirito Santo.

Family members of police said Friday's agreement was not legitimate because their representatives were not present at the negotiations.

"They cannot sign an agreement between them. This is a movement led by the wives of officers and none of us were there. The movement continues," the wife of a police officer told the G1 news site.

More than 3,000 soldiers were patrolling the streets while the police remained on strike, but tension was running high. Businesses and schools have been closed all week.

On Friday, similar strikes erupted at some of Rio de Janeiro's police stations over unpaid wages, though spokesman Major Ivan Blaz told journalists that "95 percent" of officers were working as normal and that the state and city were secure.

The situation in Rio was calm Saturday morning.

Morale among street police is low as a result of nearly bankrupt Rio state's inability to pay full wages, as well as brutal crime fighting that has seen more than 3,000 officers killed in Rio since 1994 -- a casualty rate exceeding that of US troops in World War II, according to a recent study.

President Michel Temer, who said nothing in public about the crisis all week, called the situation "unacceptable" on Friday and said that demonstrators "cannot hold the Brazilian people hostage."