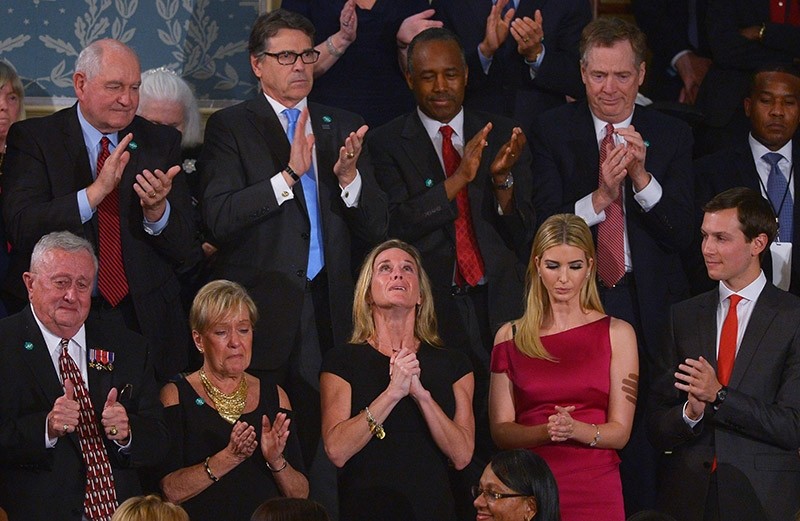 Carryn Owens, the wife of slain Navy SEAL William u2018Ryanu2019 Owens, looks up while being acknowledged by US President Donald Trump during his address to a joint session of Congress at the US Capitol in Washington, DC on Feb. 28, 2017. (AFP Photo)
by Compiled from Wire Services Mar 01, 2017 12:00 am

U.S. President Donald Trump has honored Chief Special Warrant Officer William "Ryan" Owens, who was killed in a raid in Yemen during his first days in office, during his address to the Congress on Tuesday night, while Owens' widow, Carryn, sat in the guest box.

Carryn Owens was seated next to Trump's daughter Ivanka in the House of Representatives visitors gallery during Trump's address to the Congress.

"Ryan died as he lived: a warrior, and a hero - battling against terrorism and securing our nation," Trump told hundreds of lawmakers and millions of Americans watching the prime time TV broadcast.

Throughout the House chamber, people rose in unity to give a standing ovation to Owens, who appeared nearly overcome by the gesture. Ivanka Trump offered quiet comfort at her side.

The commander-in-chief explained that the operation was described to him by Secretary of Defense Jim Mattis as "a highly successful raid that generated large amounts of vital intelligence."

The remark could revive the controversy over the raid. Its heavy toll of Yemeni civilians killed, including children, has come into question.

The White House had insinuated that criticizing the operation was tantamount to dishonoring Owens, the first American killed in combat under the Trump administration.

But the Navy SEAL's father, William Owens, described the mission as "stupid" in a recent interview, and refused to meet with the US president when Trump traveled to a Delaware military base on February 1 to pay his respects as Ryan Owens' body was returned to the United States.

"Ryan's legacy is etched into eternity," Trump said in his speech, prompting a longer, 90-second ovation as Carryn Owens repeatedly looked up to the House ceiling, her hands clasped.

"And Ryan is looking down right now," Trump added, calling him a "hero" who laid down his life for US freedoms.