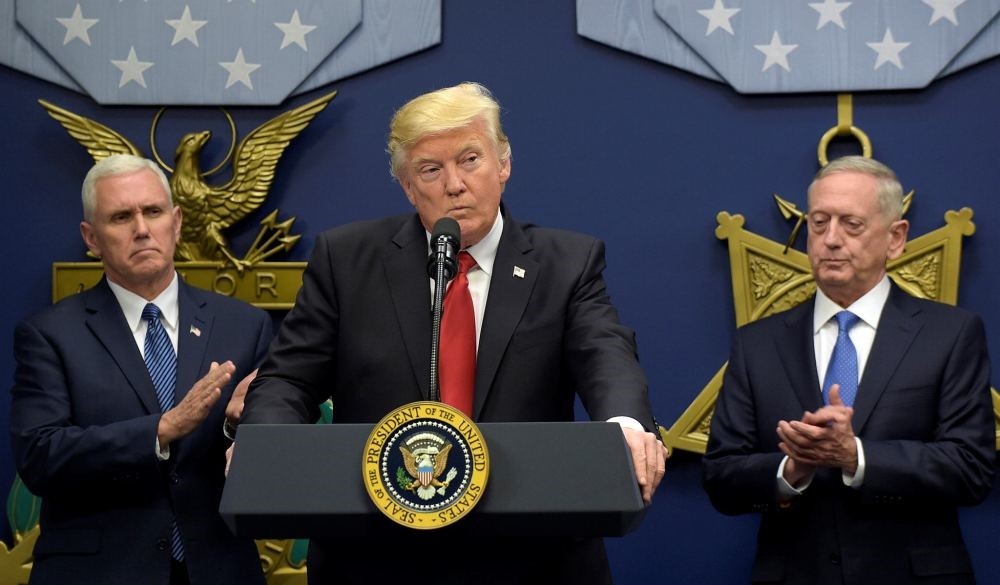 U.S. President Donald Trump flanked by Vice President Mike Pence (L) and Defense Secretary James Mattis (R) as he speaks during an event at the Pentagon in Washington.
by Compiled from Wire Services Mar 01, 2017 12:00 am

U.S. President Donald Trump offered a taste of his upcoming budget, announcing he would ask Congress for a nearly 10 percent rise in defense spending, the biggest increase since the Iraq war, and a large cut in foreign aid

President Donald Trump is proposing a huge $54 billion surge in U.S. military spending for new aircraft, ships and fighters in his first federal budget while slashing big chunks from domestic programs and foreign aid to make the government "do more with less." The proposed rise in the Pentagon budget to $603 billion comes as the United States has wound down major wars in Iraq and Afghanistan and remains the world's strongest military power.

The Trump blueprint, due in more detail next month, would fulfill the Republican president's campaign pledge to boost Pentagon spending while targeting the budgets of other federal agencies. The "topline" figures emerged Monday, one day before Trump's first address to a joint session of Congress, an opportunity to re-emphasize the economic issues that were a centerpiece of his White House run.

Domestic programs and foreign aid would as a whole absorb a 10 percent, $54 billion cut from currently projected levels — cuts that would match the military increase. The cuts would be felt far more deeply by programs and agencies targeted by Trump and his fellow Republicans, like the Environmental Protection Agency as well as foreign aid. Veterans' programs would be exempted, as would border security, additional law enforcement functions and some other areas.

"We're going to start spending on infrastructure big. It's not like we have a choice — our highways, our bridges are unsafe, our tunnels," the president told a group of governors at the White House on Monday. He added, "We're going to do more with less and make the government lean and accountable to the people."

More than 120 retired U.S. generals and admirals urged Congress on Monday to fully fund U.S. diplomacy and foreign aid, saying such programs "are critical to keeping America safe." Trump has vowed to spare middle-class social programs such as Social Security and Medicare from any cuts. Nancy Pelosi, the top Democrat in the House of Representatives, said Trump's plan to slash funding for federal agencies to free up money for the Pentagon showed he was not putting American working families first.

"A $54 billion cut will do far-reaching and long-lasting damage to our ability to meet the needs of the American people and win the jobs of the future," Pelosi said. "The president is surrendering America's leadership in innovation, education, science and clean energy."

Meanwhile, the Republican chairman of the House of Representatives Armed Services Committee called President Trump's reported $603 billion defense budget request low. "Over the course of the Obama Administration, our military funding was cut 20 percent while the world grew more dangerous. While we cannot repair all of the damage done by those cuts in a single year, we can and should do more than this level of funding will allow," Representative Mac Thornberry said in a statement. "The administration will have to make clear which problems facing our military they are choosing not to fix," he said.

An official familiar with the proposal said Trump's request for the Pentagon included more money for shipbuilding, military aircraft and establishing "a more robust presence in key international waterways and choke points" such as the Strait of Hormuz and South China Sea.

That could put Washington at odds with Iran and China. The United States already has the world's most powerful fighting force and it spends far more than any other country on defense. About one-sixth of the federal budget goes to military spending.