Trump claims Obama wiretapped him in Trump Tower prior to election 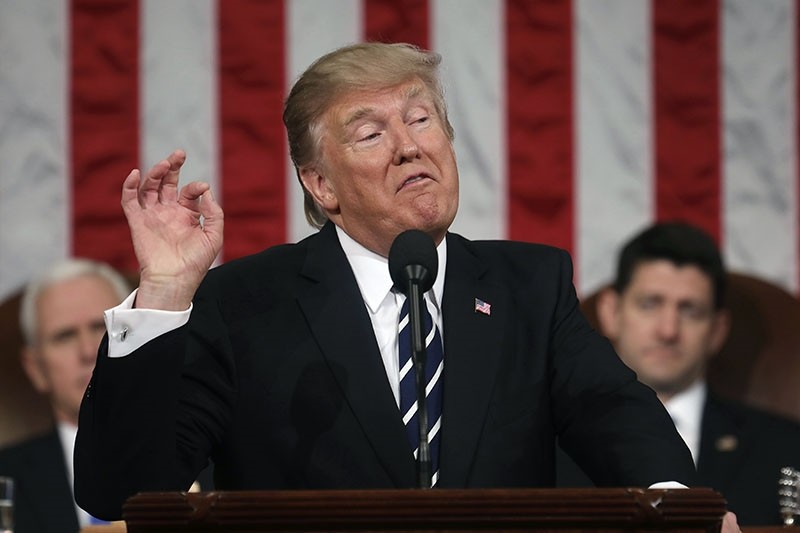 President Donald Trump addresses a joint session of Congress on Capitol Hill in Washington. (AP Photo)
by Daily Sabah with DPA Mar 04, 2017 12:00 am

In a series of early morning tweets on Saturday, President Donald Trump accused his predecessor Barack Obama of wiretapping his New York office during the election campaign, but did not reveal the source of his information.

"Terrible! Just found out that Obama had my 'wires tapped' in Trump Tower just before the victory. Nothing found. This is McCarthyism!" he wrote at 6:35 am (1135 GMT).

Terrible! Just found out that Obama had my "wires tapped" in Trump Tower just before the victory. Nothing found. This is McCarthyism!

Within minutes it was followed by three more Twitter posts in which Trump asserted without evidence that Obama had his phone calls intercepted and monitored.

"How low has President Obama gone to tapp [sic] my phones during the very sacred election process. This is Nixon/Watergate. Bad (or sick)guy!"

Is it legal for a sitting President to be "wire tapping" a race for president prior to an election? Turned down by court earlier. A NEW LOW!

I'd bet a good lawyer could make a great case out of the fact that President Obama was tapping my phones in October, just prior to Election!

The tweets come as the new administration once again faces questions over the Trump campaign team's contacts with Russia prior to his inauguration.

Trump's first address to Congress this week was quickly overshadowed by the revelation that Attorney General Jeff Sessions - one of Trump's earliest supporters in Congress - had met twice with the Russian ambassador.

Sessions never disclosed the encounters during his Senate confirmation hearings, despite direct questions on the subject.

The president used his Twitter tirade to defend Sessions, saying that one of the meetings was arranged by an educational programme run by the State Department.

Trump is spending the weekend at his Mar-A-Lago estate in Palm Beach, Florida. It is the fourth time he has visited the resort since he was inaugurated in January.