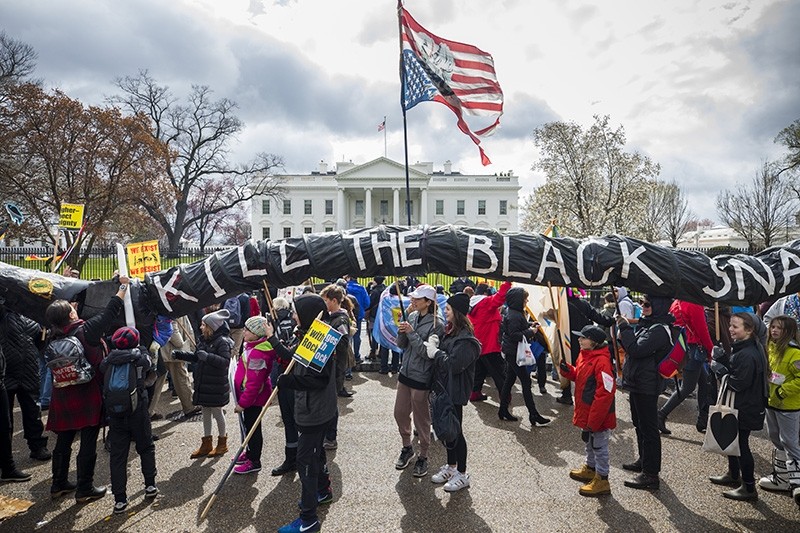 Native American groups staged a march to the White House Friday against the construction of a controversial oil pipeline which they fear could lead to the desecration of tribal lands.

Chanting "water is life," and shouting out tribal calls, a circle of dancers beat on drums during the protest joined by as many as 600 people opposed to the Dakota Access Pipeline, part of which runs through lands inhabited by the indigenous groups.

Demonstrators of all ages marched through the capital before gathering outside the White House, many wearing traditional dress and feathered headdresses and draped in colorful printed blankets.

"The government is violating our public right to clean water," Sarah Jumping Eagle, 44, a member of the Oglala Lakota tribe, told AFP.

A physician, Jumping Eagle arrived in Washington late Thursday after making the long trek from North Dakota with several other demonstrators, to show her concern over the potential for oil spills and contamination from the nearly-completed construction project.

"We know that we have to protect the water for future generations," she said.

"They are supposed to represent us and not corporations."

In the first week of his presidency, Donald Trump signed executive orders to revive the Dakota Access project, along with a second pipeline put on hold by the Obama administration, Keystone XL.

Native Americans and their supporters camped out for nearly a year at the North Dakota pipeline route, physically blocking construction at the site.

Many who had camped throughout the winter finally ended their protest last month, after authorities gave them an ultimatum to quit the site.

The Standing Rock Sioux tribe and their backers say the pipeline threatens the Missouri River and the Lake Oahe reservoir, a key drinking water source.

They also worry about the impact on nearby sacred lands.

The Dakota pipeline, which will transport more than 500,000 barrels of crude oil each day, is expected to become operational later this month, according to Energy Transfer Partners, the company handling the construction.