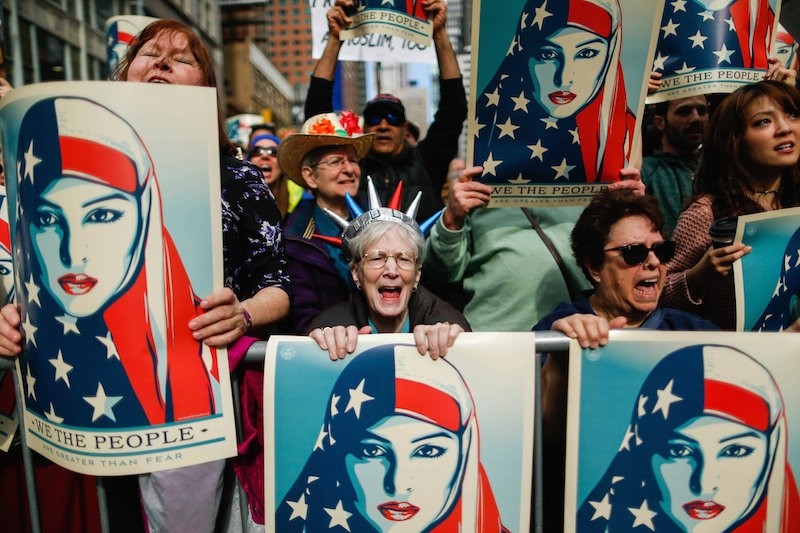 Legal challenges mount as US President Donald Trump signed a revised ban on refugees and on travelers from six Muslim-majority nations, scaling back the order to exempt Iraqis and permanent US residents. (AFP Photo)
by Associated Press Mar 10, 2017 12:00 am

Several U.S. states have said they will challenge President Donald Trump's revised travel ban that bars entrance to the country for citizens from six Muslim-majority countries.

Washington was the first state to sue over the original ban, which resulted in Judge James Robart in Seattle halting its implementation around the country. Ferguson said the state would ask Robart to rule that his temporary restraining order against the first ban applies to Trump's revised action.

"My message to President Trump is — not so fast," Ferguson told reporters. "After spending more than a month to fix a broken order that he rushed out the door, the president's new order reinstates several of the same provisions and has the same illegal motivations as the original."

Unlike the initial order, the new one says current visa holders won't be affected, and removes language that would give priority to religious minorities.

Hawaii Attorney General Douglas Chin said that the state could not stay silent on Trump's travel ban because of Hawaii's unique culture and history. Hawaii depends heavily on tourism, and the revised ban would hurt the state's economy, he said.

The courts need to hear "that there's a state where ethnic diversity is the norm, where people are welcomed with aloha and respect," Chin said.

He noted that the new travel ban order comes just after the 75th anniversary of the Feb. 19, 1942, executive order by President Franklin Roosevelt that sent Japanese-Americans to internment camps during World War II. That order was put in place after the Japanese attack on Pearl Harbor. Hawaii had an internment camp.

Ferguson said it's not the government, but the court that gets to decide whether the revised order is different enough that it would not be covered by previous temporary restraining order.

"It cannot be a game of whack-a-mole for the court," he said.

"We feel very confident with how that was crafted and the input that was given," Spicer said.

Ferguson said he was pleased that attorneys general from New York and Oregon had sought to take part in the legal action.

"We have a strong case and they are willing to join our efforts," he said of his fellow Democrats. New York Attorney General Eric Schneiderman in a statement called the executive order "a Muslim ban by another name."

In his initial lawsuit Ferguson said the original ban was unconstitutional and hurt the state's businesses and universities.

The Trump administration says the old order will be revoked once the new one goes into effect March 16.

In filing a lawsuit Wednesday night, Hawaii said the revised order would harm its Muslim population, tourism and foreign students.

Attorneys for Hawaii filed the lawsuit against the U.S. government in federal court in Honolulu. The state had previously sued over Trump's initial travel ban, but that lawsuit was put on hold while other cases played out across the country.

Hawaii's complaint says it is suing to protect its residents, businesses and schools, as well as its "sovereignty against illegal actions of President Donald J. Trump and the federal government."

Imam Ismail Elshikh of the Muslim Association of Hawaii is a plaintiff in the state's challenge. The ban will prevent his Syrian mother-in-law from visiting him, he said.

Elshikh is a U.S. citizen, has rights and would be prevented from seeing his mother-in-law, Chin said. The mother-in-law is awaiting approval of a visa to see her relatives in Hawaii.

The woman and others have become victims because of the ban's "standardless set of waivers and exceptions that weren't set by Congress," Chin said.

Hawaii's lawsuit challenging the travel ban focuses on damage to the state's economy and mainly tourism. Chin says the tourism angle is unique because the state relies heavily on visitors and Hawaii officials have a right to defend the economy.

He said people may fear traveling even within Hawaii because they would be forced to encounter a federal agent every time they get on a plane to visit a neighboring island.