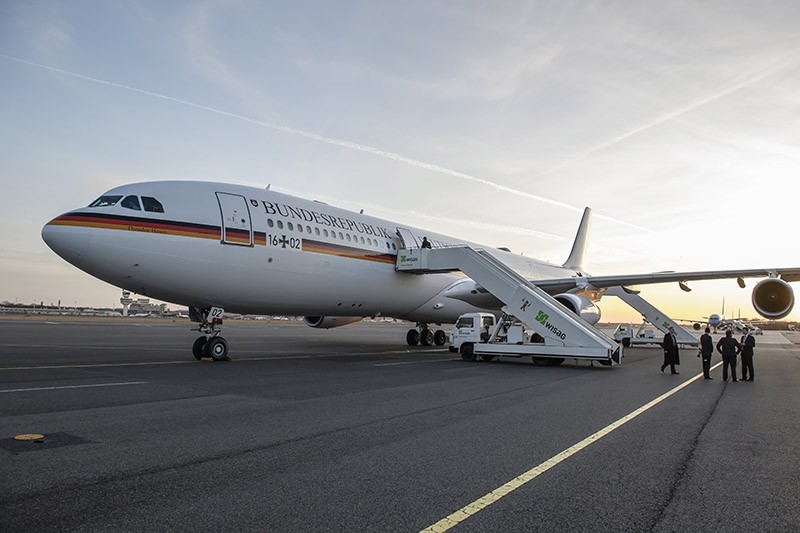 Journalists board the German Air Force plane Airbus A340 'Theodor Heuss' on the military part of Tegel Airport prior to the take off of German Chancellor Angela Merkel in Berlin, Germany, 16 March 2017. (EPA Photo)
by Compiled from Wire Services Mar 17, 2017 12:00 am

President Donald Trump welcomes German Chancellor Angela Merkel on Friday for a White House meeting that could help determine the future of the transatlantic alliance and shape the working relationship between two of the world's most powerful leaders.

The new U.S. president and the long-serving stateswoman, whose country is Europe's largest economy, will discuss funding for NATO and relations with Russia in their first meeting since Trump took office in January.

The meeting is consequential for both sides.

Merkel, who officials say has prepared carefully for the encounter, is likely to press Trump for assurances of support for a strong European Union and a commitment to fight climate change.

Trump, who as a presidential candidate criticized Merkel for allowing hundreds of thousands of refugees into Germany, will seek her support for his demand that North Atlantic Treaty Organization nations pay more for their defense needs.

Relationship building will be a less overt but important agenda item. Merkel had close relations with Trump's Democratic and Republican predecessors, Barack Obama and George W. Bush, and she is likely to seek a strong working relationship with Trump despite major policy differences and wariness in Germany about the former New York businessman.

"Those who know the chancellor know that she has a knack for winning over people in personal discussions. I am sure that Donald Trump will not be immune," said Juergen Hardt, a conservative lawmaker who helps coordinate transatlantic relations for the German government.

Trump is eager to see follow-through on his demand that European countries shoulder more of the burden of paying for the NATO alliance, which he has criticized.

He will also seek counsel from Merkel on how to deal with Russian President Vladimir Putin, a leader Merkel has dealt with extensively and whom Trump, to the consternation of Republican and Democratic lawmakers, has praised.

"The president will be very interested in hearing the chancellor's views on her experience interacting with Putin," a senior administration official told reporters.

A U.S. official said the Trump administration's position on U.S. participation in the Paris agreement to curb climate change would likely come up in the Merkel meeting and be further clarified in the weeks and months ahead. Merkel is a strong supporter of international efforts to fight global warming.

Trump has called climate change a hoax and vowed during his campaign to "cancel" the Paris agreement within 100 days, saying it would be too costly for the U.S. economy.

Since being elected, he has been mostly quiet on the issue. In a New York Times interview in November, he said he would keep an open mind about the Paris deal.

Merkel is also likely to press Trump about U.S. support for European security, despite assurances from Vice President Mike Pence about that issue on his recent trip to Europe.

"There is still lingering doubt about ... how the U.S. sees European security, and whether the U.S. sees its security and Europe's security as intrinsically linked and inseparable," Jeffrey Rathke, a senior fellow at the Center for Strategic & International Studies, told reporters.

Between meetings the pair will hold a joint press conference that is sure to dredge up past barbed disagreements.

"Germany looks toward Washington with a mixture of vulnerability and confidence," said Jeffrey Rathke.

"Germany is the de facto leader of the European Union, but the Union is undergoing internal and external trials that make its future uncertain," he added.

"And Germany has placed all of its security eggs in multilateral baskets."

Merkel is sure to raise the issue of a proposed US border tariff that would hit German manufacturers hard. To underscore the point she will bring a host of German business leaders along for the trip.

Before departing for the United States, Merkel also noted she will be going to Washington as an envoy of Germany, but also Europe.

"I will of course point out that for us, our country and our membership in the European Union are two sides of the same coin," Merkel said ahead of the visit.