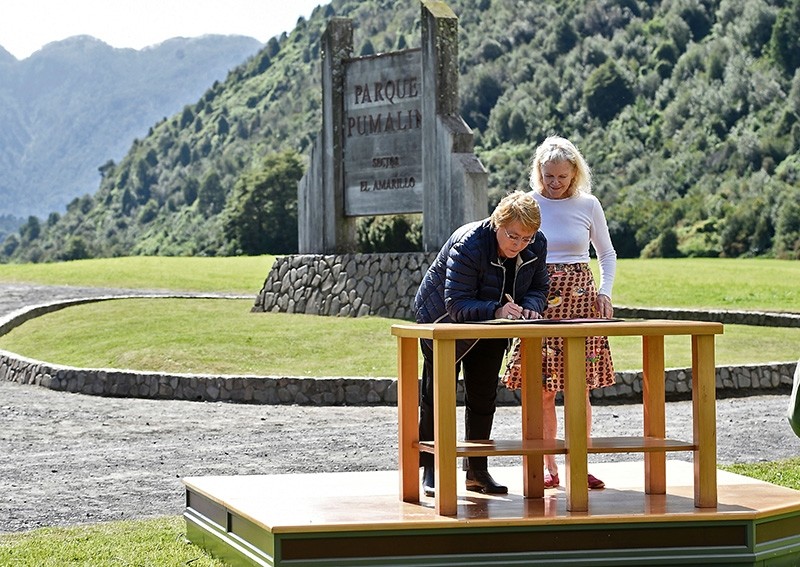 This handout photo released by the Chilean presidency shows President Michelle Bachelet (L) signing a document to receive a donation of 407,000 hectares of land from Kristine McDivitt at Parque Pumalin in southern Chile on March 15, 2017. (AFP Photo)
by Daily Sabah Mar 18, 2017 12:00 am

U.S. philanthropist Douglas Tompkins's widow vividly remembers the suspicions the late billionaire raised when he started buying up land in Patagonia, the natural paradise at the bottom of South America.

Some accused him of preparing a storage site for American nuclear waste, she says. Others said he was starting a cult, still others that he wanted to launch a Jewish state -- even though he was raised Episcopalian.

Now, just over one year after his death, she hopes her late husband's final wishes for the land will lay the controversy to rest for good.

Tompkins, the co-founder of The North Face outdoor label and clothing brand Esprit, has donated a tract of land the size of Rhode Island to the Chilean government as a national park -- the largest such donation in history.

This week, Chilean President Michelle Bachelet accepted the 407,000-hectare (one million-acre) donation in a ceremony held in a verdant Patagonian meadow and attended by Tompkins's widow, Kristine McDivitt, a former CEO of the outdoor clothing and gear company Patagonia.

Chilean President Michelle Bachelet formally accepted the land in a ceremony on Wednesday in the town of Chaiten, some 1,260 kilometers (780 miles) south of Santiago. A presidential decree is still needed to complete the transaction.

At the event, McDivitt said she hoped the donation "will serve as a model for other countries."

Bachelet's government also agreed to protect an additional 949,368 hectares, resulting in 4.5 million hectares of new parkland in eight regions of the country.

The ceremony came a year and three months after Tompkins's death at age 72 in a kayaking accident in the Patagonia region he adored.

"Douglas Tompkins's generosity and love of nature" shine through in his gift, Bachelet said on accepting the land on behalf of the Chilean state.

"If there were still any suspicions, with this gigantic donation they have been definitively left in the past," said Chilean journalist Andres Azocar, who has written a biography of Tompkins called "The Green Billionaire."

Much has changed in the quarter-century since Tompkins moved to Chile and started buying up huge swathes of land here and in neighboring Argentina.

The American magnate stoked controversy with his outsized ambition and ability to use his massive fortune to gobble up privately owned land in the remote southern region.

His plans to turn the land into national parks made him some powerful enemies in a Chile just emerging from the bloody 17-year dictatorship of Augusto Pinochet.

It was a time when the country was deeply suspicious of outsiders, especially from the United States, which had backed Pinochet's coup.

And while the animosity faded over the years -- the parks Tompkins created are today broadly hailed as an environmental and tourism boon in both Chile and Argentina -- some still harbor lingering bitterness toward the late conservationist.

"I don't see the benefit of this deal for the state."

Tompkins launched North Face as a mountaineering store in San Francisco in 1966.

Tompkins sold his stake in The North Face in the late 1960s and in Esprit in the 1980s.

The rugged, white-haired adventurer moved to Chile in 1990.

The controversy around him also extended to Argentina, where some accused him of buying up freshwater supplies for a future business venture.

"They're accusing me of all kinds of things," he told Argentine newspaper La Nacion in 2013.

"I've already developed psychological armor against it. Sometimes it's tragicomic. You have to have a good sense of humor and the skin of a hog: hard and leathery."