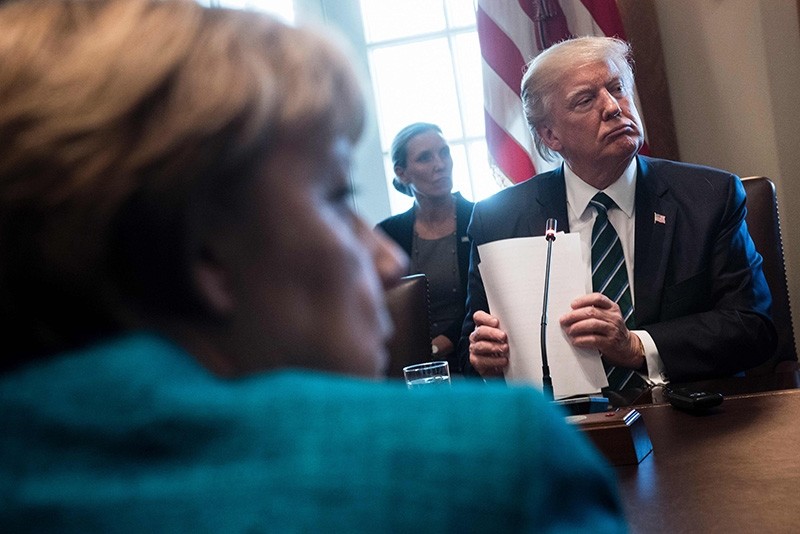 Germany's Chancellor Angela Merkel (L) and US President Donald Trump listen as participants introduce themselves before a meeting in the Cabinet Room of the White House, March 17, 2017 in Washington, D.C. (AFP Photo)
by Compiled from Wire Services Mar 18, 2017 12:00 am

President Donald Trump says Germany owes "vast sums of money" to NATO and the U.S. "must be paid more" for providing defense.

In a tweet from his Florida resort, where he is spending the weekend, Trump wrote that he had a "GREAT" meeting with German Chancellor Angela Merkel, despite reports to the contrary.

But he reiterated his stance that Germany needs to meet its end of the bargain if it is to continue benefiting from the military alliance.

Trump wrote, "Despite what you have heard from the FAKE NEWS, I had a GREAT meeting with German Chancellor Angela Merkel."

He added, "Nevertheless, Germany owes ... vast sums of money to NATO & the United States must be paid more for the powerful, and very expensive, defense it provides to Germany!"

In a joint press conference with Merkel, Trump had said it was "very unfair to the United States" for European allies to take advantage of US defense spending.

"These nations must pay what they owe," he said Friday.

Trump had also thanked Merkel for Germany's commitment of increasing its NATO contributions to two percent of gross domestic product.

"There is no debt account at NATO," von der Leyen said in a statement, adding that it was wrong to link the alliance's target for members to spend 2 percent of their economic output on defense by 2024 solely to NATO.

"Defense spending also goes into U.N. peacekeeping missions, into our European missions and into our contribution to the fight against IS terrorism [Daesh]," von der Leyen said.

She said everyone wanted the burden to be shared fairly and for that to happen it was necessary to have a "modern security concept" that included a modern NATO but also a European defense union and investment in the United Nations.

German defense spending is set to rise by 1.4 billion euros to 38.5 billion euros in 2018 - a figure that is projected to represent 1.26 percent of the economic output, Finance Minister Wolfgang Schäuble has said.

During her trip to Washington, Merkel reiterated Germany's commitment to the 2 percent military spending goal.

During the 2016 election campaign, then-candidate Trump had said on his foreign policy speech that U.S. NATO allies "are not paying their fair share […] we have spent trillions of dollars, of time, on planes, missiles, ships, equipment, building up our military to provide a strong defense for Europe and Asia."

"The countries we are defending must pay for the cost of this defense and if not the U.S. must be prepared to let these countries defend themselves."

The president has questioned why the U.S. spends billions for the defense of countries like Saudi Arabia and Japan when they are perfectly capable of defending themselves.

"Our allies must contribute toward the financial, political and human costs of our tremendous security burden. But many of them are simply not doing so. They look at the United States as weak and forgiving and feel no obligation to honor their agreements with us.

In NATO, for instance, only 4 of 28 other member countries, besides America, are spending the minimum required 2 percent of GDP on defense."

At the White House, Merkel said she and Trump discussed Berlin's contributions to NATO and the continuing German military participation in Afghanistan.

The right-wing populist Trump has set a pattern of firing off inflammatory messages on Twitter, particularly on weekends, since taking office January 20.