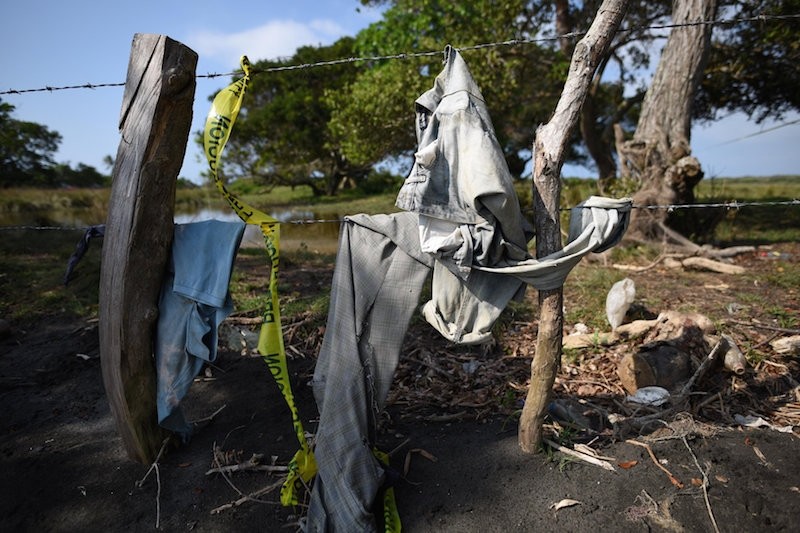 Clothing is pictured on a wire fence at site of unmarked graves where a forensic team and judicial authorities are working in after human skulls were found, in Alvarado, in Veracruz state, Mexico. (Reuters Photo)
by Mar 20, 2017 12:00 am

Investigators have uncovered 47 skulls of victims from Mexico's drug war in a mass grave, Veracruz attorney general said Sunday. The discovery comes just days after 250 skulls were unearthed at a separate mass grave in the state.

Veracruz, on Mexico's Gulf coast, has long been a stomping ground for criminal gangs, who fight over lucrative drug and migrant smuggling routes.

Giving details on the latest grisly find, Jorge Winckler said the skulls and remains of multiple body parts were unearthed from eight unmarked graves, clustered in a 120 sq metre area, about 10 kilometers (6 miles) from the town of Alvarado.

So far, Winckler said, investigators had positively identified one three-person family, missing since September 2016, and the remains of two other men.

"The work continues," Winckler told a news conference, vowing to track down the perpetrators.

The relatives' groups have exposed the government's slow progress in attending to rights abuses and victims.

The former governor of Veracruz, Javier Duarte, who belonged to the country's ruling party, is a fugitive, fleeing organized crime charges.

Separately, on Sunday the Veracruz attorney general's office said it was investigating the murder of a journalist, Ricardo Monlui, who was shot dead in the town of Yanga.

Veracruz is the most dangerous state in Mexico for journalists. The Committee to Protect Journalists said in 2016 that at least six reporters had been killed for their work since 2010, when Duarte took office, adding it was investigating nine other cases.