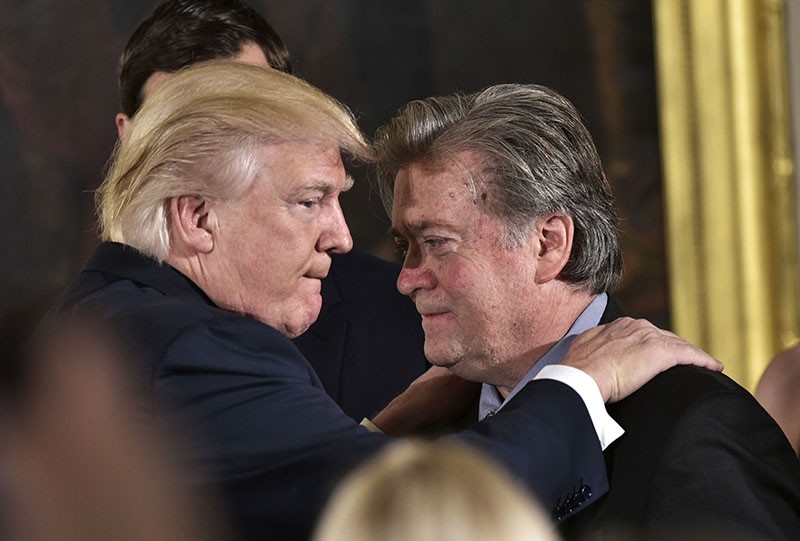 This Jan. 22, 2017 photo shows US President Donald Trump (L) congratulating Senior Counselor to the President Stephen Bannon during the swearing-in of senior staff in the East Room of the White House on January 22, 2017 in Washington, DC. (AFP Photo)
by Angelos Berberakis Apr 06, 2017 12:00 am

The widely perceived "demotion" of Steve Bannon is actually the "logical evolution" of the Trump administration. Despite initial reports that Bannon was "ousted" from the National Security Council (NSC), comments made by the man himself as well as surrounding staff and factual changes within the NSC operational staff suggest otherwise.

In an preview interview for the Fox News Channel's "First 100 Days," U.S. Vice President Mike Pence stated: "I think [that] with H.R. McMaster's addition as our national security advisor, a man of extraordinary background in the military, this is just a natural evolution, to ensure the [NSC] is organized in a way that best serves the president in resolving and making those difficult decisions."

A White House official has said that one of the reasons Bannon was placed in the NSC was to "babysit" former National Security Advisor Michael Flynn, who was forced to resign after misleading Vice President Pence regarding his conversations with Russian Ambassador Sergey Kislyak.

Bannon was even accused by some media outlets of blocking H.R. McMaster, and the extent of his actual involvement in the NSC remains disputed. White House sources say that he rarely even attended any principals meetings, while others say he had not attended any because he was appointed there to reform the council, not run counter to McMaster or anyone else.

"It really reflects well on H.R. McMaster, who has orchestrated all the key moves behind the scenes prior to announcing them and has gotten their approval," said David Rothkopf, author of two books on the history of the NSC, who spoke during an interview. "That is a sign of a smart, effective bureaucrat and leader. This restores the traditional structures to the NSC. It is putting in place a professional team of national security advisors, while giving McMaster more authority and restoring the roles of the military and intelligence leadership."

Bannon has completed one of his assigned tasks since he's now leaving the NSC, but he continues to have top security clearance and remains one of the president's top senior advisors, despite being faced with resistance from Trump's own son-in-law and fellow advisor to the president, Jared Kushner.

According to reports from political news organization Politico, Kushner, a former New York Democrat, has been voicing his opposing stance against Bannon, who is a fervent anti-globalist.

Furthermore, Republican strategist Roger Stone, who served as an advisor to the 2016 Trump campaign, has claimed that Kushner is "leaking" stories about Bannon to MSNBC's Joe Scarborough.

In an interview with InfoWars' Alex Jones, Stone claimed that "Jared Kushner, perhaps the one presidential aide who cannot be fired, is now in regular text message communications with Joe Scarborough. Many of the anti-Steve Bannon stories that you see, the themes that you see on Morning Joe [hosted by Scarborough], are being dictated by Kushner; and while Mr. Kushner's plate is very full with Middle Eastern peace and the China visit and so on, in this case, I think he is disserving the president."

Stone attributed his claims to internal White House sources, saying: "There is no question now that sources tell me that the president's son-in-law enjoys a very lively text exchange with Joe Scarborough," Stone said, noting: "Joe Scarborough is no friend of the president; he revels in passing along fake news. He himself has more scandals than you can shake a stick at."

Regardless, Bannon did what he was assigned to do and will now move on to other duties.