Era of strategic patience over, US VP warns North Korea 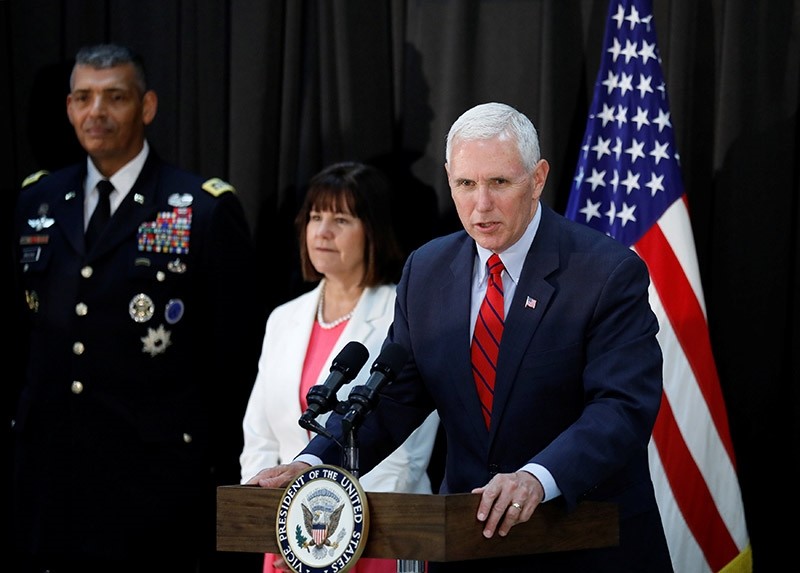 U.S. Vice President Mike Pence speaks during an Easter fellowship dinner at a military base in Seoul, South Korea (Reuters Photo)
by Compiled from Wire Services Apr 17, 2017 12:00 am

U.S. Vice President Mike Pence said "the era of strategic patience is over," while also saying the U.S. seeks security "through peaceable means," as he visited the demilitarized zone (DMZ) on the border between North and South Korea on Monday.

Pence's trip to the flashpoint frontier underscored Washington's shifting policy towards the isolated state after years of nuclear and missile tests carried out in defiance of the international community.

The visit comes after a huge military parade during which North Korea showcased apparent intercontinental ballistic missiles, and as a U.S. carrier group converges on the Korean peninsula, ratcheting up tensions to their highest point in years.

Washington wants to achieve security "through peaceable means, through negotiations. But all options are on the table as we continue to stand shoulder to shoulder with the people of South Korea," Pence said at the village of Panmunjom inside the Demilitarized Zone.

Pence, speaking at Freedom House, a few metres from the military demarcation line that he described as a "frontier of freedom", said America's relationship with South Korea was "ironclad and immutable".

"The message of the people of the United States of America is that we seek peace, but America has always sought peace through strength and my message here today standing with U.S. forces Korea, standing with courageous soldiers from the Republic of Korea is a message of resolve.

"The people of North Korea, the military of North Korea should not mistake the resolve of the United States of America to stand with our allies."

He also said "the era of strategic patience is over" and expressed hopes that China would "do more" to help solve the problem.

Tensions between Pyongyang and Washington have soared in recent weeks, as a series of North Korean weapons tests have wrought ever-more bellicose warnings from Donald Trump's administration.

The new and U.S. president has indicated he will not allow North Korea to develop an intercontinental ballistic missile capable of delivering a nuclear warhead to the western United States.

Pyongyang insists it needs a powerful arsenal -- including atomic weapons -- to protect itself from what it says is the ever-present threat of invasion by hostile U.S. forces.

A top White House foreign policy adviser on Sunday became the latest Trump official to warn that while diplomatic pressure was preferable, US military action is very much on the table.

"We have a wide array of tools at disposal for the president should he choose to use them," the official said.

Speaking on Sunday before a handful of the 28,500 US military personnel stationed in South Korea, Pence denounced the latest North Korea test as a "provocation".

The latest launch -- which failed when the missile blew up seconds after blast off -- came a day after the North held a defiant massive military parade in Pyongyang showcasing nearly 60 missiles -- including a suspected new intercontinental ballistic missile.

The North has a habit of test-firing missiles to mark major dates such as Saturday's 105th anniversary of the birth of the nation's founder Kim Il-Sung, or as gestures of defiance when top U.S. officials visit the region.

South Korea's foreign ministry said that by conducting the latest test just a day after displaying a series of missiles, "North Korea has threatened the whole world".

After visiting the DMZ, Pence is expected to hold talks with South Korea's Acting President Hwang Kyo-Ahn in Seoul.

Pence will try to steer clear of South Korea's tumultuous domestic politics ahead of elections next month.

But he will no doubt address worries in Washington that any new government may slow-walk the deployment of THAAD -- a system designed to shoot down missiles from North Korea or elsewhere.

This is Pence's first visit to South Korea -- part of an Asia swing that also includes stops in Japan, Indonesia and Australia -- and although it was conceived months ago, could hardly come at a time of higher tension.

U.S. Vice President Mike Pence said "the era of strategic patience is over," while also saying the U.S. seeks security "through peaceable means," as he visited the demilitarized zone (DMZ) on the border between North and South Korea on Monday.

"The people of North Korea, the military of North Korea, should not mistake the resolve of the United States of America to stand with our allies," Pence said, amid growing concerns about Pyongyang's nuclear and missile programmes.

Speaking in the DMZ, Pence said the US seeks peace but reiterated that "all options are on the table" as the country works with South Korea on the denuclearisation of the Korean Peninsula.

"The alliance between South Korea and the United States is ironclad," Pence said.

He said he was hopeful China would help solve the current heightened tensions in the region, saying, "we look for them to do more."