12 people killed overnight during looting and violence in Venezuela 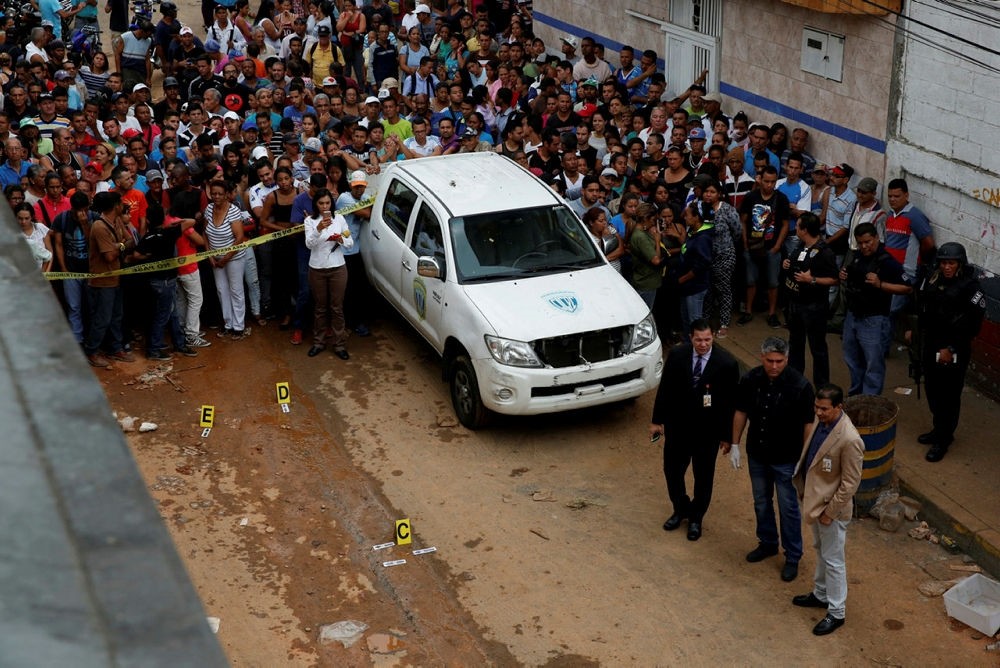 At least 12 people were killed overnight during looting and violence in Venezuela's capital amid a spiraling political crisis, authorities said Friday.

Most of the deaths took place in El Valle, a working class neighborhood near Caracas' biggest military base where opposition leaders say a group of people were hit with an electrical current while trying to steal a refrigerator from a bakery.

Two days of huge protests on the streets of Caracas against the socialist government of President Nicolas Maduro spilled into a violent Thursday night in several parts of the city, with residents in El Valle witnessing repetitive gunfire, street barricades set aflame and more than two dozen businesses looted. Amid the confusion, mothers and newborn children had to be evacuated from a maternity hospital named after the late leader Hugo Chavez when it was swamped with tear gas.

The Public Ministry said the violence left 11 people dead in El Valle, all men between the ages of 17 and 45. Another death was reported east of Caracas in El Sucre. Six other people were injured.

"This was a war," said Liliana Altuna, whose butcher shop was ransacked by looters armed with guns who grabbed everything in sight.

Opposition leaders accused the government of repressing protesters with tear gas and rubber bullets but standing idly by as businesses were looted. Meanwhile, Foreign Minister Delcy Rodriguez pointed the finger at the opposition, saying armed groups controlled by the government's foes were responsible for the attack at the hospital.

"We reject and do not accept those irresponsible declarations," said Henrique Capriles, a former opposition candidate for president who the government recently barred from running for public office.

Overall, at least 20 people have been killed in the unrest that erupted after the government-stacked Supreme Court gutted congress of its last vestiges of power three weeks ago — a move later reversed amid a storm of international criticism. Angry protesters are demanding new elections and denouncing a government they deem a dictatorship responsible for triple-digit inflation, soaring crime and widespread shortages of food and medical supplies.

The violence began Thursday night and stretched into Friday in El Valle, an area historically known as a hot spot for political protest. Witnesses said masked looters wielding knives and guns descended on an area known as "the little market" filled with bakeries, supermarkets and butcher's shops.

"They left us with nothing," said Manuel Martinez, who was directing cleanup and repairs at a destroyed grocery store.

"What they did wasn't because of hunger," he added. "It's vandalism."

The chaos turned deadly when looters entered a bakery protected by an electric fence and tried to remove a refrigerator. The accounts varied, but one opposition leader said 13 people were hit with an electrical current after tossing containers filled with water and making contact with the refrigerator's power cord.

Earlier Friday, officials reported that one of the dead was Mervins Guitian. The young Venezuelan man was fatally shot when he was returning home late from work Thursday and got caught in the middle of late-night street clashes. Vicente Paez, a local councilman, said Guitian was an employee of a Caracas-area city governed by an opposition mayor but didn't join the protests. It wasn't clear who shot him and there was no immediate comment from authorities.

Venezuelan social media was ablaze late into the night with grainy cellphone videos of light-armored vehicles plowing down dark streets to control pockets of protesters who set up burning barricades in several neighborhoods.

Vice President Tareck El Aissami said Friday the country is facing an "unconventional war" led by opposition groups working in concert with criminal gangs. He said opposition claims government forces were responsible for launching tear gas at the maternity hospital were another attempt to demoralize a people who have "decided to break ties with the bourgeoisie forever."

Opposition members said they have no intention of easing up on protests.

"Twenty days of resistance and we feel newly born," opposition lawmaker Freddy Guevara said at an outdoor news conference Thursday as residents looking out from balconies in a neighborhood at the heart of the protest movement cheered loudly in support.

The next planned protest is Saturday, when opponents are being asked to dress in white and march silently to commemorate the victims of the demonstration. Sit-ins to block major highways are planned for Monday.

General Motors announced early Thursday that it was closing its operations in Venezuela after authorities seized its factory in the industrial city of Valencia, a move that could draw the Trump administration into the escalating chaos engulfing the nation.

A number of major Latin American governments, including Mexico, Argentina and Brazil, called on Venezuela to take steps to increase democratic order and halt the violence that has been swirling around the protests.

The Supreme Court ruling reinvigorated Venezuela's fractious opposition, which had been struggling to channel growing disgust with Maduro.

Opponents are pushing for Maduro's removal through early elections and the release of dozens of political prisoners. The government last year abruptly postponed regional elections that the opposition was heavily favored to win and it cut off a petition drive aimed at forcing a referendum seeking Maduro's removal before elections scheduled for late next year.

But the government hasn't backed down.

Already drawing criticism for the GM seizure, Maduro announced late Thursday that he wanted an investigation into cellphone operator Movistar for allegedly being part of the "coup-minded march" organized by his adversaries Wednesday. That march was the largest and most dramatic the country has seen in years. He said the subsidiary of Spain's Telefonica "sent millions of messages to users every two hours" in support of Wednesday's protests.

As tensions mount, the government is using its almost-complete control of Venezuela's institutions to pursue its opponents. On Wednesday alone, 565 protesters were arrested nationwide, according to Penal Forum, a local group that provides legal assistance to detainees. It said 334 remained in jail Thursday.