Arkansas to carry out 1st double execution in US since 2000 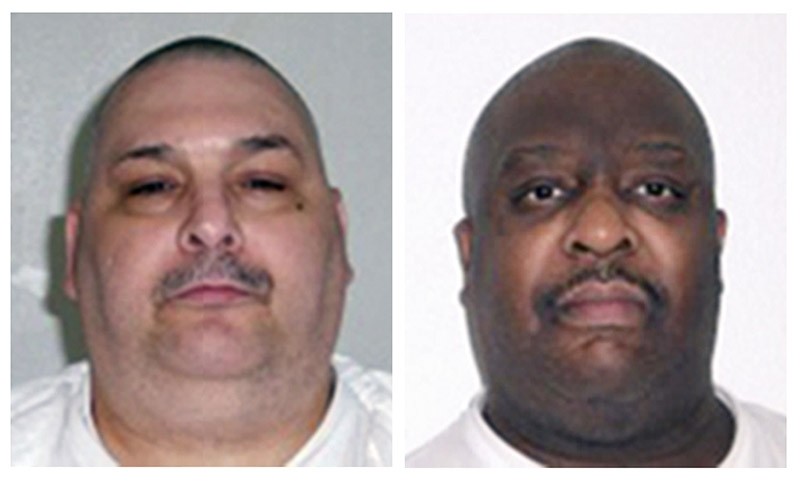 Two condemned Arkansas killers who admit they're guilty but fear their poor health could lead to extreme pain during lethal injections set for Monday might become the first inmates put to death in a double execution in the U.S. in more than 16 years.

Jack Jones and Marcel Williams are set to die in what would be the second and third Arkansas inmates executed this month as part of the state's aggressive plan to execute several inmates before one of its lethal injection drugs expires.

The state executed Ledell Lee last week in the state's first use of capital punishment since 2005. Gov. Asa Hutchinson originally scheduled four double executions over an 11-day period in April. The eight executions would have been the most by a state in such a compressed period since the U.S. Supreme Court reinstated the death penalty in 1976. The state said the executions needed to be carried out before its supply of the sedative midazolam expires on April 30.

The last time that a state put more than one inmate to death on the same day was when Texas executed two condemned killers in August of 2000.

Williams was sent to death row for the 1994 rape and killing of 22-year-old Stacy Errickson. He had kidnapped her from a gas station in central Arkansas.

Authorities said Williams abducted and raped two other women in the days before he was arrested in Errickson's death. Williams told the state Parole Board last month he took responsibility for his crime.

"I wish I could take it back, but I can't," Williams told the board.

Jones was given the death penalty for the 1995 rape and killing of Mary Phillips. He strangled her with the cord to a coffee pot.

In a letter earlier this month, Jones said he was ready to be killed by the state.

"I forgive my executioners; somebody has to do it," wrote Jones, who had a leg amputated in prison because of diabetes and uses a wheelchair.

The letter, which his attorney read aloud at his clemency hearing, went on to say: "I shall not ask to be forgiven, for I haven't the right."

The inmates have suffered several legal setbacks as the executions near. A federal judge on Friday rejected their request to stop the executions over their health concerns.

Two federal judges on Sunday ruled against the inmates in separate cases. One denied a stay of execution to Williams, saying that the 8th Circuit Court of Appeals has jurisdiction in the case. Another federal judge denied the inmates' request for changes to the rules for witnesses to view the executions.

After the setback in a lower court, both inmates on Sunday asked the appeals court to halt their executions based on their poor health.

Lawyers for Jones' say he suffers from diabetes and is on insulin, has high blood pressure, neuropathy and had one leg amputated below the knee. He is on heavy doses of drugs they say could prevent the lethal injection drug midazolam from working and lead to a "tortuous death."

Williams' lawyers say he weighs 400 pounds and it will be difficult to find a vein for lethal injunction, so the drugs are unlikely to work as intended.