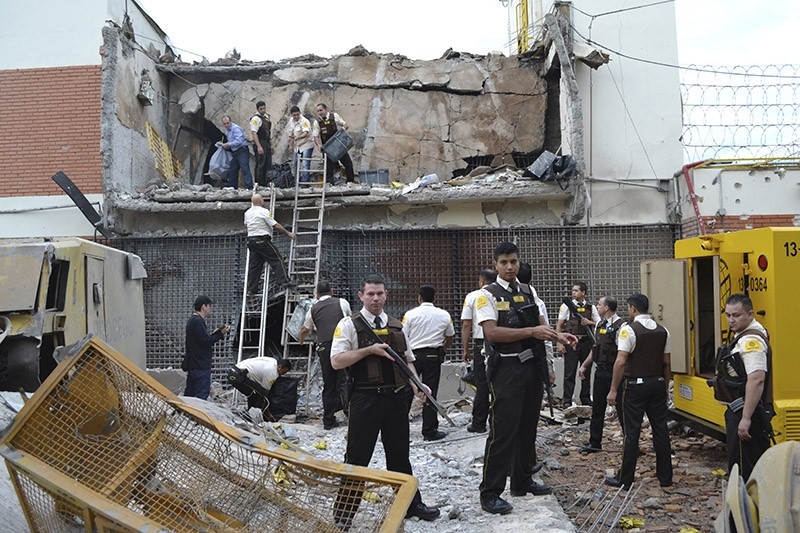 A gang of over 50 armed bandits have stolen several million dollars from a vault in Paraguay, in what local officials are dubbing the "robbery of the century."

The culprits, who police said were from Brazil, killed one police officer during the Monday raid in Ciudad del Este, the South American country's second-largest city.

Three robbers were killed hours later in an ensuing gun battle with Brazilian police across the border, the Paraguayan Interior Ministry said. Five members of the gang were arrested in Itaipulandia, 50 kilometres north of Ciudad del Este, the ministry added.

Initial estimates placed the cash haul at around 40 million dollars, but a spokesman for Prosegur, the security company targeted in the raid, denied these reports.

The gangsters used explosives to gain access to the vault at a cash-storage facility in the Paraguayan border city, which is known for its criminal gang activity.

Armed with assault rifles, they are thought to have made their escape to Brazil by motorboat via the Parana river. Investigations point to Primeiro Comando da Capital, or PCC, a major criminal organization in Brazil, police spokesman Augusto Lima said.

Shocked Paraguayan officials said it was an unprecedented attack for Ciudad del Este, a key trading hub near the borders of Brazil and Argentina in an area linked to drug gangs.

The target of the raid was Prosegur, a firm specializing in safely transporting cash. Far from simply overwhelming security at the facility, the raiders caused multiple diversions around the city, setting vehicles on fire to block roads and detonating explosives near police headquarters.

"The noise rang out around the city like bombs in a war," one man who witnessed the attack, Antonio del Puerto, told AFP.

Television images from the scene showed the Prosegur building was virtually destroyed, with rocket casings lying around and burned-out vehicles in the streets.

Police reports said the attackers included members of First Capital Command, one of Brazil's most powerful drug gangs, which is based in Sao Paulo and has fought turf battles in Rio de Janeiro and across the country's prison system.

Duarte said the Prosegur vault "was full" at the time of the robbery.

The attackers abandoned several vehicles at the site, including armored trucks, one of them mounted with what was described as an anti-aircraft gun.

"The security firm's premises has been destroyed and the attack caused chaos and terror in the city," the governor of surrounding Alto Parana state, Justo Zacarias, told reporters.

Paraguay's police chief Luis Rojas said it was "very feasible" that the attackers had help from within the police force.

He said he had contacted security forces in Brazil and Argentina to help catch the robbers.

"I am going to seek the resources and the best men to work to catch these people," he said.