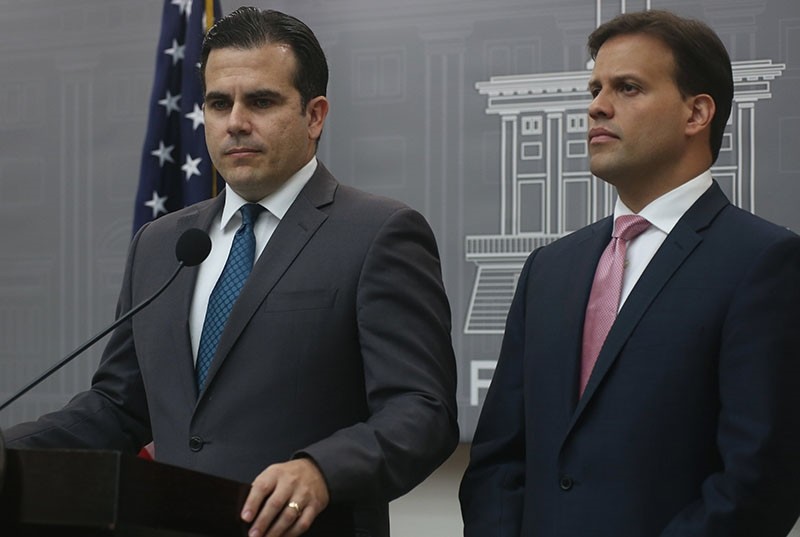 The Governor of Puerto Rico, Ricardo Rossello Nevares (L) and Representative to the Fiscal Supervision Board (JSF), Elias Sanchez (R), address a press conference at La Fortaleza de San Juan, in San Juan, P. Rico, May 03, 2017. (EPA Photo)
by Associated Press May 04, 2017 12:00 am

Puerto Rico's governor turned to the courts Wednesday to protect the U.S. territory from a crushing $73 billion debt in the largest effort ever made by a U.S. government to shield itself from creditors.

Gov. Ricardo Rossello made the announcement after negotiations with Puerto Rico's bondholders failed. Rossello said a federal control board overseeing the island's finances agreed with his request to put certain debts before a federal bankruptcy court.

The outcome of the case could have implications for financially troubled U.S. cities or states.

"We're going to protect our people," the governor said hours after the territory was hit with multiple lawsuits from creditors seeking to recuperate the millions of dollars they invested in bonds issued by Puerto Rico's government, which has declared several defaults amid a 10-year recession.

Rossello said one of the lawsuits sought to claim all revenues generated by the island's Treasury Department for bondholders.

"I'm not going to allow that to happen," he said.

Rossello said the debts of some agencies will be restructured in court, while others will be resolved through negotiations with bondholders. He said he did not yet have details on the breakdown of those debts. The island's Electric Power Authority owes some $9 billion, the Aqueducts and Sewer Authority has roughly $5 billion in outstanding debt and the Highways and Transportation Authority owes around $7 billion.

Overall, Puerto Rico has $73 billion in public debt. By comparison, the U.S. city of Detroit had less than $20 billion in overall debt when it filed for bankruptcy in 2013, which was the biggest U.S. municipal bankruptcy ever.

Puerto Rican officials triggered the bankruptcy-like process after declaring they could not agree to the huge cuts in spending and new taxes demanded by investors. A fiscal plan for Puerto Rico sets aside $800 million a year for debt payments, a fraction of the $35 billion due in interest and payments over the next decade.

A federal district court judge will now be in charge of the restructuring. Bondholders cannot challenge Rossello's decision for 120 days.

Elias Sanchez, the governor's representative to the federal control board, criticized creditors for filing lawsuits even as the governor continued to hold what he called good-faith negotiations after a litigation freeze expired Monday.

"When a line is crossed, the government has to act in favor of the people of Puerto Rico," Sanchez said.

A group representing some of those holding $16 billion worth of general obligation bonds accused the board of sabotaging consensual negotiations and forcing Puerto Rico into bankruptcy.

"The economy of Puerto Rico will be put on hold for years," said Andrew Rosenberg, adviser to the Ad Hoc Group of Puerto Rico General Obligation Bondholders. "Make no mistake: The board has chosen to turn Puerto Rico into the next Argentina."

Board Chairman Jose Carrion did not immediately address those comments, but said in an earlier statement that while the bankruptcy-like process is needed to offset lawsuits, consensual negotiations are still preferable and the board will pursue talks with willing creditors.

"The government's liquidity and solvency problems are massive and Title III has now become necessary to protect the people of Puerto Rico and avoid further negative impact on the economy from a flurry of litigation and continued uncertainty," he said, referring to the name of the bankruptcy-like process.

He told reporters that debt related to Puerto Rico's sales tax revenue bonds will likely be restructured in court.

In the next couple of days, the chief justice of the U.S. Supreme Court is expected to appoint a federal district court judge to oversee Puerto Rico's case, he said. Meanwhile, the island's government will continue to talk to creditors and seek a stay on the nearly two dozen lawsuits faced by the territory.

Sanchez noted that unlike a regular bankruptcy on the U.S. mainland, a judge cannot unilaterally seize any of Puerto Rico's assets and turn them over to bondholders.

"The courts cannot say, 'We're going to give you the Puerto Rico Coliseum or these properties from the Land Authority.' They just cannot do that without the consent of the board," Sanchez said.

While Detroit's case was resolved in a couple of years, it is unclear how long resolution could take for Puerto Rico.

"This is much bigger and much more complex than Detroit," Sanchez said, adding that he estimates the process could be completed within four years.

The announcement has sparked widespread uncertainty on the island, where Puerto Ricans are struggling with increases in taxes, higher utility rates and an unemployment rate that has hovered around 12 percent. The crisis has prompted nearly 450,000 Puerto Ricans to leave the island for the U.S. mainland in the past decade.

It is too early to say what kind of impact a debt restructuring in court will have on the 3.4 million people that remain on the island, economist Jose Joaquin Villamil told The Associated Press.

"(It) presents a very big risk for both parties," he said, referring to the government and to bondholders. "We don't know what a federal district court judge is going to decide."

Villamil said the process will further spook the type of investors that Puerto Rico's economy needs as it prepares to implement several austerity measures.

Economist Gustavo Velez told the AP that Rossello's announcement is the best path for Puerto Rico at this point. The governor's predecessor had announced that the $70 billion debt load was unpayable and needed restructuring.

"It's been three years of agony, uncertainty and negotiations that have cost the island millions in consultants that have produced no results," Velez said. "We cannot keep stretching this chewing gum further."