Number of US teens visiting hospitals grows after pot legalization 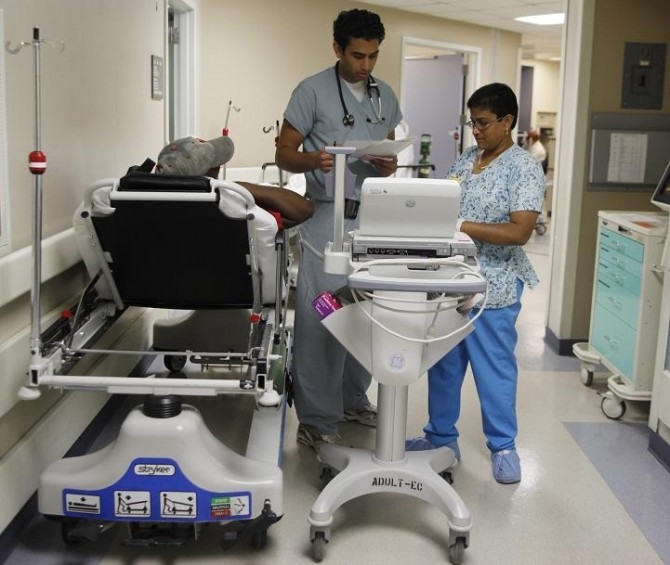 Hussain Gilani, Resident M.D. (C) reads over a patients electrocardiogram results in the hallway of the emergency room at Ben Taub General Hospital in Houston, Texas (Reuters File Photo)
by Anadolu Agency May 05, 2017 12:00 am

The number of visits by teenagers to emergency rooms in Colorado has increased nearly four times since recreational marijuana was legalized in the state in 2012, according to a new study Thursday.

The researchers poured through medical records of people aged 13 to 21 years old who visited Colorado's hospitals and urgent care centers between 2005 and 2015.

They found that the number of teens who either admitted they partook of marijuana or had traces of the substance in a urine sample increased from 146 in 2005 to 639 in 2014.

Recreational marijuana has been available since 2014 in Colorado, one of the first states to completely legalize the substance in the United States, after a state ballot measure two years earlier. Several other states, including California, have passed similar legislation in the ensuing years.

Conducted by researchers at the University of Colorado, the research is scheduled to be presented next week in San Francisco at the 2017 Pediatric Academic Societies Meeting.

"The state-level effect of marijuana legalization on adolescent use has only begun to be evaluated," lead author George Sam Wang said in a statement.

"As our results suggest, targeted marijuana education and prevention strategies are necessary to reduce the significant public health impact the drug can have on adolescent populations, particularly on mental health."