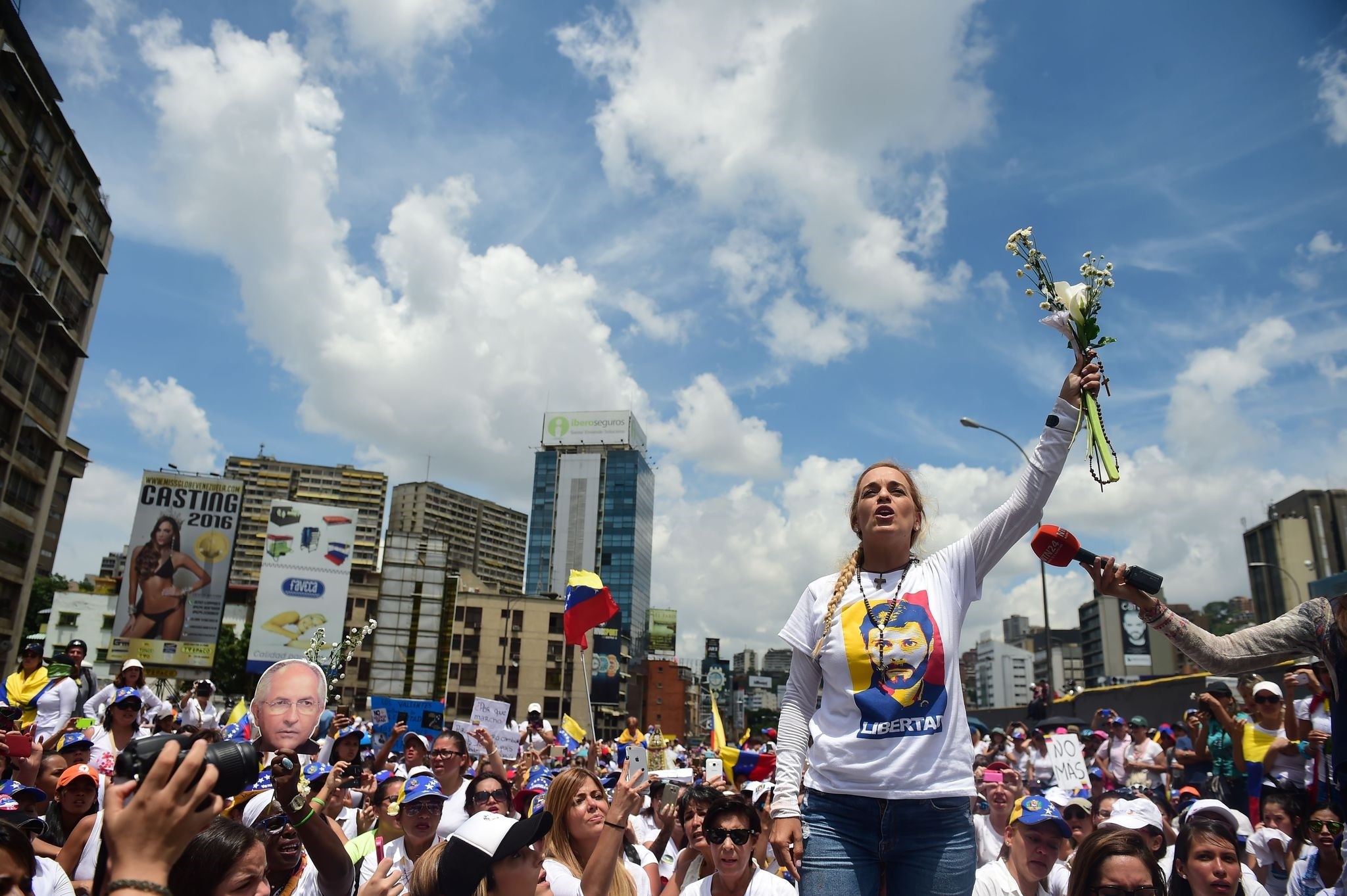 The wife of imprisoned opposition leader Leopoldo Lopez, Lilian Tintori, takes part in a women's march aimed to keep pressure on President Nicolas Maduro. (AFP Photo)
by May 06, 2017 12:00 am

Dressed in white and chanting "Liberty!", tens of thousands of women opposed to Venezuela's socialist President Nicolas Maduro marched on Saturday, proffering roses to security forces who blocked their way.

The women's marches, which took place in most major cities around the South American oil producer, were the latest in five weeks of sustained protests against Maduro whom opponents decry as a dictator who has ruined the economy.

In Caracas, marchers sang the national anthem and shouted "We want elections!" They were halted at various points by lines of policewomen and National Guard troops with armored cars.

The opposition, which has majority support in Venezuela after years of being in the shadow of the ruling Socialist Party, is demanding that delayed state elections be held and the 2018 presidential vote be brought forward.

They also want the government to free scores of jailed activists, allow humanitarian aid from abroad to offset a brutal economic crisis, and respect the independence of the legislature where the opposition won a majority in 2015.

Highlighting vandalism and violence by young masked protesters, Maduro says opponents are seeking a coup with U.S. support and harbor "terrorists" and "murderers" in their ranks.

In response to the crisis, the 54-year-old successor to Hugo Chavez is setting up a super body known as a "constituent assembly" with powers to rewrite the constitution, shake up public powers, and potentially replace the legislature.

"This march is against opposition terrorism, they are destroying everything," said cook Fredesvilda Paulino, 54, at a pro-government rally also in Caracas on Saturday where red-shirted women waved pro-Maduro flags and banners.

The women's marches were organized as part of an opposition attempt to vary tactics and keep momentum against Maduro.

Women have often been feeling the brunt of Venezuela's economic crisis due to widespread food and medicine shortages, huge lines at shops, soaring prices, and increasing hunger in the nation of 30 million people.

Since the anti-Maduro protests began in early April, at least 37 people have died, with victims including supporters of both sides, bystanders and members of the security forces.

Opposition leaders say the constituent assembly is a biased mechanism designed to keep an unpopular leader in power.

They say the government is to blame for violence by young protesters as authorities are refusing a free vote to resolve the crisis and are needlessly blocking and repressing marches.

"Just let us vote, and this will all end," said teacher Anlerisky Rosales, 22, in the opposition women's march in Caracas. "There is too much suffering in Venezuela. If we have to, we will give our lives in the street until Maduro goes."

At one point, a female government official emerged from the security lines to receive a petition and talk with the demonstration leaders.

With Maduro's approval ratings at around 24 percent - less than half the level at the time of his narrow election victory in 2013 - and Venezuela suffering a fourth year of harrowing recession, the opposition's challenge is to keep up street pressure and draw in support from poor former "Chavista" sectors.

Officials are hoping they become exhausted and disillusioned, while highlighting the violence of young opposition hotheads to try to discredit the whole opposition.

Many Venezuelans are closely watching the armed forces, who have the potential to tip the balance if they disobey government instructions or give Maduro a nudge behind the scenes.

Top armed forces officials have been pledging loyalty in public, though opposition leader Henrique Capriles said on Friday that 85 military officials had been arrested for dissent.