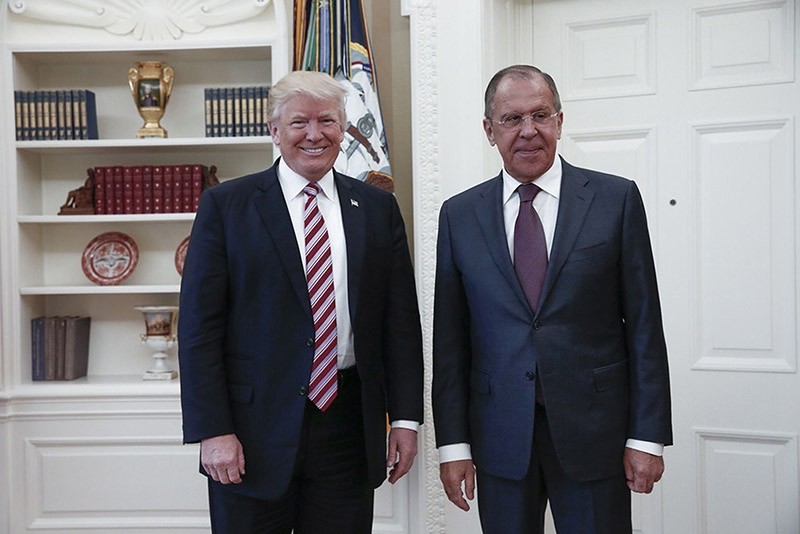 US President Donald J. Trump (L) posing with Russian Foreign Minister Sergei Lavrov (R) during their meeting at the White House in Washington, DC on May 10, 2017. AFP Photo.
by Daily Sabah with Wires May 16, 2017 12:00 am

U.S. President Donald Trump tweeted Tuesday that he had an "absolute right" to share intelligence information with Russia, responding to reports that he had divulged highly classified data to senior Russian officials, while the Kremlin called the reports "nonsense" and "not an issue."

President Trump defended revealing information to Russia, saying in a pair of tweets that he shared "facts pertaining to terrorism and airline flight safety."

Trump also tweeted that he had shared the information for "humanitarian reasons," adding that he wanted "Russia to greatly step up their fight against ISIS & terrorism."

Trump added a line in his tweet suggesting why he did it: "Humanitarian reasons, plus I want Russia to greatly step up their fight against ISIS & terrorism," using a different acronym for the Daesh terrorist group.

"For us it is not an issue, it's more nonsense," Peskov said when asked about the Washington Post report, which claimed that Trump had shared highly classified information during a meeting last week with Russian Foreign Minister Sergei Lavrov.

"We want nothing to do with this nonsense," he said. "It's not an issue for confirming or denying, it's complete nonsense," Peskov added.

The Washington Post reported Monday that Trump divulged highly classified "code-word" information that could enable the Russians to trace the source of the intelligence.

Citing unnamed officials, the report said Trump went off script during a meeting with Lavrov and Russian envoy to Washington Sergei Kislyak and described details about a Daesh terror threat related to the use of laptop computers on airplanes.