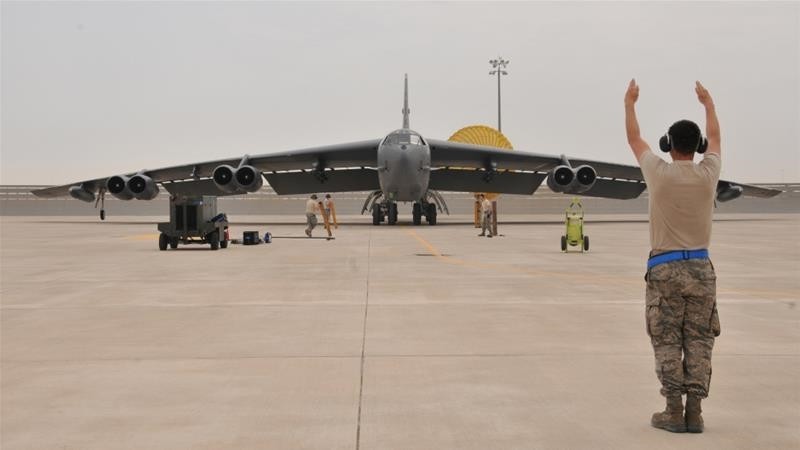 A US Air Force B-52 Stratofortress bomber arrives at Al Udeid Air Base, Qatar (Reuters File Photo)
by Compiled from Wire Services Jun 06, 2017 12:00 am

A Saudi-led move to isolate Qatar has had "no impact" on U.S. military operations in the emirate, nor is any expected, a Pentagon spokesman said Tuesday.

"There has been no impact on our operations either in Qatar or with regards to airspace permission around it and we don't anticipate there will be," Pentagon spokesman Jeff Davis said.

He renewed praise of Qatar for hosting U.S. forces and its "enduring commitment to regional security," sticking to a message of reassurance even as President Donald Trump, via Twitter, applauded a decision by Arab powers to cut ties to the Gulf ally.

The comments were the latest example of the tightrope that U.S. officials are walking as Trump's tweets raise questions about existing U.S. policy and the carefully scripted talking points used to explain it.

In the case of Qatar, the stakes are high. More than 11,000 U.S. and coalition forces are deployed to or assigned to al Udeid Air Base, from which more than 100 aircraft operate.

Of those 11,000, nearly 1,000 work in a combined air operations center that helps oversee missions for campaigns in Iraq, Syria and Afghanistan, the military says.

U.S. officials had said on Monday that the United States would quietly try to calm the waters between Saudi Arabia and Qatar, arguing that the small Gulf state was too important to U.S. military and diplomatic interests to be isolated.

But Trump, wading into the worst split between powerful Arab states in decades, said on Tuesday his trip to the Middle East was "already paying off" with leaders there taking a hard new line in accusing Qatar of funding of militant groups.

The Pentagon, which seeks to steer clear of political matters, was unable to reconcile Trump's support for Qatar's isolation with its own praise for its commitment to regional security.

Asked directly about the disconnect, spokesman Navy Captain Jeff Davis told a news briefing: "I can't help you with that."

"We continue to be grateful to the Qataris for their longstanding support for our presence and their enduring commitment to regional security," Davis said, adding the United States had no plans to alter its presence in Qatar.

The U.S. envoy to Qatar, Dana Shell Smith, retweeted on Monday a message from October in which she praised the U.S. partnership with Qatar, citing "real progress to counter terrorist financing."

U.S. Air Force Secretary Heather Wilson told a Senate committee on Tuesday she was not concerned about the U.S. air base in Qatar and added that U.S. operations continued without interruption.

The Pentagon also declined to answer a question about whether Qatar supported terrorism, the accusation made by Arab states who appeared to now have the political backing of the U.S. president.

Davis, sticking to U.S. military-related matters, said: "I'm not the right person to ask that. I consider them a host to our very important base at al Udeid."