7,000-square-foot house located both in Canada and US goes on sale 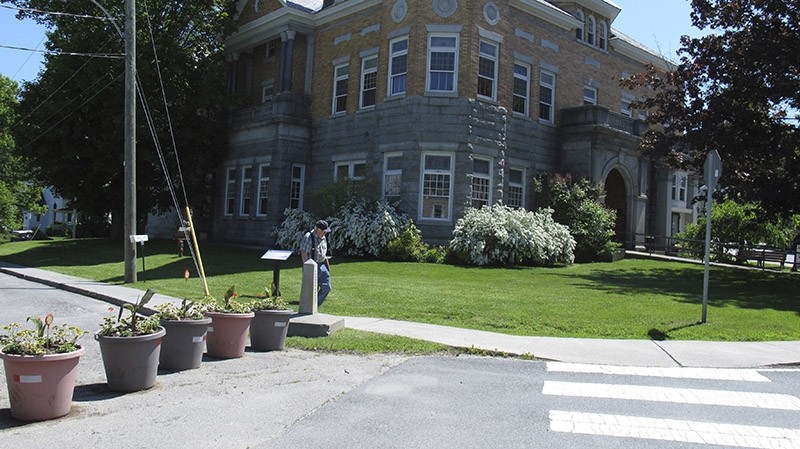 In this photo taken on June 8, 2017 in Derby Line, Vt., a border post and planters show the U.S.-Canadian border where it leads to the Haskell Opera House and library, a building located in the two countries. (AP Photo)
by Associated Press
Jun 10, 2017 12:00 am

For sale: A 1782 fixer-upper with thick granite walls, 1950s decor, and armed 24-hour security provided by both Canada and the United States of America.

The almost 7,000-square-foot house, cut into five currently vacant apartments, is on a lot of less than a quarter-acre that, along with the building itself, straddles the border between Beebe Plain, Vermont, and Stanstead, Quebec.

Selling a home in two countries is proving to be a challenge for the couple who owns it. The structure, which has an estimated rebuild cost of about $600,000, is on the market for $109,000. It's structurally sound but needs lots of work. And then there's that international border.

"In the day, it was a normal and natural thing," Brian DuMoulin, who grew up in the house and was accustomed to life literally on the border at a time when no one thought twice about crossing from one country to the other. "Now it stresses everyone out."

The home, known locally as the Old Stone Store, was built by a merchant so he could sell to farmers in both Vermont and Quebec. Brian and his wife, Joan DuMoulin, inherited it about 40 years ago.

Now the couple, in their 70s, who have dual U.S. and Canadian citizenship and a home in nearby Morgan, Vermont, are hoping to sell it so they can move to Ontario to be closer to their children and grandchildren.

Beebe Plain is a community in the Vermont town of Derby, which along with Stanstead, about 60 miles (96 kilometers) northeast of Montpelier, or 75 miles (120 kilometers) southeast of Montreal, have become the cliché of security changes on the U.S.-Canadian border brought on by the 9/11 attacks on the United States.

Residential streets that used to be open were blocked by gates. The back doors of an apartment building straddling the border in Derby Line village have been locked shut. The street next to the Haskell Free Library and Opera House, deliberately built in both countries, is blocked by flower pots, although Canadians are still allowed to walk to the library's U.S. entrance without going through a border post.

The DuMoulins' house is directly across Stanstead's Rue Principale from the port of entry staffed by agents of the Canada Border Services Agency and adjacent to a U.S. Customs and Border Protection post.

Troy Rabideau, the U.S. Customs and Border Protection assistant port director for the area that includes Beebe Plain, said the agents know who live there, but keeping track can be a challenge.

"It's always a fine line," Rabideau said. "We do the best we can to keep an eye on it. We do what we have to do, security first, but we also want the support of the locals."

The DuMoulins' house has entrances from the United States and Canada. Agents have come to know the people who live in the house, currently vacant, and allow them to move back and forth freely as long as they stay in the house or the tiny front or backyard. There's a small granite border marker just outside the front door.

There is a gate hidden in a backyard hedge. DuMoulin said U.S. agents wanted to be sure the gate was wired shut. It is.

Rosemary Lalime, their real estate agent, said that between the time the house was listed around the turn of the year and the end of May when a Canadian magazine noted its odd location she showed it 10 times. In the last two weeks she's shown it six times and has six more appointments.

All but one person has come from the United States. One man called from Toronto.

"He was inquiring more about the border situation and if he bought it, what are his rights," Lalime said. "I put him in touch with the Border Patrol."

Brian DuMoulin said that usually the agents from both countries know who they are, but he told of a time when a new Canadian border agent saw him, his wife and her sister standing in front of the house, "a good 18 feet into the States." He demanded they report to the Canadian border post.

"He simply didn't know," DuMoulin said, noting it took about 45 minutes to resolve the situation after the agent called his superiors.

"That's the awkwardness," he said. "If there is an awkwardness, it's that you can't just go this way or this way, you've got to go through (the ports of entry) and then back through."