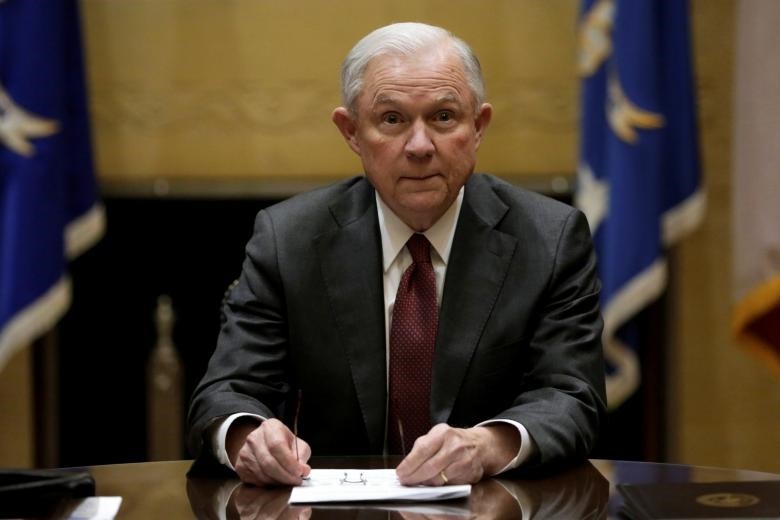 Attorney General Jeff Sessions declared that the notion of him colluding with any foreign officers during or after the 2016 campaign is disinformation.

"The suggestion that I participated in any collusion, that I was aware of any collusion with the Russian government, to hurt this country which I have served with honor for 35 years, or to undermine the integrity of our democratic process, is an appalling and detestable lie."

Sessions was grilled on months-old questions, such as if he had privately met with any Russian officials, including Russian ambassador to the United States, Sergey Kislyak, what the nature of the Mayflower Hotel event was and why he decided to recuse himself from the ongoing investigation into the 2016 campaigns.

He was also asked to shed more light into the testimony of former FBI-Director Jim Comey, and what was the level of his involvement in Comey's dismissal by President Donald Trump.

Sessions also went after the numerous leaks that have occurred during and since the transition period, for example President Trump's phone calls with the Mexican and Russian presidents as well as the Australian prime minister. Leakers are also responsible for the downfall of General Michael Flynn's downfall

On April 27, 2016, then-Candidate Trump held his Campaign's first major foreign policy speech at the Mayflower Hotel in Washing, D.C. Speaking to a crowd of roughly two to three dozen people, a lot of whom were foreign diplomats, he laid out his plans for putting "America first."

Sessions was asked whether on that day at the Mayflower he had met with Ambassador Kislyak, who was present at the event, to which he responded that he did not recall whether or not he had met the man and later further cleared up his answer by saying that he had possibly shaken his hand and exchanged pleasantries with him as he had done with dozens of others that evening, just like Trump had done, however he did not have a private room in which he could conduct a meeting, or any speech in which he could conduct anything of the sort. In essence, Sessions implied that even if he had "encountered" the Russian ambassador, it would have been impossible to discuss anything important due to the presence of many others in the hotel.

Being the subject of overtones by some committee members that he's betraying his country and his nation, Sessions was further asked on why he had decided to recuse himself on March 2, with the implication being that it had something to do with Comey's dismissal as well as the Russia investigation.

Sessions was a prominent member of the Trump campaign and the first Senator to endorse Trump.

"The specific reasons," Sessions explained, "is a CFR (Code of Federal Regulations) put out by the Department of Justice. […] I will read from it. 28 CFR 45.2. Unless authorized, no employee shall participate in a criminal investigation or prosecution if he had a personal or political relationship with any person involved in the conduct of an investigation that goes on to say for political campaign and it says if you have a close identification with an elected official or candidate arising from service as a principal adviser, you should not participate in an investigation of that campaign. Many have suggested that my recusal is because I felt I was a subject of the investigation myself, I may have done something wrong. This is the reason I recused myself: I felt I was required to under the rules of the Department of Justice and as a leader of the Department of Justice, I should comply with the rules obviously."

He also explained that he had extensive meetings with ethics experts of the DOJ, who also recommended that he recuse himself from this specific investigation due to possible conflicts of interest.

"I recused myself from any investigation into the (2016) campaign for president but I did not recuse myself from defending my honor against scurrilous and false allegations."

Comey had expressed his feeling that his dismissal was suspicious during his own hearing one week ago, however he said that he couldn't talk about these matters in detail.

Sessions was asked what these matters were, to which he, almost heatedly, responded: "Why don't you tell me? There are none, Senator (Ron) Wyden [D], there are none! I can tell you that with absolute certainty."

He went on accusing Wyden of implying falsehoods.

"This is a secret innuendo being leaked out there about me and I don't appreciate it."

As has already been public knowledge for months, Sessions had encountered Kislyak at the Mayflower Hotel, and then met with him in his office "in an official way." Sessions also said that he had a "little disagreement over the Ukrainian issue" with the ambassador. He had met with the Ukrainian ambassador in his office the day before. Sessions was meeting with several ambassadors in his capacity as a Senator and a member of the Armed Services Committee.

"I don't recall any discussion of the campaign in any significant way. It was in no way some sort of coordinating of an effort or doing anything improper and I don't believe anybody that was in that meeting would've believed I've said one thing that was improper or unwise," Sessions had said in an interview a day after his self-recusal.