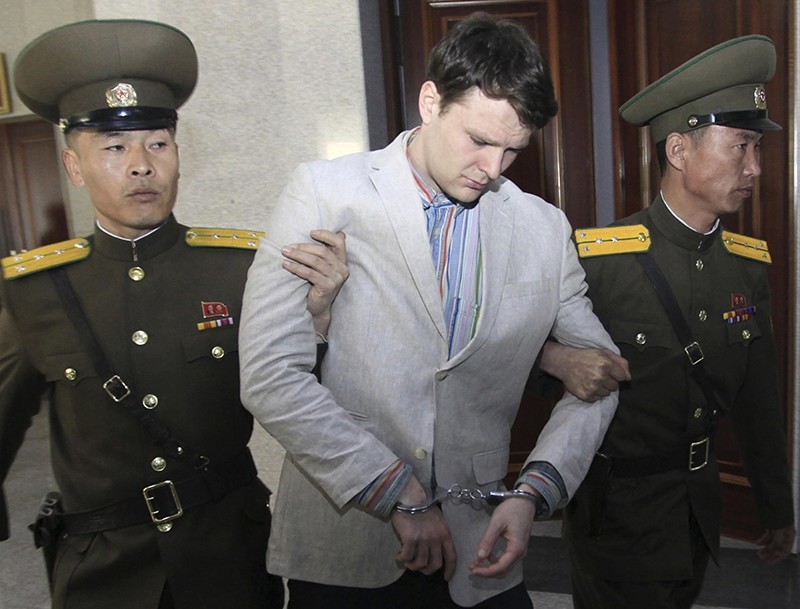 President Donald Trump said Tuesday that the death of 22-year-old Otto Warmbier after his lengthy detention in North Korea was a "total disgrace," and said if the college student had been returned home to the U.S. earlier, "I think the result would have been a lot different."

Trump said he had spoken with Warmbier's parents, telling reporters in the Oval Office that it was "incredible what they've gone through." Seated next to the president of Ukraine, Petro Poroshenko, Trump said Warmbier "should have been brought home a long time ago."

"It's a total disgrace what happened to Otto. That should never ever be allowed to happen," Trump said. "And frankly if he were brought home sooner I think the result would have been a lot different."

The Ohio college student died Monday at a Cincinnati hospital, nearly a week after his return to the United States after being held in North Korea for more than 17 months. Warmbier's parents have not cited a specific cause of death, but pointed to "awful, torturous mistreatment" by North Korea.

Doctors have described Warmbier's condition as a state of "unresponsive wakefulness" and said he suffered a "severe neurological injury" of unknown cause.

Relatives have said U.S. envoys told them that North Korean officials said Warmbier contracted botulism after his trial and became comatose after taking a sleeping pill, according to the Washington Post. Fred Warmbier, the student's father, has said he does not believe this account.

The University of Virginia student was accused of trying to steal a propaganda banner while visiting with a tour group and was convicted of subversion. He was sentenced in March 2016 to 15 years in prison with hard labor.

The Ohio coroner examining the death of a University of Virginia student who was held prisoner in North Korea for 17 months expects to share preliminary findings of the autopsy on Tuesday or Wednesday, her office said.

Warmbier, who was born in Ohio, was arrested in North Korea in January 2016 while visiting as a tourist. He was sentenced to 15 years of hard labor for trying to steal an item bearing a propaganda slogan from his hotel in Pyongyang, the nation's state media said.

Tensions between the United States and North Korea have been heightened by dozens of North Korean missile launches and two nuclear bomb tests since the beginning of last year in defiance of U.N. Security Council resolutions. The North Korean government has vowed to develop a nuclear-tipped intercontinental ballistic missile capable of hitting the U.S. mainland