Most US terror attacks carried out by right-wing extremists, report shows 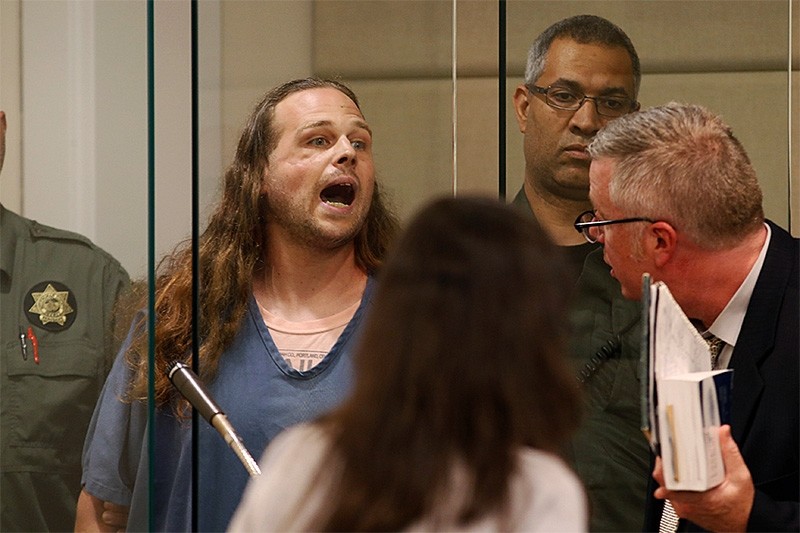 A convicted felon, Jeremy Christian, 35, who fatally stabbed two men who tried to stop him from harassing a pair of Muslim women, shouts during an appearance in Multnomah County Circuit Court in Portland. (Reuters Photo)
by Daily Sabah Jun 24, 2017 12:00 am

A joint report by the Investigative Fund at the Nation Institute and the Center for Investigative Reporting shows that the majority of terror attacks in the US from 2008 to 2016 were carried out by right-wing extremists.

The study stated that "right-wing extremists were behind nearly twice as many incidents" as terror acts described in the report as "Islamist domestic terrorism", referring to terror groups such as Daesh.

Right-wing extremists, many of them from white supremacist groups, carried out 115 terrorist attacks in that period, while groups with similar motivations to Daesh carried out 63 attacks.

Despite the larger number of right-wing attacks, police halted only 35 percent of those attacks compared with 76 percent of attacks by groups similar to Daesh.

Police used preemptive sting operations before almost half of Daesh-type attacks, but four times less against other types of extremism.

Terror groups similar to Daesh killed 90 people in the U.S., while other extremists killed 79.

However, right-wing extremists were more likely to kill, as 33 percent of right-wing attacks involved deaths as compared to 13 percent of Daesh-type attacks.

Leftists killed seven people in the same period, with a total of 19 attacks.

Based on the statistics, the report criticized President Donald Trump's rhetoric that focuses on Muslims as the main terror threat to the U.S.

The report also noted that extremists who attack Muslims are given more lenient prison sentences.

Attacks on non-Muslim institutions or the general public received an average sentence of 14.5 years in prison, with seven death sentences, in contrast with attacks on Muslims or mosques that resulted in sentences of under nine years and no death sentences.