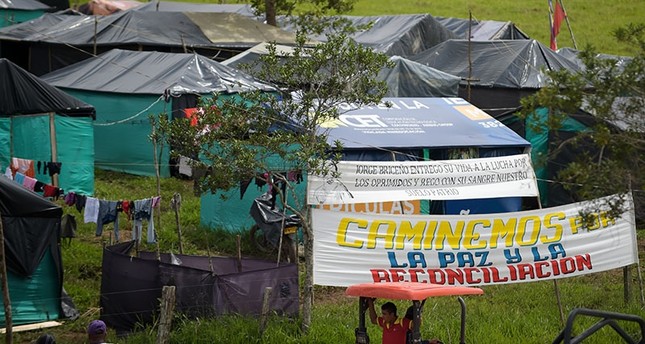 General view of the Transitional Standardization Zone Mariana Paez, Buena vista, Mesetas municipality, Colombia on June 26, 2017, before the final ceremony of abandonment of arms and the FARC's end as an armed group. (AFP Photo)

Leftist rebels in Colombia have turned over almost all of their fighters' individual weapons as part of a historic peace deal reached with the government last year to end a half century of conflict, the United Nations said Monday.

A U.N. statement said it had received 7,132 weapons belonging to Revolutionary Armed Forces of Colombia (FARC) fighters. A smaller number of weapons will remain in the hands of guerrillas until Aug. 1, providing protection at 26 rural camps where the FARC's 7,000 fighters are making their transition to civilian life.

"On that date the mission will have stored all the existing arms in the camps and extracted the containers from the zones," the U.N. said in a statement. The group has also destroyed armaments kept in 77 FARC storage areas.

The weapons hand-over will be celebrated in a ceremony in Mesetas, in Meta province, on Tuesday. Some 520 members of FARC (Revolutionary Armed Forces of Colombia) are currently gathered there.

The announcement comes a day before President Juan Manuel Santos and the FARC's top commander Rodrigo Londono, better known by his nom de guerre Timochenko, are to meet in one of the rural camps to commemorate the completion of the disarmament process.

Londono called the disarmament "a historic moment for Colombia," ahead of Monday's UN announcement.

"The laying down of arms is an act of will, courage and hope," he wrote on Twitter.

Santos said last week that the event "changes the history of Colombia."

"The FARC, the most powerful and oldest guerrilla force in Latin America, will cease to exist," he said in a speech in Paris.

The rebels were supposed to have turned in all of their weapons by the end of May under the original terms of the peace deal but there have been numerous delays.

The first year of implementing the peace deal has been behind schedule on everything from building demobilization zones to passing laws to implement the accords. Nonetheless both the FARC and the government say they are making steady progress as the rebels transition to civilian life.

The accord, first signed in November, was narrowly rejected by Colombians in a referendum before being redrafted and pushed through Congress. Critics had said it was too lenient on FARC members.

Santos won last year's Nobel Peace Prize for his efforts to reach a peace deal, ending a conflict that has lasted more than 50 years.

The landmark deal includes rural reforms, joint action against drug trafficking, political participation of demobilized guerrillas and the creation of a system of transitional justice.

Colombia has been riven by internal conflict since the 1960s, as FARC and other left-wing rebels battled the military, police and right-wing paramilitaries.

Born out of political struggles between liberals and conservatives in the 1950s, the group came to life in the 1960s as an armed faction of Colombia's Communist Party, and took up violence as a response to inequality in land rights.

The former fighters are now due to make the transition into civilian life. The Revolutionary Armed Forces of Colombia (FARC) will transform into a political party.

Weapons "fulfilled a function at one time, but today we are making a political decision and we no longer need them," senior FARC commander Mauricio Jaramillo told AFP.

The accord, first signed in November, was initially narrowly rejected by Colombians in a referendum before being redrafted and pushed through congress.

Critics such as conservative political leader Alvaro Uribe said it was too lenient on FARC members, some of whom will get amnesties or reduced sentences for crimes committed during the conflict.

Santos says he wants to seal a "complete peace" by reaching a deal with the country's last active rebel group, the leftist National Liberation Army (ELN).

The ELN started talks with the government in February, but has been blamed for ongoing confrontations with state forces.

Officials say remnants of right-wing paramilitary groups are also fighting the ELN in rural areas for control of the drug trade that has fueled the conflict.

Three women were killed in a bombing at a crowded shopping center in Bogota on June 17. That was blamed on a fringe extremist group, the Revolutionary People's Movement (MRP).

Here are five key elements of the peace accord that the sides say will end Latin America's oldest civil conflict.

Arms: The FARC have handed their weapons to United Nations monitors in return for security guarantees for demobilized fighters. The rifles will be melted down and turned into three monuments in Colombia, New York and Cuba, which hosted peace talks.

Courts: Those accused of crimes in the conflict will go before special courts and could get reduced sentences if they confess. Most are expected to do so. Those who do not face up to 20 years in jail. The FARC has pledged to use its assets to compensate victims.

Drugs: The FARC have promised to help stamp out the drug production that has fueled the conflict in areas under its control. The state promised to develop alternative sources of revenue for growers of coca, the raw ingredient of cocaine.

Politics: The FARC will transform into a political party, with five seats in each chamber of congress granted to it under the accord. FARC members could win more seats in the 2018 elections. Their candidates are granted protection against possible attack by groups opposed to the accord.