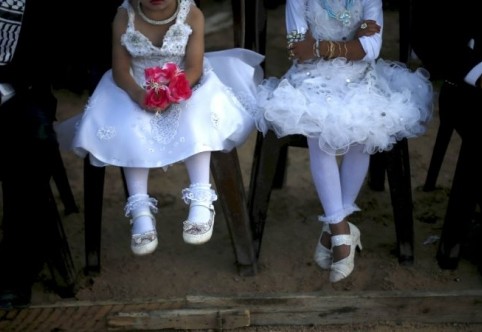 Underage marriage remains widespread in the U.S., with at least 207,468 minors having been legally married across the country between 2000 and 2015, according to Unchained At Last, a nonprofit that opposes arranged and forced marriages.

87 per cent of the minors who married were girls, and mostly 16 or 17 years old, the Independent reported.

The youngest children to wed were three 10-year-old girls from Tennessee in 2001 and an 11-year-old boy from the same state in 2006.

12-year-olds were also granted marriage licenses in Alaska, Louisiana and South Carolina, and 11 other states permitted 13-year-olds to marry.

1,000 children aged 14 or under were also issued marriage licenses, according to the Independent.

The latest figures released by Unchained at Last had been for the years between 2000 and 2010, where they had estimated that more than 167,000 children married underage.

Minors are currently allowed to marry in many states in the U.S. provided that they obtain permission from both parents and the court. There are also other legal loopholes that allow children to wed, such as teen pregnancy, which forgoes parental consent.

Research has shown that child marriages are associated with higher rates of unwanted pregnancies, abuse, and divorce. Child marriage and forced marriage also disproportionately affect girls and women, and those who marry in their teens are also more likely to develop psychiatric disorders, have limited or no access to education and have fewer career opportunities.

Child marriage has been a hotly-debated issue in the U.S. and many states have begun to take better action against it by updating their old laws and introducing new measures to protect children.

However, New Jersey Governor Chris Christie refused to sign a law last May that would have banned marriage for those under 18 years of age in his state, saying that not allowing any exceptions would conflict with "religious customs" and "the cultures and traditions of some communities." The move caused public outcry across the state and country.

The situation around the world is no different, and although the global child marriage rate is declining, according to Girls Not Brides' data, every two seconds a girl under the age of 18 becomes a bride.