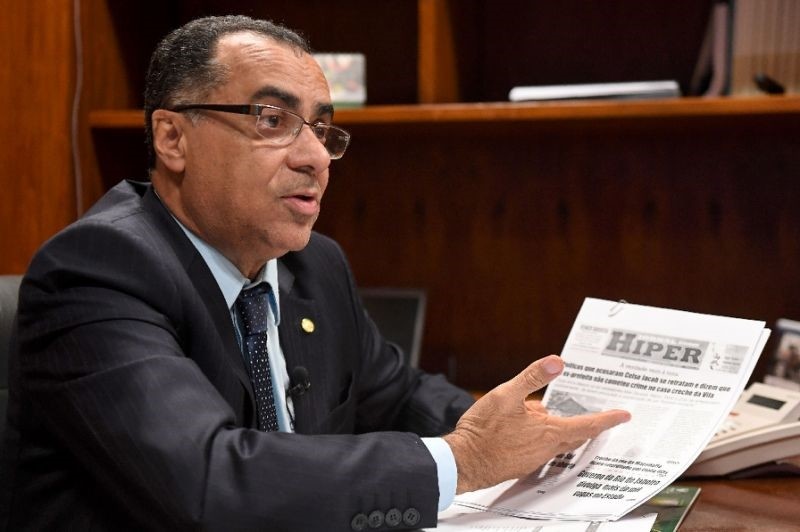 For many politicians, a jail sentence means the end of your career, but not for lawmaker Celso Jacob. He still comes each day to Brazil's National Congress -- straight from prison.

Each morning he gets up at 5:00 am in the Papuda jail near Brasilia and waits for a car to take him to work. In the evening he returns and changes from his suit back into white prisoner's overalls.

"I am imprisoned, but I am not a prisoner," says the 60-year-old, on day release as he serves a seven-year jail term for administrative fraud when he was a mayor.

Many convicts are allowed to work in Brazil under such partial release arrangements. But Jacob is the only member of Congress known to have been allowed to keep working in such a situation.

Under the partially-open prison regime, he is forbidden from going to the cinema, shopping or visiting his family.

But he is allowed to go to Congress and vote on the nation's laws and big political issues of the day.

That includes casting a vote in support of President Michel Temer, who himself risks facing trial for corruption.

Jacob became a full member of the lower house of Congress in January. That was partly due to a reshuffle after the speaker of the chamber Eduardo Cunha was sacked, having himself been convicted of corruption.

Six months later, a case dating to Jacob's time as mayor of the town of Tres Rios in 2003 caught up with him.

The Supreme Court found him guilty of forgery and of irregularities in the awarding of a public contract. He was arrested on June 6 at Brasilia airport.

He arrived to prison fearful: with a history of gruesome gang riots, Brazil's prisons are considered some of the most dangerous in the world.

"The penal system in Brazil is not designed to rehabilitate anyone," he tells AFP in his office in Congress.

"Where I am is better than some places, but I would not recommend it."

Jacob denies the charges that were made against him, saying he just made "technical" errors.

He says he was tricked by his advisers who slipped an unapproved clause into a legislative bill before handing it to him to sign.

In the case of the public works contract, he says he pushed through the deal to get a nursery built since the project had been delayed for years.

"Those who know me -- and in my town they know me well -- are suffering with me," he says.

"Those who don't know me think I am just another thief who embezzled and robbed. It is hard to separate the wheat from the chaff."

Jacob's conviction cannot be appealed but he hopes to gather new testimonies and get the case reopened.

It is a hard time to be doing that in Brazil.

Jacob is just one of hundreds of senior politicians convicted in a wave of fraud and graft scandals that finally reached Temer's door last month.

"These are difficult political times because we are surrounded by accusations and large-scale embezzlement," Jacob says.

"In normal times, nothing would come of a case like mine."

On weekdays Jacob goes to Congress, where he sits on the education and human rights commissions in the lower house.

Some weekends he stays in the prison, where he shares a cell with two other inmates.

For every three days worked, he knocks a day off his jail time under the terms of sentence. At this rate, he hopes to be out on full parole in 10 months.

In spite of everything, he says he trusts Brazil's justice system -- and his faith in God reassures him.

"I am fighting my case. I can turn my situation around," he says. "And I am certain that I will."