US FETÖ complex silent one year after failed coup 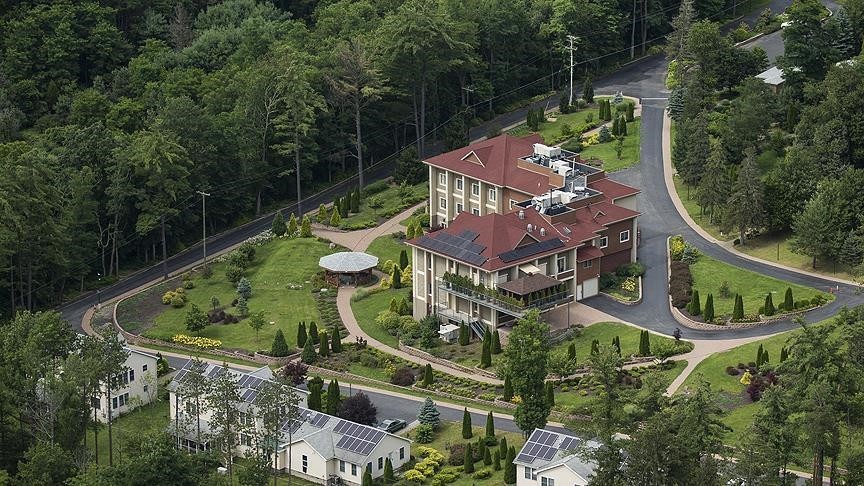 A group of demonstrators and media personnel were removed Saturday from the front of the compound where Fetullah Terrorist Organization (FETÖ) ringleader, Fetullah Gülen lives in Saylorsburg, Pennsylvania.

Protesters demonstrating on the one-year anniversary of the deadly coup attempt blamed on FETÖ and its leader, were removed by police at the request of the compound's director who said demonstrators posed an unspecified threat to those inside, an officer told Anadolu Agency.

The entry and exit to the sprawling secretive 400-acre compound was then closed.

Anadolu Agency flew above the eerily quiet and seemingly empty compound Saturday where the terror leader has resided since 1999.

At least 10 buildings, two of which are each at least seven stories, were spotted below where three individuals were seen trying to escape the cameras while two others recorded the helicopter's movements. No other sign of life existed at the complex.

Ankara accuses FETÖ and Gulen of plotting to overthrow the Turkish government in what was to be the culmination of a long-running campaign to infiltrate Turkish institutions, including the military, police and the judiciary.

The defeated coup martyred 250 people and injured nearly 2,200 others.

Gülen has denied the accusations in the few interviews he has given since the coup attempt and tried to distance FETÖ from an FBI investigation into improper use of funds by his vast network of charter schools and businesses across the U.S., including funneling money to the organization to finance subversive operations in Turkey and abroad.

Turkey has sought Gülen's extradition to face the charges but has been frustrated with the pace of the U.S. government processing of Ankara's request, despite an existing treaty between the two NATO allies.

Turkish Americans launched a petition Thursday that demands their elected representatives and the federal government extradite Gülen to Turkey to stand trial.

"Now, we trust the U.S. government will hastily extradite Fetullah Gülen to Turkey to end the suffering of the fallen and wounded," the petition read.