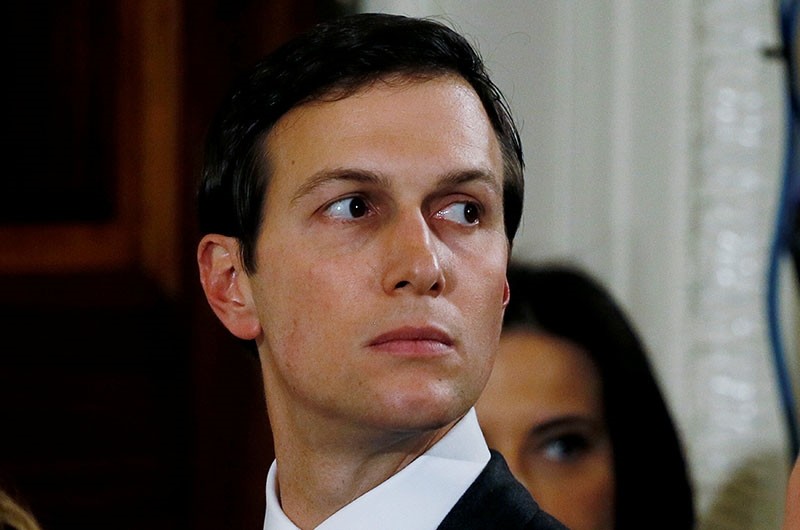 President Donald Trump's son-in-law and senior White House adviser Jared Kushner said in a statement to congressional committees on Monday that he "did not collude" with Russia or seek back channels with Moscow last year.

"I did not collude, nor know of anyone else in the campaign who colluded, with any foreign government," Kushner said in a written statement released before his appearance in closed-door meetings with members of the U.S. Congress.

"I had no improper contacts. I have not relied on Russian funds to finance my business activities in the private sector," he said.

Kushner said he had "perhaps four contacts with Russian representatives" during the 2016 campaign and presidential transition period after Trump's victory.

The 11-page statement , released hours before Kushner's closed-door appearance before the Senate intelligence committee, details the four contacts with Russians during Trump's campaign and transition. It aims to explain inconsistencies and omissions in a security clearance form that have invited public scrutiny.

In speaking to Congress, Kushner — as both the president's son-in-law and a trusted senior adviser during the campaign and inside the White House — becomes the first member of the president's inner circle to face questions from congressional investigators as they probe Russian meddling in the 2016 election and possible links to the Trump campaign. He is to meet with staff on the Senate intelligence committee Monday and lawmakers on the House intelligence committee Tuesday.

Kushner's appearances have been highly anticipated, in part because of a series of headlines in recent months about his interactions with Russians and because the reticent Kushner had until Monday not personally responded to questions about an incomplete security clearance form and his conversations with foreigners.

"I have shown today that I am willing to do so and will continue to cooperate as I have nothing to hide," he said in the statement.

The document provides for the first time Kushner's own recollection of a meeting at Trump Tower with the Russian ambassador to the U.S. to talk about secure lines of communications and, months earlier, of a gathering with a Russian lawyer who was said to have damaging information to provide about Hillary Clinton.

In the document, Kushner calls the June 2016 meeting at Trump Tower with Russian lawyer Natalia Veselnitskaya such a "waste of time" that he asked his assistant to call him out of the gathering.

Emails released this month show that the president's son, Donald Trump Jr., accepted the meeting with the idea that he would receive information as part of a Russian government effort to help Trump's campaign. But Kushner says he hadn't seen those emails until recently shown them by his lawyers.

Kushner said in his statement that Trump Jr. invited him to the meeting. He says he arrived late and when he heard the lawyer discussing the issue of adoptions, he texted his assistant to call him out.

"No part of the meeting I attended included anything about the campaign, there was no follow up to the meeting that I am aware of, I do not recall how many people were there (or their names), and I have no knowledge of any documents being offered or accepted," Kushner's statement says.

During the meeting, Kushner said he and Kislyak talked about establishing a secure line for the countries to communicate about policy in Syria.

"The Ambassador said that would not be possible and so we all agreed that we would receive this information after the Inauguration. Nothing else occurred," the statement said.

He also said he met with a Russian banker, Sergey Gorkov, at the request of Kislyak but that no specific policies were discussed.

Kushner also explained that his application form for a security clearance form was submitted prematurely due to a miscommunication with his assistant, who had erroneously believed the document was complete.

He said he mistakenly omitted all of his foreign contacts, not just his meetings with Russians, and has worked in the last six months with the FBI to correct the record.

In addition, Kushner described receiving a "random email" during the presidential campaign from someone claiming to have Trump's tax returns and demanding ransom to keep the information secret.

Unlike every other major presidential candidate over the last 40 years, Trump didn't release his tax returns during the campaign. Since taking office, he has continued to refuse.

Kushner said he interpreted the late October email as a hoax and that the email came from a person going by the name "Guccifer400." The name is an apparent reference to Guccifer 2.0, an anonymous hacker who has claimed responsibility for breaking into the Democratic National Committee's computer systems.

Kushner said the emailer demanded payment in Bitcoin, an online currency. Kushner says he showed the email to a Secret Service agent, who told him to ignore it.

Trump Jr. and Trump's former campaign manager Paul Manafort, who was also at the June 2016 meeting, were scheduled to testify before the Senate Judiciary Committee this week. But on Friday their attorneys said they remained in negotiations with that panel. The two men are now in discussions to be privately interviewed by staff or lawmakers, though the GOP chairman of the committee, Iowa Sen. Chuck Grassley, has said they will eventually testify in public.

The president took to Twitter on Monday to repeat his criticism of the investigations, and reiterate allegation against his former opponent and included a swipe at Attorney General Jeff Sessions, who was the subject of a scathing public rebuke by Trump in a New York Times interview last week. "So why aren't the Committees and investigators, and of course our beleaguered A.G., looking into Crooked Hillarys crimes & Russia relations?" the president tweeted.