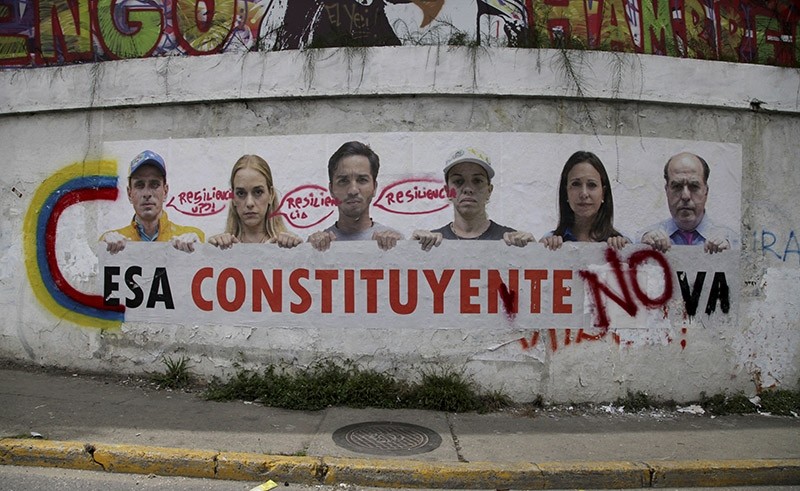 A poster that shows some of Venezuela's opposition leaders holding a sign with a message that reads in Spanish: ,That constituent assembly will not pass, is displayed on a wall near Altamira Square in Caracas, Venezuela, Aug. 3, 2017. (AP Photo)
by Compiled from Wire Services Aug 04, 2017 12:00 am

Venezuelan President Nicolas Maduro is heading toward a showdown with his political foes, promising to seat a new constituent assembly Friday that will rewrite the country's constitution and hold powers that override all other government branches.

Leaders of the opposition urged Venezuelans to fill the streets of the capital Friday, hoping to provide a strong showing that many people object to the assembly.

The body's 545 delegates were expected to be installed at the legislative palace in a room just yards (meters) from the chamber where the opposition-controlled National Assembly meets. Maduro, who has said he will use the assembly to punish his opponents, planned to attend the opening session.

The legislature building has been the scene of bloody clashes in recent weeks and the installation of the all-powerful assembly will intensify a political struggle that has brought three months of bloody anti-government protests to Venezuela. Maduro vows the assembly will strip opposition lawmakers of their constitutional immunity from prosecution, while members of congress say they will only be removed by force.

"The only way they'll get us out of here is by killing us," declared Freddy Guevara, the National Assembly's first vice president. "They will never have the seat that the people of Venezuela gave us."

The body marks a new stage in Venezuela's rule.

With unlimited powers to dissolve the National Assembly or amend laws, the new body is tasked with rewriting the 1999 constitution brought in under Maduro's late mentor and predecessor, Hugo Chavez.

Maduro claims its work will yank Venezuela out of its worsening spiral of political and economic crisis, though he has not detailed how. Nor has he given an end-date for the Constituent Assembly, which he said would operate for years.

The body is being challenged on several fronts.

Backing opposition allegations of fraud, Smartmatic, a British-based company involved in the vote technology behind the election last Sunday, said the official turnout figure had been tampered with and exaggerated by at least a million voters.

Although brushed off by Maduro as part of a plot by "the international enemy," that gave grounds for Venezuelan Attorney General Luisa Ortega -- a thorn in Maduro's side -- to order an investigation.

She said prosecutors had lodged court cases seeking to have the Constituent Assembly annulled, though few in Venezuela believed that would be achieved.

The country's supreme court has systematically sided with the president in blocking prosecutorial or legislative gambits against the government.

Using his daily appearances on state television, Maduro has lashed out at several of the 40 countries that admonished him for seeing through the creation of the new assembly.

After being hit with U.S. sanctions and called a dictator by U.S. President Donald Trump, Maduro said defiantly that he was standing up to what he called imperialism.

The Venezuelan leader also slammed Mexico, Chile and Peru as American vassals for saying they would not recognize the new assembly.

But with the European Union and other nations also condemning the Constituent Assembly, Maduro is fighting against a broad tide, even if he has support of Russia, which holds billions in Venezuelan debt, as well as Cuba, Bolivia and Nicaragua.

The uncertainty and unease surrounding the path Maduro has set Venezuela on has been reflected in an accelerating depreciation of the country's already debilitated currency, the bolivar.

It lost more than 17 percent of its value against the dollar on Thursday, placing scarce imported food and medicine further out of reach for many Venezuelans.

One analyst, Luis Salamanca, said the new assembly "is being born badly, but Maduro doesn't care. He just wants a Constituent Assembly that suits him."

According to Datanalisis, a polling firm, 72 percent of Venezuelans reject the assembly. And 80 percent reject Maduro's leadership.

But the president enjoys the backing of the military, as well as judicial and electoral authorities, allowing him to forge on.

"More than changing the constitution, the main goal is to govern without limits," said another analyst, Benigno Alarcon.