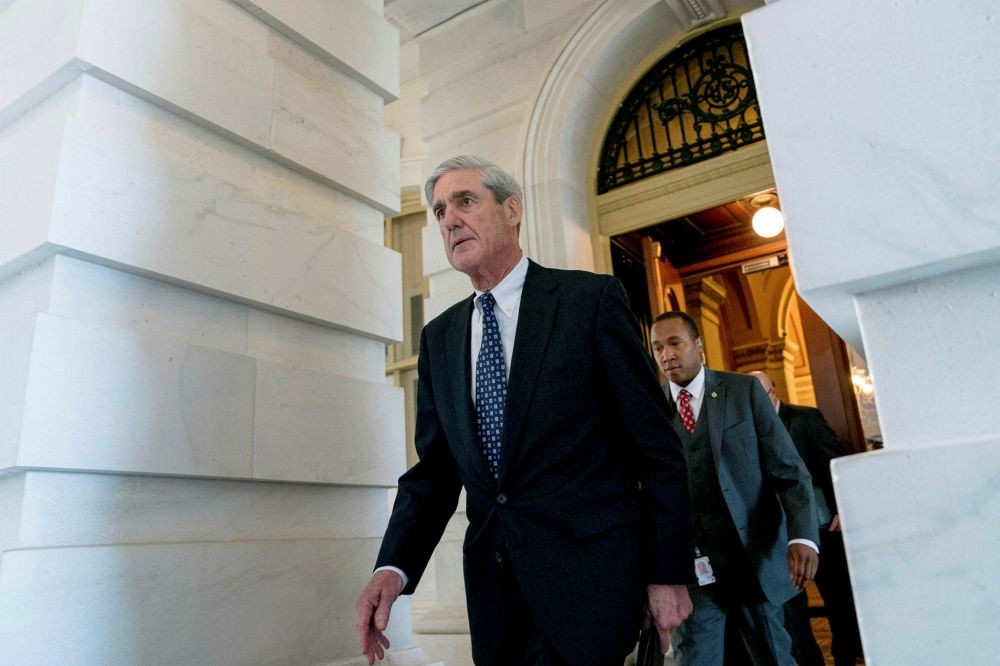 As Mueller prepares a grand jury on the alleged Trump-Russia collusion, WikiLeaks points elsewhere for the source of the leaks

While Special Counsel Robert Mueller prepares to use a grand jury for the special counsel investigating the alleged collusion of U.S. President Donald Trump's team, leaked audio of Seymour Hersh talking about Seth Rich and his role in the leaking of the infamous Democratic Party's emails has been highlighted by WikiLeaks.

The special counsel has been tasked with investigating whether anyone connected to Trump or his campaign was in contact with Russian officials regarding obtaining and subsequently releasing damaging material about Democratic candidate Hillary Clinton.

Mueller is reportedly looking into whether Trump himself knew of any such alleged proceedings. The probe is also investigating the meeting that Donald Trump Jr. had with a Russian lawyer.

They are also responsible for investigating the claim that Trump was engaged in obstruction of justice when he fired former FBI director James Comey while the Russia investigation was still ongoing.

It should be noted that no evidence has been released to the public regarding any collusion between the Trump team and the Russian government, especially regarding the leaking of internal Democratic National Committee (DNC) emails.

The New York Time's claim that all 17 United States intelligence agencies worked and agreed upon a comprehensive report in late 2016 targeting Russia as the guilty party is also a myth, which is why the paper, as well as the Associated Press, had to later publish a retraction and why the reports themselves were nothing more than speculation.

In fact, when asked to testify on the matter, former Director of National Intelligence James Clapper said: "Only three intelligence agencies were directly involved in this assessment, plus my office."

Trump has consistently denied any collusion with the Russian government and has, in fact, come out and stated if the investigation does turn up moles in his team then he would welcome the discovery.

Trump Jr.'s meeting with the Russian lawyer in Trump Tower in New York very early in the campaign had been made on the premise that damaging information might be exchanged, however no such thing occurred as the contact who sent him the email regarding the meeting had essentially lied to him to make the meeting happen. When he did meet with Russian lawyer Natalia Veselnitskaya, she apparently had nothing to say about the election itself and only spoke of a diplomatic issue between the United States and Russia regarding adoption rights of Russian children by U.S. citizens.

In fact, Donald Trump Jr. has since, on his own volition, released all of the emails he exchanged with his contact regarding the meeting on Twitter for all to see.

Trump's firing of Comey itself is also not an indicator that he was attempting to obstruct the investigation, as Comey was not the sole pillar on which the probe was standing and it continued after his exit. In fact, Comey's firing brought more heat on himself rather than on President Trump because when he was called to testify on the matter, he revealed that he had kept memos of conversations with the president and then leaked them to the press via a friend.

A grand jury can be used to force people to issue subpoenas, as well as to compel them to testify under oath.

As a powerful document, subpoenas can force one to produce documents that may otherwise have the right to maintain as private. If the person under the subpoena, literarily meaning "under penalty," does not comply with the request, which can also include appearing in court, they are subject to civil or criminal penalties.

They can also be used to uncover computer files, income tax returns, employee records as well as other private information.

The latest development in this Charlie-Foxtrot situation is the linking of a YouTube video by WikiLeaks on their official Twitter page with the claim that the man speaking is none other than investigative reporter Seymour Hersh.

The DNC emails, which had been leaked via an anonymous source to WikiLeaks and subsequently made public, were very damaging to the Clinton campaign, as they revealed that the party had deliberately undermined candidate Bernie Sanders and favored Clinton instead. Other scandals such as internal bickering and name-calling also proved to be quite detrimental.

Hersh, a Pulitzer Prize-winning investigative journalist, broke the story about the My Lai massacre in 1969 and its subsequent cover-up, as well as reported on the U.S. military's mistreatment of those detained at Abu Ghraib prison.

In the tape, Hersh, talking to Ed Butowsky, a wealthy Republican donor, seems to be suggesting that Seth Rich, a DNC staffer, may have not been murdered because of his involvement in the DNC email leaks, but that he was definitely the one who obtained the emails and handed them over.

Since WikiLeaks has a solid reputation of protecting its sources, it has never confirmed that the leaker was indeed Rich, however Julian Assange himself, as well as the official WikiLeaks Twitter page, have alluded to this several times, and even offered a $20,000 reward for any useful information.

Up until now, the murder of Seth Rich has largely been seen as a conspiracy theory, and even some Fox News pundits, such as Sean Hannity, got in political trouble for pushing the story.

Now, however, there seems to be more validity than ever to the claims that Rich was involved in the DNC email leaks.

Hersh also seems to imply that one of the reasons why the family was uncooperative was because Rich apparently wanted money for the leaked emails.

As to the motive of Rich leaking the emails, he was a big supporter of Bernie Sanders early on in the race and publicly disgruntled with DNC leadership for undermining him before his death.

So while his murder, suspicious as it may look, may not actually be connected to the leaks, the leaks themselves were probably made by Rich, which would exonerate any serious allegations of Russian hackers obtaining any DNC emails.