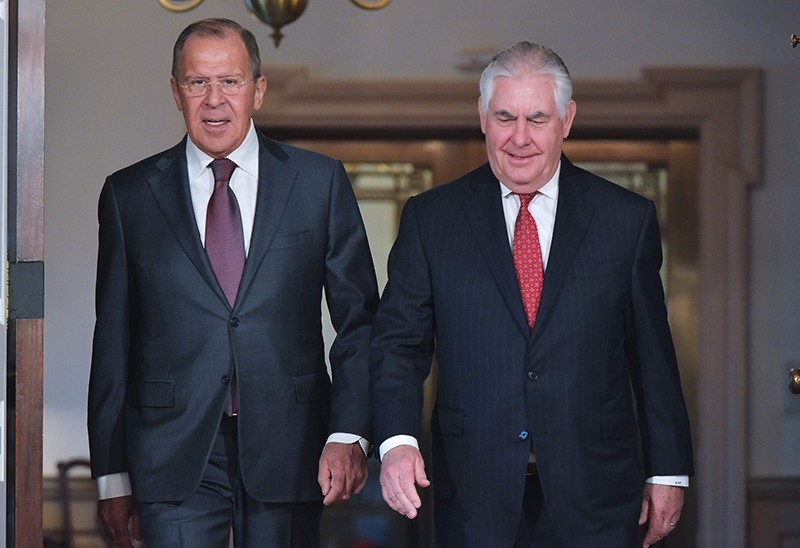 This file photo taken on May 10, 2017 shows Russian Foreign Minister Sergei Lavrov (L) and US Secretary of State Rex Tillerson (R) arriving for photos in the Treaty Room of the State Department in Washington, DC (AFP Photo)
by Compiled from Wire Services Aug 06, 2017 12:00 am

Russian Foreign Minister Sergei Lavrov said on Sunday he believed his U.S. colleagues were ready to continue dialogue with Moscow on complex issues despite bilateral tensions and the imposition of fresh U.S. sanctions against Russia.

"We felt the readiness of our U.S. colleagues to continue dialogue. I think there's no alternative to that," Lavrov said after what he said was a lengthy meeting with U.S. Secretary of State Rex Tillerson on the sidelines of an international gathering in Manila.

Neither Tillerson nor Lavrov responded to a shouted question about how the new U.S. penalties might affect their discussions.

More than an hour later, Tillerson emerged from the meeting and boarded his motorcade without commenting.

Tillerson and President Donald Trump opposed the sanctions package, passed by Congress in July, that makes it harder for Trump to ever ease penalties on Russia. Trump signed the bill last week, but called it "seriously flawed."

The White House said Trump's opposition stemmed from the bill's failure to grant the president sufficient flexibility on when to lift sanctions. Trump's critics saw his objections as one more sign that he is too eager to pursue closer ties to Russia, or to protect the former Cold War foe from penalties designed to punish Moscow for its actions in Ukraine, election meddling and other troublesome behavior.

Even so, Trump's administration has argued there's good reason for the U.S. to seek a more productive relationship. Tillerson has cited modest signs of progress in Syria, where the U.S. and Russia recently brokered a cease-fire in the war-torn country's southwest, as a sign there's fertile ground for cooperation.

Yet Russia continues to chafe at the suggestion it interfered in the U.S. election. The former Russian ambassador in Washington, Sergey Kislyak, denied those allegations in an interview Saturday on Russian state television. He said he was merely carrying out his duties as a diplomat when he met with members of Trump's campaign team.

"Any diplomat, Russian or not, works to better understand the policy of a country he's posted to, figure out what the new administration's course is and understand where cooperation is possible," Kislyak said.

Trump denies any collusion and has repeatedly questioned U.S. intelligence about Moscow's involvement. Trump has tried to turn the issue into a political rallying cry, arguing that the controversy is an attempt by Democrats and the media to undermine the many millions of Americans who voted for him.