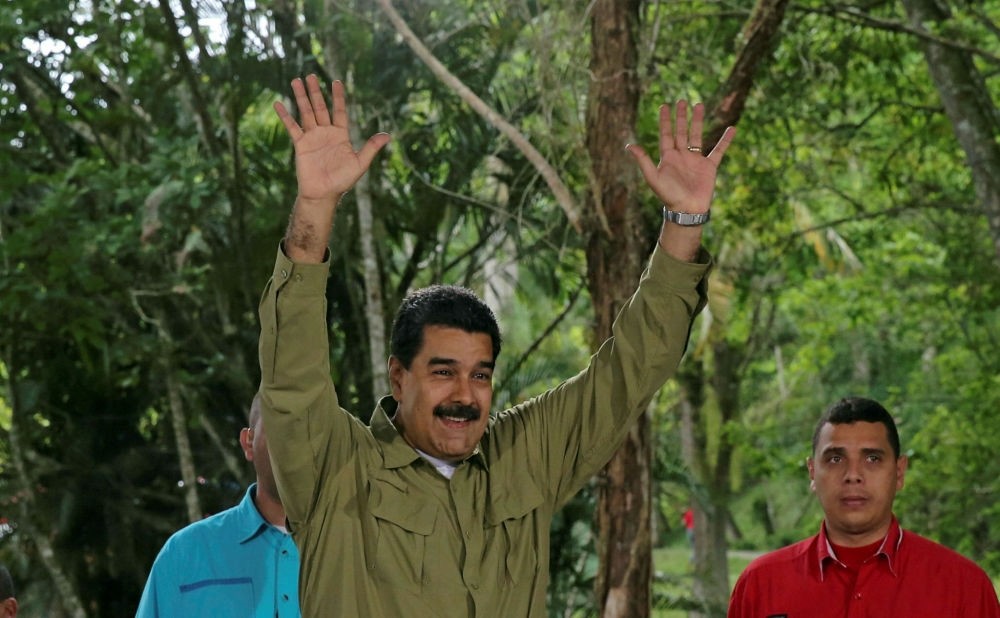 Venezuelan authorities quelled a coup attempt on Sunday as terrorists attacked a military base near the city of Valencia. President Nicolas Maduro vowed that a band of terrorists who attacked a Venezuelan army base will get the "maximum penalty" as his administration roots out his enemies. Maduro also held the United States and Colombia responsible for the attempted coup.

"We know where they are headed and all of our military and police force is deployed," Maduro said. He said he would ask for "the maximum penalty for those who participated in this terrorist attack."

Troops killed two of the 20 intruders who slipped into the Paramacay base in the central city of Valencia early Sunday, apparently intent on fomenting a military uprising, Maduro said in his weekly broadcast on state television. One of the invaders was injured, seven captured and 10 got away, the embattled leader said.

The pre-dawn raid coincided with a video that circulated on social media showing more than a dozen men in military uniform announcing an uprising to restore constitutional order.

Locals said a nighttime curfew was imposed. Police dispersed protesters who had set up flaming barricades across roads. The armed forces said in a statement "a group of civilian criminals wearing military uniforms and a first lieutenant who had deserted" carried out the attack. Maduro said the lieutenant, among those captured, was "actively giving information and we have testimony from seven of the civilians."

The attack came as Venezuela's constitutional assembly is getting down to work. The new assembly voted to remove the nation's outspoken chief prosecutor Saturday. On Sunday, Maduro announced that a new "truth commission" created by the assembly had been installed to impose justice on those fueling the unrest that has wracked the country since early April.

The constitutional assembly is expected to meet again today, while lawmakers in the opposition-controlled National Assembly scheduled their own session yesterday, vowing to continue fulfilling their responsibilities no matter what the assembly might do. Leaders of opposition groups, which boycotted the July 30 assembly election, called for renewed protests.

The Maduro government has long been threatened by international condemnation led by Washington. "The United States condemns the elections... for the National Constituent Assembly, which is designed to replace the legitimately elected National Assembly and undermine the Venezuelan people's right to self-determination," U.S. State Department spokeswoman Heather Nauert said in a statement. It threatened further "strong and swift" sanctions on Maduro's government.

The head of the CIA, Mike Pompeo confessed earlier that the agency is working to overthrow the Venezuelan government and have collaborated with two countries in the region; Colombia and Mexico.

Venezuela's latest bout of political unrest erupted in protest to a Supreme Court decision in late March ordering the National Assembly be dissolved. The 54-year-old socialist leader has faced months of protests from right-wing opposition. Pro- and anti-Maduro demonstrations in Venezuela have left more than 120 people dead since April 1. Demonstrators are demanding general elections, measures to alleviate a brutal economic crisis, freedom for hundreds of jailed opposition activists, and independence for the opposition-controlled National Assembly legislature. Maduro says they are seeking a coup against him with the encouragement of a U.S. government eager to gain control of Venezuela's oil reserves, the largest in the world.

He accused the United States of "imperialism" after it hit him with direct sanctions and threatened to do the same with all of the assembly's members. And he lashed out at fellow Latin American leaders of the thirteen countries in the 35-member Organization of American States, a regional political bloc.