Southern secessionist movement persists in US 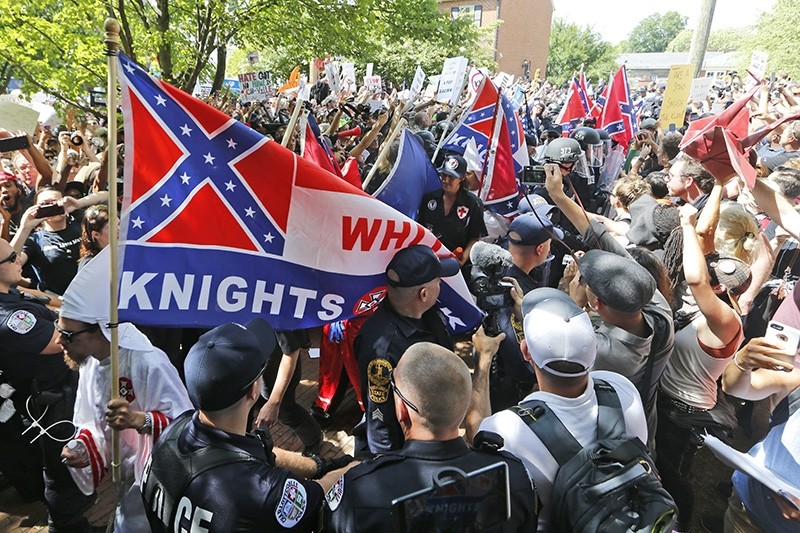 This July 8, 2017 photo shows members of the KKK escorted by police past a large group of protesters during a KKK rally in Charlottesville, Va. (AP Photo)
by Associated Press
Aug 12, 2017 12:00 am

As 21st century activists seek to topple monuments to the 19th century Confederate rebellion, some white Southerners are again advocating for what the Confederates tried and failed to do: secede from the Union.

It's not an easy argument to win, and it's not clear how much support the idea has: The leading Southern nationalist group, the Alabama-based League of the South, has been making the same claim for more than two decades and still has an address in the U.S.A., not the C.S.A.

But the idea of a break-away Southern nation persists.

The League of the South's longtime president, retired university professor Michael Hill of Killen, Alabama, posted a message in July that began, "Fight or die white man" and went on to say Southern nationalists seek "nothing less than the complete reconquest and restoration of our patrimony — the whole, entire South."

"And that means the South will once again be in name and in actuality White Man's Land. A place where we and our progeny can enjoy Christian liberty and the fruits of our own labor, unhindered by parasitical 'out groups,'" said Hill's message, posted on the group's Facebook page a day after a rally in support of a statue of Confederate Gen. Robert E. Lee in Charlottesville, Virginia.

The group's website says it is "waging a war to win the minds and hearts of the Southern people,"

While white-controlled government is its goal, the group says in a statement of beliefs that it offers "good will and cooperation to Southern blacks in areas where we can work together as Christians to make life better for all people in the South."

Hill said they're not advocating for a repeat of a Civil War that claimed 620,000 lives or a return to slavery, the lynchpin of the South's antebellum economy.

"We have no interest in going back and recreating an un-recreatable past," Hill said in a telephone interview. "We are future oriented."

The group has erected billboards that said "SECEDE" in several states, and it even has its own banner — a black and white version of the familiar Confederate battle flag, minus the stars.

Secession also finds support on some websites that support white nationalism, including Occidental Dissent, run by a Hill associate, and the openly racist, anti-Semitic Daily Stormer. Extremist watchdog Heidi Beirich said strict Southern nationalism seems to have been swept up into the larger white-power agenda in recent years.

"I think it's mostly subsumed into the white nationalist movement," said Beirich, director of the Intelligence Project at the Southern Poverty Law Center. "There might be a little Southern softness to it. But I can't tell a whole lot of difference between the League and white nationalism."

Meanwhile, critics are howling over the mere idea that HBO is considering a dramatic series based on the idea that the South really did secede again and slavery still existed.

But secession isn't the sole property of Southern white nationalists.

A group that wants California to secede from the United States is based mainly on liberals wanting to exit the United States because of President Donald Trump's election. They are collecting signatures to place a secession ballot initiative on the 2018 ballot.

The initiative would form a commission to recommend avenues for California to pursue its independence and delete part of the state constitution that says it's an inseparable part of the United States. The "Calexit" initiative also would instruct the governor and congressional delegation to negotiate more autonomy for California.

Secession also has been discussed on and off for years by the far right in states including Texas, particularly when Barack Obama was president.

Online, many Southern nationalists seem animated by drives to remove Confederate memorials, as happened in New Orleans and is planned in Charlottesville, Virginia. Not everyone who supports Confederate monuments wants to remove the South from the United States once again. Some supporters of the Old South say they simply want to honor ancestors who wore the gray during the Civil War.

But some want to make a break.

Thompson's 2012 book "Better Off Without 'Em: A Northern Manifesto for Southern Secession" argued that both the United States and the South might both be best served if Southern nationalists won the argument and succeeded in forming a new nation.

The South has been at odds with the rest of the nation for generations over issues including education, race, politics, shared history and religion, Thompson said in a telephone interview, and some things just don't change.