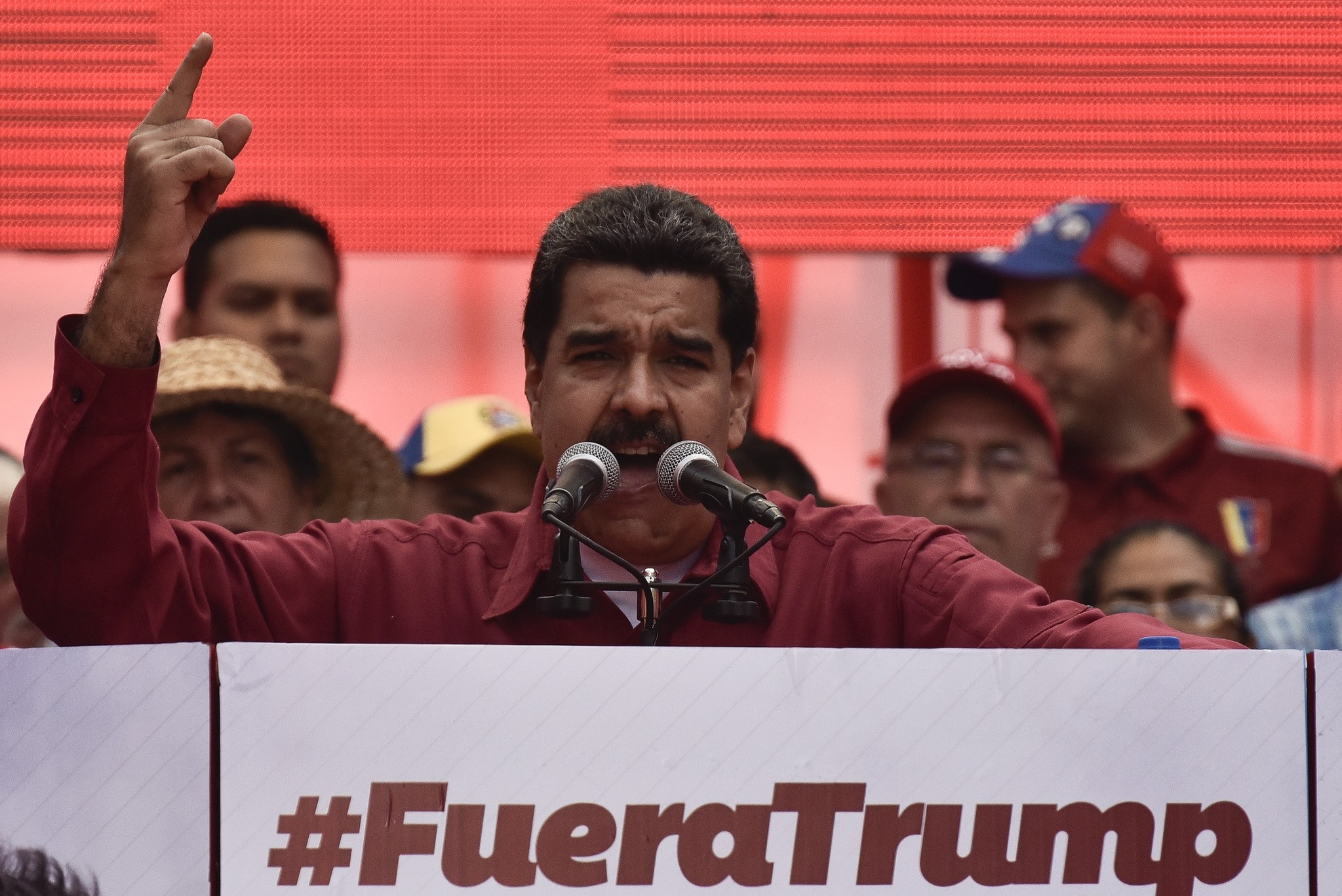 Venezuelan leader Nicolas Maduro ordered the army to conduct a round of military drills later this month in response to US President Donald Trump's threat of military action in the crisis-stricken nation.

Maduro's embattled government -- facing a deepening economic emergency and swelling street protests -- has seized on Trump's apparent threat, which has been roundly condemned even by Latin American states opposed to the socialist president.

Maduro told a crowd of supporters in Caracas on Monday that he had organized a round of military drills for August 26-27 in response.

"I have given the order to the armed forces' joint chiefs of staff to start preparations for a national civil-military exercise for the integrated armed defense of the Venezuelan nation," he said.

Trump said on Friday that the US was mulling a range of options against Venezuela, "including a possible military option if necessary."

His words have bolstered Caracas's oft-repeated claim that Washington has designs to grab control of its proven oil reserves, the largest in the world.

The Pentagon said it had received no orders from Trump to ready any sort of military action against Venezuela.

US Vice President Mike Pence, who is touring allies in Latin America to marshall joint action against Caracas, said Trump's warning stood -- but he hoped a "peaceable solution" would be found.

Supporters of Maduro, who has been in power since the death of the revolutionary socialist Hugo Chavez in 2013, packed the streets of Caracas Monday in a show of support for the beleaguered leader.

The crowd chanted "Yankee go home!" as participants waved banners emblazoned with the slogan: "Trump out".

Maduro vowed to defend his country "with tanks, planes and missiles."

Venezuela, an ally to Cuba and Russia, reportedly bought Russian anti-aircraft defenses and tanks years ago under Chavez.

Pence, on his first stop of a tour taking in Colombia, Argentina, Chile and Panama, said the United States intended to prevent Venezuela becoming a "failed state."

"We will not stand by as Venezuela crumbles, but it's important to note, as the president said, that a failed state in Venezuela threatens the security and prosperity of the hemisphere," Pence told reporters in the Colombian city of Cartagena on Monday.

He told CNN that Venezuela risked becoming "a greater problem for narcotics traffic" and "greater migration" -- both of which he said directly threatened the security and economy of the US.

Opponents of Maduro accuse him of seeking to consolidate power by packing a controversial new assembly with his allies as inflation spirals out of control and food shortages worsen.

The body has joined with the loyal supreme court to quash dissent and arrest opposition politicians.

But Trump's threat of military action has united even Maduro's enemies in condemnation.

Colombian President Juan Manuel Santos, who has led criticism of Maduro, told Pence on his arrival "that the possibility of a military intervention shouldn't even be considered."

Former Venezuelan mayor and prominent opposition figure Ramon Muchacho said from exile in the United States that perhaps a US invasion was "inevitable."

"The United States thinks Venezuela is a danger," due to its ties to Iran, Russia and others, he said on CNN.

Many Latin American countries have bitter memories of past US adventures in the region. Those include invasions, gunboat diplomacy and the propping up of military dictators.

Even the Venezuelan opposition coalition on Sunday rejected "the use of force, or the threat of applying such force, by whatever country against Venezuela."

Maduro, in a later televised event with various ambassadors stationed in Caracas, said he wanted a regional "closed-door presidential summit" to talk about Venezuela and Trump's threat.

"The threat of war can only dissipate with dialogue," he said.

Washington has already imposed unilateral sanctions on Maduro and nearly two dozen of his officials for what it sees as a shift to "dictatorship."