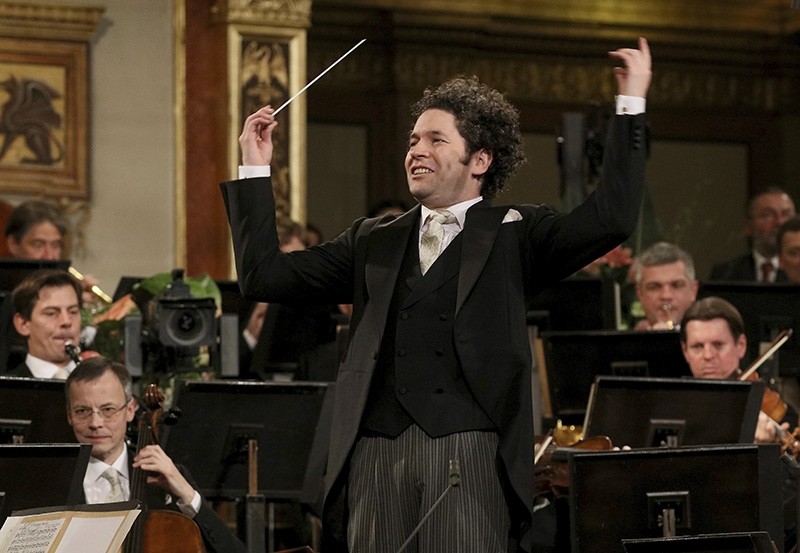 In this Jan. 1, 2017 file photo, maestro Gustavo Dudamel of Venezuela conducts the Vienna Philharmonic Orchestra during the traditional New Year's Concert at the Golden Hall of the Musikverein in Vienna, Austria. (AP Photo)
by Associated Press Aug 19, 2017 12:00 am

President Nicolas Maduro has angrily blasted Venezuela's classical music maestro Gustavo Dudamel, accusing his one-time supporter of being duped into criticizing the government that has for years been one of his biggest promoters.

"I hope God forgives you," Maduro said in a televised appearance on Friday, swiping at the Venezuelan-born conductor for roving around Madrid and Los Angeles while his compatriots build a revolution that he once helped glamorize.

"Welcome to politics, Gustavo Dudamel. But act with ethics, and don't let yourself be deceived into attacking the architects of this beautiful movement of young boys and girls," the socialist leader said.

Maduro was referring to Dudamel's longtime association with Venezuela's world-famous El Sistema musical education program. Dudamel, 36, began studying music as a child in El Sistema and has continued to tour with its ensembles the world over even after becoming the Los Angeles Philharmonic's musical director a decade ago.

But he joined a growing cadre of internationally-known Venezuelan athletes and celebrities and publicly broke with the government in May after a member of El Sistema was killed amid a wave of protests that went on to kill more than 120 people.

In an online essay titled "I Raise My Voice," Dudamel urged Maduro to reduce political tensions by listening to instead of cracking down on youth protesters. In July, he went further, calling on Maduro to scrap his plans to rewrite the constitution, a move condemned by dozens of foreign governments as an illegitimate power grab

"Our country urgently needs to lay the foundation for a democratic order that guarantees social peace, security and a prosperous future for our sons and daughters," he wrote in a column published in the New York Times.

Maduro's rebuke comes as Dudamel is scheduled next month to conduct the National Youth Orchestra of Venezuela in a four-city U.S. tour — concerts that may now be in doubt as his relations with the Maduro government sour. Last month, on the eve of the elections for the questioned constitutional assembly, Dudamel and the Simon Bolivar Symphony Orchestra abruptly canceled a series of shows in Colombia's capital, citing unspecified logistical problems.

There was no immediate response by Dudamel to Maduro's criticisms.

The world-famous El Sistema, created more than four decades ago, is one of the rare institutions to have survived — even thriving — under the 17 years of socialist rule. The program connects about 400,000 Venezuelan children, many of them poor, with classical music, and has been emulated by music educators in dozens of countries.

While Maduro seemed betrayed, his opponents and fellow classical music performers appear in no mood to embrace Dudamel, who they've long accused of being too cozy with the increasingly autocratic leader. Still fresh in many people's minds is Dudamel's appearance alongside Maduro during an earlier wave of deafly unrest in 2014 while reviewing architectural plans for a Frank Gehry-designed concert hall to be built in the conductor's name.

Gabriela Montero, a world-renowned Venezuelan pianist, in an essay published this week called Dudamel the "king of silent complicity and equivocation."